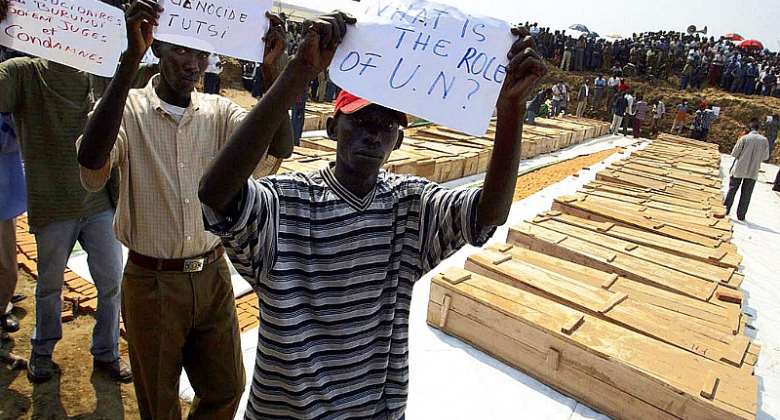 Men hold up protest signs in front of the coffins of DRC refugees killed in August 2004 in Gatumba, Burundi. - Source: Simon Maina/AFP via Getty Images

For nearly three decades, the Democratic Republic of Congo (DRC) has been embroiled in violence. Millions of people have been killed and an estimated 5.6 million others displaced by civil wars, local feuds and cross-border conflicts. The neighbouring countries of Uganda, Burundi and Rwanda have been locked into this ongoing cycle, too.

The First Congo War began in 1996, with a coalition of the DRC's neighbours supporting a rebel group that toppled the dictator Mobutu Sese Seko. Laurent Kabila was installed as head of state in 1997. A year later, however, a bloodier war began amid violent jostling for power and influence.

In December 2002, a peace deal was signed. The DRC got a national army and new constitution. Democratic elections were held in 2006, the country's first in more than 40 years.

But the violence soon resumed. Consolidating peace efforts across the vast territory proved difficult. Since then, the Congo has received tens of billions of dollars in humanitarian aid and hosts one of the largest United Nations peacekeeping missions .

Various studies have fronted several reasons for the persistence of war in the Congo. These include flaws in the 2002 peace deal, a Congolese elite that benefits from the chaos and ethnic intolerance .

The events that have shaped the DRC mean different things to different actors. The fact that Africa's largest country has over 250 ethnic groups gives a sense of the complexity of its plight.

Read more: How conflicts intertwined over time and destabilised the DRC – and the region

My research adds to debate on the factors driving the violence. I focused on the narratives of Banyamulenge soldiers. The Banyamulenge are a sub-group of the Congolese Tutsi ethnic group, and originally come from the province of South Kivu in eastern DRC.

They are an important constituency to consider because their experiences offer a window into past and current Congolese conflicts.

They illustrate how violence in the Congo multiplies across borders, blurs the lines between victim and perpetrator, and is used to win a place in government rather than to overthrow it.

From my research, I believe that to stop the cycle of violence, the DRC and its regional allies need a new status quo that doesn't reward rebellion but decreases its appeal. Politics that facilitates peaceful livelihoods is essential.

In August 2004, 166 members of the Congolese Banyamulenge community were killed in Gatumba , a small town in Burundi near its border with DRC. They were at a UN-protected refugee camp.

The killings were perpetrated by a group of armed rebels, many of them from the Forces for National Liberation, a Burundian Hutu militia group. The group claimed their Banyamulenge victims were planning a new war in the Congo.

I spoke to survivors of the 2004 massacre. Most felt that the attack wasn't a one-off event, but part of a pattern of mobilising anti-Tutsi violence.

This began before Gatumba and persists into the present day.

An archive of Gatumba survivor accounts that I was involved in curating attests to this ongoing persecution and the wider dysfunctions of the region. These include the lack of robust democracy or transparent governance, and high levels of insecurity.

Like most participants in Congolese conflicts, the rebels and refugees involved in the Gatumba massacre regularly crossed the DRC's border. The Banyamulenge refugees fled to Burundi to escape turmoil in South Kivu in 2004 . The Forces for National Liberation moved between DRC and Burundi to recruit, fight and cooperate with armed groups in both countries.

These porous borders have allowed armed groups – like the Ugandan Allied Democratic Front and Congolese-Tutsi March 23 Movement – to use the DRC as a base and battlefield, connecting civil conflicts across borders.

Gatumba was a border refugee camp. Hutu rebels found an easy target in Banyamulenge refugees, whom they associated with the Tutsi rebels behind the violence in the DRC.

The Forces for National Liberation deployed religious-flavoured anti-Tutsi rhetoric to motivate their political base. But there's rarely a straight line between politics and ethnicity. The Hutu rebels were in political competition against other Hutu-labelled militias and parties.

The March 23 Movement, for instance, provides anti-Tutsi fodder for extremist politicians across the DRC. These politicians benefit from promoting discrimination and hate speech , and fuelling protests against the UN mission. The movement's use of force has hardened lines between Tutsis and other Congolese.

The Forces for National Liberation, like other rebel groups, committed atrocities to improve its bargaining position in peace talks.

By 2004, other Burundian rebels had cut a peace deal with the Burundi government to become politicians and army officers. The Forces for National Liberation was marginalised. It, therefore, stopped trying to overthrow the state and focused on killing civilians, hoping to use the threat of terrorism to negotiate its way into power. It worked.

Agathon Rwasa, the leader of the Forces for National Liberation, signed a deal. He now leads Burundi's opposition party in parliament and has not gone to trial for any crimes.

This elevation of a guerrilla into government is not unique to Burundi.

Rebel groups in the DRC typically aren't looking to overthrow the state. Instead, they're using rebellion to prove themselves a threat. They then sue for limited peace and an improved position either in DRC or in neighbouring countries like Burundi or Uganda.

As one Gatumba survivor observed:

the reward for killing people is a promotion in our country.

It's been 18 years since the Gatumba massacre. Groups like the Banyamulenge Gatumba Refugee Survivors Foundation are working internationally to pursue accountability and justice. Yet, addressing their own community's past and current involvement in DRC's multi-directional violence is largely taboo.

Until a broader sense of the past is more widely shared among Congolese groups, rebels will flit across borders, civilians will be both victims and perpetrators, and groups will purchase political power with demonstrations of violent disruption.

Interstate collaboration between the DRC and Burundi governments for justice in Gatumba would be a first step towards building a future without impunity.

Ezra Schrader, a research assistant at the Strassler Center for Holocaust and Genocide Studies with the Gatumba Survivors Project, contributed to this article.