Prophet Owusu Bempah is neither a man of God, nor does he understand the bible - tell him for me! 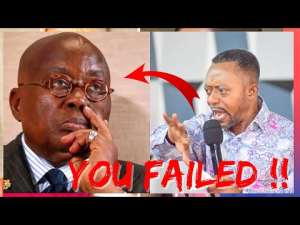 Prophet Owusu Bempah, the son of Juaben-Ashanti soil, the founder and leader of Glorious Word Power Ministry International has proved himself incapable of accepting the reality. He does not understand the very bible upon whose principles he founded his church.

Is he actually a man of God? I doubt it. However, if he is, could someone convey it to his attention that his own senior Juaben compatriot, Rockson Adofo, says his actions and pronouncements following his arrest by the Dampare police give him away as someone who is totally deficient of the knowledge of the bible and the mysterious ways God works in the lives of individuals.

Is he aware of how Stephen’s life ended? “In the Acts of the Apostles Stephen was one of seven deacons appointed by the Apostles to distribute food and charitable aid to poorer members of the community in the early church. He is recognized as a saint and the first martyr in Christian theology. He was condemned for committing blasphemy against the Jewish Temple, and was stoned to death”

Was he not more honourable, trustworthy and saintly in the sight of God, Jesus Christ and the Holy Spirit than Prophet Owusu Bempah, yet he was stoned to death while in the service of God? Did he accuse God of not saving him from the hands of his accusers and assassins? NO!

Look at the fate of the biblical Job. Did he not suffer more than a hundredfold of the problem of arrest that Prophet Owusu Bempah has undergone? Yet, he kept his faith in God until things became much better several years later.

When the friends and family members of Job were goading him to denounce God and die, he refused, although he was in unprecedented life’s agony. In the end, Job once again became not only twofold more prosperous but God’s love for him increased tremendously.

Apostles Paul, Peter and a host of others, all died unnatural deaths, all because of their faith in God and for being in the service of God. They were variously accused of blasphemy and murdered.

If you decide to become a man or prophet of God, you will not have it easy at all, unless you a charlatan. Therefore, Prophet Owusu Bempah should cease being that sore bitter at President Nana Akufo-Addo for not stepping in to set him free when he was nabbed by the police for behaving irresponsibly.

He had followed his gun-toting junior pastors on intent to dealing drastically with that useless loquacious criminal woman called Agradaa. By roaming the streets like dimwit macho men proclaiming to going to kill or deal drastically with Agradaa, who did Owusu Bempah think he was?

He was taking the laws into his hands to act criminally in the false belief that nothing could happen to him were he caught because he was friends with President Nana Akufo-Addo.

He should rather be ashamed of himself by putting the integrity of the president on the line. If he had not been arrested, many in Ghana would have said it is because he is the friend of the president. This could have permitted other criminals to do same, citing Owusu Bempah’s case as a precedent in their defence.

Nana Akufo-Addo, as a renowned lawyer and a president who believes in the rule of law and the right of persons, had done the right thing by leaving the law to take its natural course with Owusu Bempah without intervening for whatsoever reason.

If Owusu Bempah understood the bible and appreciated how God works for the benefit of all, he will not be making irresponsible noises in public and before his congregation on intent to cause public disaffection for the president, his government and the NPP. God could have let that to happen to warn others to not disobey the laws of Ghana. Once laws are obeyed and enforced, Ghana could make strides in her political, economic and social emancipation.

It is the abundance of lawlessness committed with impunity that Ghana is wobbling in socio-politico-economic stagnation.

How on earth should one expect the president to commit further lawlessness by intervening to set them free when they have committed acts of lawlessness and are caught in the grips of the law? This is what Owusu Bempah was expecting the president to do to give credence to criminals to pursue their crimes with vigour.

Owusu Bempah is once again reminded by me that it was not by his conditional prophecies in favour of NPP and Nana Akufo-Addo that won them both elections 2016 and 2020.

Does he know the efforts made by others? Does he know anything about the day round trip from Ghana to London and back to Ghana in December 2016?

Does he know the contributions made by DJ Sources of Sources radio UK and Abaawa of Abaawa radio UK and Nana Akufo-Addo ladies of London/UK?

Owusu Bempah should not be blowing his horns as though, it was by his unique efforts that Nana Akufo-Addo and NPP won the elections hence he can hold the president to ransom.

Now, he has been making his same useless conditional election prophecies as though, God has appointed him lord over Ghana‘s general elections.

The last time I checked, he had prophesied about God revealing to him which party will win election 2024 and who will become the president but he will not disclose it to the public until much later. This is a cock and bull story or prophecy.

Is it any wonder if he comes out to say that the NDC will win as it is his intention? Who does not know that Ghanaians change their government every eight years? Who does not know that Ghanaians, as non-politically savvy as they are, are blaming the president and his government and party for the current economic hardships facing the country, although the current economic crisis is a worldwide phenomenon?

I had previously published some articles castigating Owusu Bempah for his conditional general election prophecies. This is a few years ago.

Any politically savvy Ghanaian can predict election results taking into account the prevailing conditions and the thinking of the electorate. Does that make the person predicting the correct result a prophet?

Don’t we have election pollsters using opinion polls to tell which political party or person will win an upcoming election? Does that make them prophets with the power to foretell things?

If Owusu Bempah had accepted his fate as something God was using to rid Ghana of lawlessness, it will have helped the country a lot. However, since he takes things personal and from human perspective, he is bitter towards the president, casting insinuations at him.

Owusu Bempah should be ashamed of himself.

I was peeved when I came across the underlying video made by him. He should rather be apologising to the president for tarnishing his reputation by his friendship with him. He should not think Nana Akufo-Addo will stoop too low as John Mahama once did to free those three NDC rogues who had threatened to kill and rape Supreme Court judges from their prison sentence.

Owusu Bempah should cogitate about the content of this publication and interpret them in the view of the bible and how Singapore has become an economic giant in the world.

By the Singapore way, it was the jailing of their Vice President that changed the country for good hence its envious prosperity.

Inflation will remain high till the end of first quarter of ...
31 minutes ago