As The Danger Of Terrorism Under Buhari’s Government Blows Up, What Stops All 36 State Governors From Modeling Edo State Police Forest Based System? Nothing 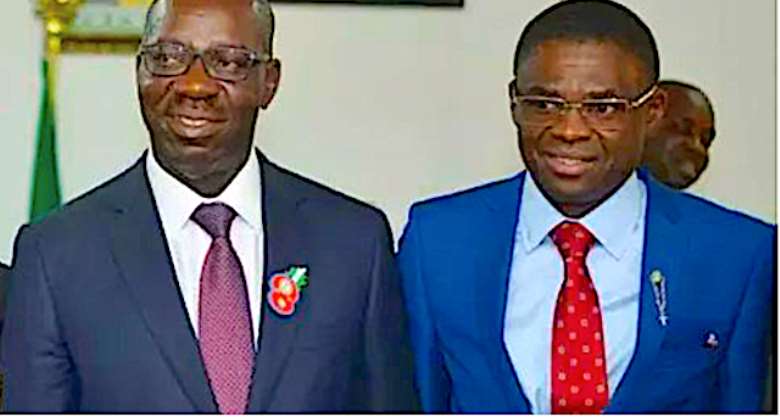 Terrorists from various locations and forest continue to attack across the country, including Abuja, the nation's capital. Godwin Obaseki a forest state governor, and his administration is on its way to establishing a forest police to go after the troubling pattern of terrorist attacks in a predominantly forest region like Edo state, serving as a model for other states dealing with domestic terror.

As the danger of terrorism grows under President Muhammadu Buhari’s lethargic security and economic government, why won’t all 36 state governments model the Edo state governor as he establishes a state police forest-based system? Can the feeble federal government stop it constitutionally? I think not.

Regarding militant Islamist groups fighting to dominate the Nigerian space, Islamic terrorists thinking they can through a campaign of attacks and violence enter every region including Edo state forest zones in Nigeria and create an Islamic state. The Nigerian current core leadership under President Muhammadu Buhari, all with similar backgrounds in Islamism must be questioning themselves about the fundamentals of insecurity in Nigeria. Why are security problems suddenly so toxic and consuming for our administration? It is due to our self-made conflict by not using democracy as the main national ideology, instead of us using ethnic, regional, and Islamic interests to define leadership, resulting in all sorts of visible and invisible security issues. How do we start making democracy the all-around ideology of the nation?

Federal law enforcement and security operations like the Nigerian Army, the Nigeria Police Force, Nigerian Security and Civil Defence, and the Nigerian Correctional Service, among others, now have these terrorists bringing battle to the president’s doorstep. Sad.

The leadership and people of Edo state that is in the Midwest Forest zone of Nigeria knows that as a matter of reality they must do something themselves.

Most Nigerians, including Buhari himself, will agree that this type of ‘right in your face’ terror and insecurity is Nigeria's most dreadful damage since the civil war.

Reportedly, most attacks are conducted by Boko Haram or/and Islamic State West Africa (ISWA) and others. These Islamic terrorist sects, among other places, operate from sometimes impassable forests and swamps that shelter these jihadists, and over and over, President Buhari and his circle direct the Nigerian Army to work with the police to flush out terrorists from forests around the country, yet failure persists.

With terrorists roaming ungoverned forests and exploiting the absence of police, there is bad news for these kidnappers, bandits, and terrorists as independent forest police and other related guards under state control are being established, beginning with Edo state.

As a police scientist and forensic psychologist, I believe this state's right to secure its people and property should extend to the establishment of a State Border Police in order to expand security protection of the land.

The string of attacks, indiscriminate killings, and disastrous murder by terrorists who are killing anyone with explosives and Ak-47 guns, including Muslims and Christians, is stomach-turning as they do this in the name of strict Islamic piety and holiness.

The Edo state governor and other progressive governors are aware that common sense shows that every state in the federation has not been ensured the security of lives and property they deserve, and governors as chief security chiefs in each state are just chiefs in name, and that must stop now.

Buhari, Malami, Baba, Monguno, Magashi, Bichi, and Lawan, and others have collectively failed the nation and the people, and as a result, there is no credibility to question any state governor, including Edo state Godwin Obaseki, who is constitutionally and morally required to take responsibility for security in their states. All Obaseki and others must do is to bring security and stability to their states.

President Buhari and mostly northern leaders have repeatedly rejected state police for the sake of not wanting state police. Well, that’s their choice as forest state police, beginning with a forest-dominated state like Edo state is here. The people put the onus on governors to obtain the critical equipment to protect them and they must use their respective legislatures to make good on the promise to protect their people.

In fact, security outfits like Ebubeagu in the east, Amotekun in the west and even the Kano State Hisbah Corps, a religious police force in Kano since 2003, all should transform and stop bad things happening to their people, as it is their moral and constitutional imperative to secure properties and people in their regions.

Let me say that one major role of the Edo Forest police will be the prevention and suppression of terrorism and reduce forest destruction and related areas, unlike the reactive nature of policing in Nigeria. It important that I quickly add here that potential forest police officers should receive training from non-traditional police academies and should only be admitted to such 7-to-12-month newly created academies after receiving family background, financial, psychological, medical, and physical agility screening and exams to determine if they have the right to be a police officer. Modern professional and ethically driven evaluators and trainers with vast experience in empirically validated police-related measures should lead the new academies to avoid the same old type of policing character and outputs.

Edo State is renowned for being home to massive forest reserves spread across multiple communities. It is only right that Edo State is secured directly by its government and not waiting for any faraway security chief in the now anemic and toxic capital of Nigeria.

Buhari and his team should focus on using its federal police and other federal security agencies to ensure that the president is not kidnapped and that attacks on the presidential guards’ brigade and soldiers at military checkpoints do not reoccur.

The National Security Adviser, Monguno, alongside the Inspector General of Police, Baba, with an apparent helpless face and discomfort, admittedly and recently said people are getting exhausted and are beginning to move towards other means of self-help.

In his own words, he said, “We are in a very difficult situation. And Council understands. Mr. President understands people’s concerns about the growing insecurity. But I can assure you that there’s no straight cut and dried method of dealing with this thing unless all of us embrace each other.” “I know people are weary, people are tired, people are beginning to gravitate to other places for self-help. The truth is that help is rooted in everyone working for the other person.”

So, I say that the sadly ineffective federal government must not interfere with the states' powers to provide protection and safety.

Buhari will agree that his kind of prayers and reinforcement security has been discouraging as security worsens and has not stopped the jihadist prayers from causing disability and insecurity in towns, schools, roads, churches, markets, farms, and forests. In fact, Buhari and his circle are recognizing that the federal government has lost control. No one is going to wait for the talk noise about moving the current police structure from the so-called exclusive list of the constitution to the concurrent list. The wait is over as the terrorists are not waiting and the governors are becoming realistic about their true roles.

Edo State governor, Obaseki, is now a model for other states on ways to plan and audit the regional forests, maintain partnerships with related participants, strengthen the security planning and adopt various measures to sustain security in the state, which include bush searching, registering of motorbikes and marketplaces, among other actions.

Zamfara state Gov. Bello Matawalle and Aminu Masari, Katsina State Governor, where the president comes from, have directed the issuing of gun licenses to citizens "to defend themselves" against armed terrorists continuously causing the deaths of thousands in the northern region. Rotimi Akeredolu, Ondo state governor, Benue State Governor Samuel Ortom as well as others has asked his people to defend themselves.

Like Obaseki noted, "the responsibility of any government in any society is to guarantee the security and safety of the people." "No government can call itself a government if it cannot protect and secure the lives of the people that it oversees." Any person or leader in Nigeria who disagrees with that on religious, ethnic, cynical, or emotional grounds needs to visit a psychologist for corrective mentality. Edo State is about to serve as a model on how to rid its region of banditry, kidnapping, and insurgency.

I will add that the work of law enforcement officials like forest police and border police under states should be seen not only as for security but as a social service of great importance to the environment and livelihood of the people, and the people should equally make sure that no threat to the life and safety of law enforcement officials exists, as the protection of each other results in the stability of a region. Time is going!