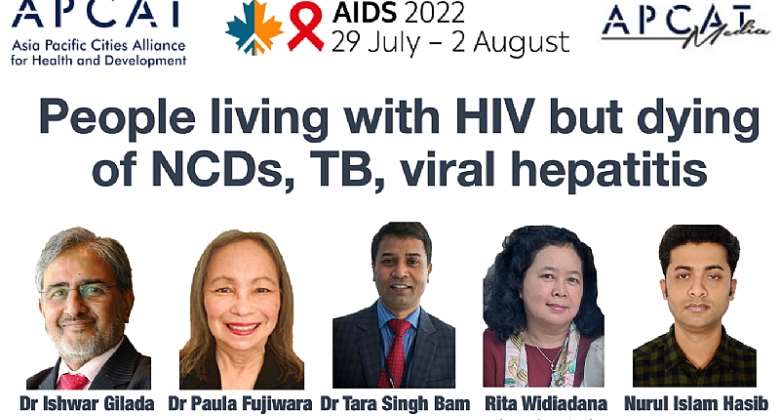 Over 28.7 million people living with HIV were receiving lifesaving antiretroviral therapy by end of 2021. While we push for efforts to ensure every person living with HIV is receiving full spectrum of HIV care and remains virally suppressed (so that undetectable equals untransmittable becomes a reality), we also have to safeguard against threats that can wither away gains made in fighting AIDS.

TB, despite being preventable and curable, continues to be the biggest cause of deaths of persons with HIV. With best of TB preventive therapy, diagnostics and treatments, no one should be dying of TB. Likewise, weight gain and other risk factors (like tobacco or alcohol use, unhealthy diet, lack of physical activity) may put people with HIV at risk of non-communicable diseases such as, heart diseases, stroke, cancers, diabetes, chronic respiratory diseases, among others. Similarly, hepatitis B and hepatitis C both are many times more infectious than HIV. These issues were in spotlight at a session held at 24thInternational AIDS Conference (AIDS 2022) co-hosted by Asia Pacific Cities Alliance for Health and Development (APCAT), CNS (Citizen News Service), and Asia Pacific Media Alliance for Health and Development (APCAT Media).

Collaborative activities between TB and HIV programmes have yielded positive public health results for the fight against both, TB and AIDS though we need to do a lot better as no one should be dying of TB or AIDS.

COVID-19 pandemic has shown what multi-sectoral response can look like (at global to local level) if political will heightens with a sense of purpose and urgency. Several COVID-19 vaccines were developed within a year, and rollout happened at an unprecedented scale in terms of doses administered and speed, though it was riddled with heart wrenching inequity too. Now, compare this with TB vaccine (Bacillus Calmette–Guérin - BCG) which is 101 years old now, remarked Rita Widiadana, senior journalist and former Editor of The Jakarta Post, who was moderating the session at 24th International AIDS Conference (AIDS 2022). That is why political will is so vital.

Dr Tara Singh Bam, Asia Pacific Director of International Union Against Tuberculosis and Lung Disease (The Union) said: “In global public health, on any issue, we may have science, technical capacity, plan, financial commitment, and a lot more, but what is often not there sufficiently are - local actions. Local actions are needed through local governance. Local governance for HIV prevention is needed through local legislation at city/state level. It builds accountability of Mayor, Governor and local leaders. Mayors are in best position to identify local solutions to address local problems. Local leadership is essential to make effective analysis of local problem, use of local resources, community participation, and public engagement. Thus, we need to work together to bring solutions that are relevant in local context under the leadership of Mayor, to make mayors accountable and ensure sustainability of the programme.”

“World Health Organization had endorsed dolutegravir as part of first-line antiretroviral therapy in 2018. It is a preferred antiretroviral medicine, for a range of reasons: it suppresses viral load very quickly, is well tolerated, shows fewer side effects and fewer drug-drug interactions, has a higher genetic barrier to developing drug resistance (as compared to efavirenz which it has replaced), and is required in small doses (making it easier for it to be combined into a user-friendly three-in-one antiretroviral pill). But several studies point out that dolutegravir-based antiretroviral regimens result in substantially higher weight gain as compared to other regimens. This can lead to increased risk of metabolic diseases such as NCDs in people living with HIV,” said Dr Ishwar Gilada, President of AIDS Society of India (ASI) and member of the Governing Council of International AIDS Society (IAS).

Dr Paula I Fujiwara, Chair of Stop TB Partnership Global Plan to End TB Task Force 2023-2030 shared highlights of the sixth plan made so far in the past almost two decades. “The Global Plan to End TB 2023-2030 is a costed advocacy plan for ending TB, which was developed collaboratively engaging people like national TB managers, TB affected communities, scientists, among others. Seven regional consultations in different parts of the world further informed the process of developing this Plan.” This is a living document for next eight years so that it remains fit-for-purpose and can ably guide us in efforts to end TB over next 100 months (by 2030).

This is the first Global Plan which builds upon One Health approach recognizing the intersection of human health, animal health and livestock, and environment.

“Lot of this investment will go into accelerating TB vaccine research and development. We are hoping to have at least one TB vaccine for widespread use by 2026,” said Dr Paula Fujiwara.

This strong and irrefutable economic case for fully funding the Global Plan to end TB builds upon a similar call by World Bank economics given 15 years ago. In 2007 World Bank economists made it clear that the economic benefits of TB control are greater than the costs: “most highly-affected countries could gain 9 times or more of their investment in TB control.”

This Plan aims to diagnose everyone in the world who has TB, and screen high risk, key and vulnerable populations (including those who are living with HIV) periodically. Compared to 2015 baseline TB incidence and death rates, this Global Plan aims for reducing TB incidence by 80% and 90% decline in TB deaths by 2030.

Political will, sense of urgency and purpose must drive #endTB efforts

Dr Paula Fujiwara pointed out that incidentally, G20 meetings happening from this year to next few years are in TB high burden nations: 2022 in Indonesia, 2023 in India and 2024 in Brazil. We all must make efforts to leverage this opportunity to mobilize G20 nations and other countries worldwide to fully support the implementation of the Global Plan.

Monkeypox is another grim reminder

Nurul Islam Hasib, senior Journalist of The Bangladesh Post and Secretary of the nation’s journalists’ union, said that “Monkeypox was there in Africa since 1970s” and caused thousands of deaths. “It was neglected and world ignored it. Finally it has turned up in rich nations too. We need global cooperation and solidarity for diseases and act upon it with equal sense of urgency and purpose.” It is commendable that smallpox vaccination is being offered to AIDS 2022 delegates or any other person who opts for it in Canada but Africa, where people have suffered avoidable human suffering due to monkeypox, is yet to get it. Stamping out inequity remains a vital cog-in-the-wheel to maximise public health and social justice impacts of development programmes implemented on the ground.

(Bobby Ramakant is part of editorial team of CNS (Citizen News Service) and a World Health Organization (WHO) Director General’s WNTD Awardee 2008. Follow him on Twitter @BobbyRamakant or visit www.bit.ly/BobbyRamakant)