Ghana Police To Arrest The Organisers Of The Arise Ghana Demo: A Case Of Oppressive Rule Or Rule Of Law? 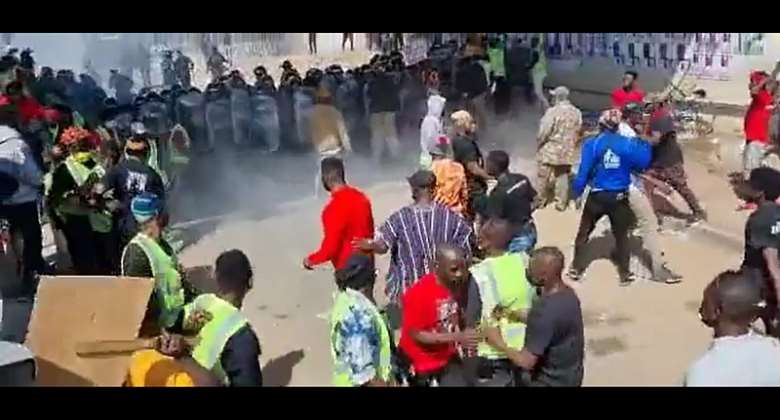 The attempt by the Ghana Police Service service to arrest the organisers of the Arise Ghana Demo is another oppressive tactic on the part of the government of President Nana Akufo Addo to intimidate, frustrate and cow Ghanaians into undue submission in the light of the worsening economic conditions in the country. Let me state that the days of culture of silence is over, and any attempt by government or its appendages to intimidate the opposition, especially, will have dire repercussions for government and indeed, the nation at large.

Let government of President Nana Akufo-Addo be told and told quite frankly that even under a military ruler (Rawlings) he, Nana Akufo-Addo, had the penchant of freedom to embark on series of countless demonstrations to protest against the then government over what he deemed to have been worsening economic conditions at the time. And he did, indeed, profit and gain popularity as a political force.

It is, therefore, no doubt that the political popularity of the then Nana Akufo-Addo emanated from such demonstrations in which he was the chief architect of them at all times. One of such demonstrations was the "kumi pre ku demo". Today, very shamefully, he, President Nana AKUFO-ADDO, gets restless and focusless when the news of the demonstration is broken to him. He has soon forgotten that demonstration is one of the freedoms of expressions guaranteed under the 1992 constitution and that the public is mandated to embark on demonstrations as and when the economic conditions confronting its citizens are nothing to write home about.

Today, as we speak, the worsening economic conditions and its related untold hardships on the ordinary Ghanaian is quite alarming and unbecoming of a nation. Within this year, fuel prices have more than quadrupled, fertiliser which was 100gh per bag, last year, is now 400gh, the cost of rent has accordingly skyrocketed because of the sharp increase in prices of cement, roofing sheets and iron rods. Landlords, in order to offset these costs, have increased rent beyond reasonable levels such that tenants are now the worst affected.

All these developments, the president and his appointees are death eared to them. Therefore, the Arise Ghana Demo is an attempt by the good citizens of this country, led by the opposition parties, to operationalize a constitutional provision of the 1992 as a protest against the worsening economic conditions all of us are engulfed in now.

Against this backdrop, any attempt by the police, through the manipulation of the government of Nana Akufo-Addo, to intimidate and frustrate the efforts of the organisers or suppress the voice of the voiceless, through arbitrary arrest, would be met with full force. To paraphrase our indefatigable National Communication Director, Sammy Gyamfi, the people's power is more than those in power.

And we shall employ every constitutionally guaranteed means to hold the corrupt and nepotistic family and friends' government of President Nana Akufo Addo accountable for its deeds, and indeed, to the good people of Ghana.