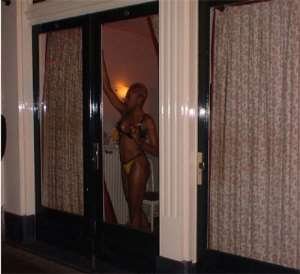 Almost every country in the world has some kind of 'prostitution'. Prostitution is practiced in countries such as Iran, Israel, Korea and the United States of America. Yet the oldest profession is legally banned in the aforementioned countries and may carry grave punishments.

The mere fact that a country is practicing prostitution does not provide grounds for Ghana to legalize the already clearly visible trade seen in major cities in the country.

However, we ought to face the reality and take action.

In simple terms, prostitution to my understanding is the offering of any sexual services in exchange for payment either in kind or cash.

Women in red-lights glass houses in The Netherlands, Belgium or Germany referred to as red-lights districts have braved all odds to fight for the legalization of the profession and it has paid off at least to an extent.

Who visits these brothels? Surprisingly it's the same critics who condemn the act. Almost every Ghanaian who visits The Netherlands (both VIPS and non-VIPS) add the heavy commercial district to their sight seeing attractions.

Only God knows the number of them who even go further!

Just pay a visit to the Amsterdam red-lights district and you will see groups of so-called weekend British tourists, Danes, Chinese, Arabs and many more jumping in happiness as if they have just been liberated from Rhode Island prisons paying hard-earned incomes for sex.

Prostitutes at the infamous red-lights districts are somewhat organized into recognizable groups such as the 'Rood Draad' translating as Red Rope. Through such organizations, the group is easily identified and provided the much needed advice and updates!.

They undergo periodic medical checks and even pay social premiums allowing them to benefit from welfare in times of need.

The presence of legalized prostitutions greatly reduces incidents of certain criminal acts such as rape, sexual intimidation and other vices. I am not saying pedophiles or rapists are entirely absent in The Netherlands but the incidence is appreciably low as compared to countries like USA, UK, Ghana etc.

Just browse through the 'crime and punishment' column of Ghanaweb.com and count the number of defilement cases in just a month.

Check HIV and AIDS figures in Ghana. The rates are not decreasing!

Morally and perhaps with our religion, Ghanaians may feel very reluctant to legalize prostitution.

It has never been our 'intended culture or way of life' but prostitution in Ghana has sadly been practiced for too long in the full glare of many!

Drive through some of the prominent areas in Accra (around the residences of the British High Commission) and you will see all kinds of prostitutes chasing men.

Advising the youth not to engage in sex is not an effective way of combating HIV or other STD's. After all people infected with the AIDS virus are also entitled to have sex if at least it will done safely!

You don't divorce your AIDS spouse!

Legalizing the trade does not necessary mean telling everyone to take it as a profession. The prostitutes are already out there awaiting the green light!

Maybe we can even give them a new name if legalized. ' Service Workers'.

I believe this is the message our authorities are signaling to have the trade legalized so that an effective strategy is adapted to meet matters of reality and not morality.

God bless Ghana Nana Osei Sankofa Television – The Netherlands Views expressed by the author(s) do not necessarily reflect those of GhanaHomePage.