#JusticeForSheila highlights the precarious lives of queer people in Kenya

By Awino Okech - The Conversation
Article 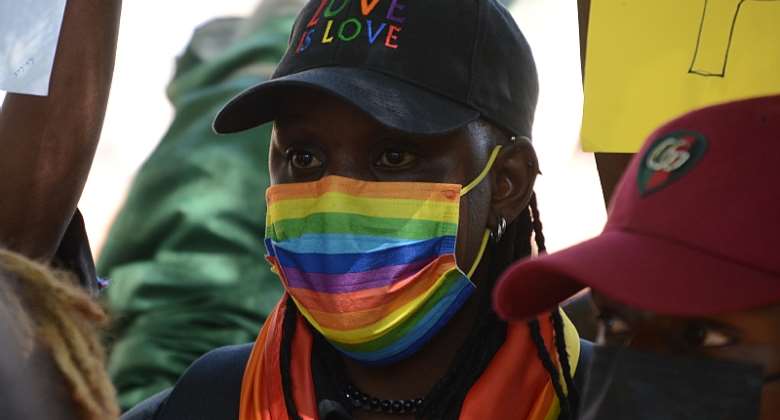 A Nairobi protest against homophobic statements made by a government minister. - Source: JOHN OCHIENG/SOPA Images/LightRocket via Getty Images

Kenya is one of 32 countries in Africa that criminalise homosexuality. People who identify as lesbian, gay, bisexual, transgender and intersex (LGBTI) are frequently stigmatised, shamed and assaulted. The hashtags calling for action against the murder of queer people – like the most recent #JusticeForSheila – continue to trend on social media. We asked gender studies professor Awino Okech to tell us about the state of homophobic violence against queer Kenyans – and what needs to be done about it.

Who is Sheila Lumumba and what is #JusticeForSheila?

Sheila Lumumba was a 25-year-old non-binary lesbian (they did not identify as either a woman or a man) who was found dead in Karatina, north of Nairobi, on 17 April 2022. Lumumba was reportedly raped and murdered in the most gruesome manner . #JusticeForSheila is a hashtag that mobilises public engagement on the murder of queer people in Kenya generally and calls for public accountability for Sheila's murder.

This hashtag is part of a history of social media organising in Kenya around the death of women, sex workers and queer people such as #JusticeforSharon , #JusticeforJoash and #Justiceforericachandra . Social media and Twitter in particular have become an important space for pursuing societal accountability in an environment where some lives are deemed disposable and receive limited attention in the justice system.

How prevalent are such attacks in Kenya?

In a hostile environment for queer people, documentation from civil society organisations only captures part of the story. The Gay and Lesbian Coalition of Kenya reports that “in Kenya, 53% of LGBTQ+ people are physically assaulted – that's every second person.” Anecdotal evidence from media reports points to a pattern of attacks that range from murder and sexual assault to other forms of physical attacks and threats. In 2021, at least three reports were captured in mainstream media that involved either murder or suspicious deaths.

Last year a transgender woman was murdered, and their body dumped on the streets in Nairobi. In the same year, a Ugandan refugee died from burn injuries associated with an attack on a group of queer refugees at Kakuma refugee camp and a peer educator with a queer organisation in Mombasa was found dead in his apartment. In 2020, a queer activist was found dead in her apartment under what were deemed suspicious circumstances.

Another key feature of homophobia against queer people in Kenya involves the persistent threat of homelessness if their sexual orientation is “discovered” by family or owners of rental property. It is important, that in reading about queer death and violence we recognise the class disaparities that shape how people experience homophobia and transphobia.

What are described as “anti-homophobic laws” are in fact relics from the colonial era in the Kenyan penal code. Indeed, the 2019 Repeal162 case in Kenya was a direct effort by queer organisations to challenge these provisions in the penal code. Section 162 and 165 of the Kenyan penal code criminalise what is referred to as “carnal knowledge against the order of nature”, which is often assumed to target same sex partners. The penalties range from 14 to 5 years imprisonment respectively.

These laws have since independence been used by the government to define African-ness and African culture in heterosexual and patriarchal terms thus justifying and cushioning violence.

What social forces drive the attacks?

The basis for attacks springs from two things. The first are ideas about how gender is governed in society. This is anchored in patriarchy, a system that distributes power between women and men, girls and boys unequally by privileging men and prescribing accompanying roles, behaviour and expected norms.

The second is the assumption that heterosexuality is the only way we can understand or experience sexuality. People who deviate from these societal prescriptions become targets of violence.

Read more: The Kenyan film director taking on the world -- with positive stories of black life

To understand transphobia and homophobia, we must return to how societies think about (or refuse to think about) gender and sexuality and the structures of power that benefit from this refusal. The logic that informs homophobia and transphobia is the same one that underpins femicide and violence against women.

For example, the murder of Sharon Otieno , a young university student, animated conversations about death and violence as justifiable actions against young women who go against the norm by engaging in sexual relationships with older men. The same logic was present in the 2013 case of Rachel Shebesh , a member of parliament, who was slapped in public by the then Nairobi governor for daring to pursue the rights of unpaid city council workers.

What can be done about the problem?

There are three possible ways to answer this. First, if you believe in the justice system as an effective mechanism to address injustice in societies, then strengthening the response of the legal and policing system to these attacks and deaths is one way to deal with the problem.

Two, for those who see legal and policing systems as fundamentally flawed because they punish rather than restore relations, the answer is to build movements that keep targeted communities safe.

Third, the long term, often difficult work of conscientising communities remains an important route to societal transformation and informs action one and two above.

Awino Okech does not work for, consult, own shares in or receive funding from any company or organization that would benefit from this article, and has disclosed no relevant affiliations beyond their academic appointment.

Hottest Photo Reports
Catch up with all the political quotes from our politicians.
Advertise here
More from Article
ModernGhana Links
How Africa can Achieve Food Sovereignty and Boycott Neo-Colonial Interests
Doing politics with the house of God: Some insights from political marketing
African Youth deserve better learning opportunities
TOP STORIES