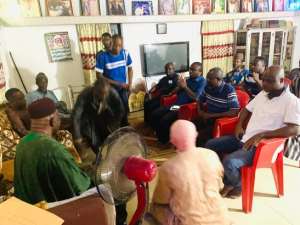 The Bono Regional Chief Imam, Alhaji Umar Abdul Kadir, has reacted to claims of his alleged partisan association with the Bono Regional Chairman of the New Patriotic Party (NPP), Kwame Baffoe Abronye, ahead of the NPP regional executive elections, maintaining that he has no alignment with him.

This comes after one of the regional chairman aspirants had allegedly suggested that Abronye had issues with the Regional Chief Imam, despite the fact that he even paid a courtesy visit to the Imam on the occasion of Eid-Ul-Fitr.

According to him, the office of Regional Chief Imam hinges on neutrality, devoid of partisan politics at all times irrespective of political membership or association.

“The Office of the Regional Chief Imam has noted with grave concern, some scrupulous individuals and persons who, for their own political and parochial interests, are dragging the name of the Regional Chief Imam and that of the office into the New Patriotic Party’s (NPP) regional executive elections just to score cheap political points, and advantage over opponents,” part of the statement read.

Alhaji Abdallah Quandah further explained that the office of the Chief Imam cannot be used to play any political game, stressing that “the office exists for all and the collective wellbeing of society”.

“Let it be put on record that the Regional Chief Imam’s office is, first of all, a religious one, and hence apolitical. Religion is the embodiment of all the different people in society. Politics, on the other hand, is, unfortunately, the pitching of one side of society against the other,” he said.

It added: “The Office of the Regional Chief Imam exists for all and the good of society. Hence, it is absurd to note that the reputation of the office, and the Chief Imam in particular, is used to play a political game of that nature”.

To this end, Alhaji Abdallah Quandah stated categorically that both the Office and the Chief Imam are not on the side of any of the aspirants for the NPP regional chairmanship position.

He therefore called on well-meaning people in the region and the general public to discard anything contrary that is heard on various social media, traditional and other platforms.

The attempt, he said, is pure mischief and a propaganda tool employed by individuals to enhance their political fortunes, insisting that politics is a game of policy and ideas.

“Whoever that communicates clearly their policies would definitely win the favour of delegates. The Chief Imam treats all persons as equal, and would not prefer one over the other for any reason (s). The Office and the Chief Imam is, therefore, appealing to persons who are trying to drag the reputation of the Chief Imam and his noble office into their political game to kindly desist from such acts,” Alhaji Abdallah Quandah cautioned.

Hottest Photo Reports
Catch up with all the political quotes from our politicians.
Advertise here
More from Politics
ModernGhana Links
As an MP I've performed better than entire Akufo-Addo government in healthcare delivery in Tamale North — Suhuyini
Arise Ghana demo: We’re gathering footage to sue police – Joshua Akamba
Weeping may endure under Akufo-Addo but joy will come after the next election – Sam George
TOP STORIES