Has the Ashanti’s historic Golden Stool (Sikadwa) lost its relevance? 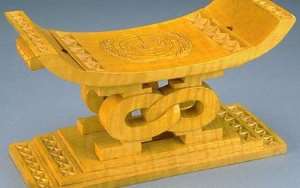 The Golden Stool (Sikadwa) is historically renowned for its capability of uniting the Ashantis as one people with a common destiny. This is especially so when it comes to uniting the various chiefdoms within Ashanti region.

It is highly respected for being a symbol of unity, ably cohesively to bring all the chiefs and their subjects in Asanteman together. The Golden Stool is revered for its intrinsic characteristic of uniting and holding together all the chiefdoms and subjects in Asanteman, formerly the Asante Confederacy or Asante Kingdom. By this, we believe and trust it to dispense justice but not injustice, or else, it loses its relevance and inherent ability to hold the chiefdoms together.

However, a recent shocking development comes to raise doubts in the minds of many a discerning Ashanti or subject of Asanteman, about the long held belief of the Golden Stool serving honestly as a symbol of unity, treating each one fairly and truthfully.

Asantehene Otumfuo Osei Tutu II has committed what may be considered a disgusting blunder, if not surely an intentional act, to deprive some true royals of their birthright. However, when his decision was challenged by a person he least expected to point out his crafty ploy to him, having been caught off guard, he, Otumfuo Osei Tutu II, sought an escape route via the Golden Stool.

The whole incident is alleged to have unfolded as following.

Otumfuo Osei Tutu II in November 2012, at his Manhyia palace, pronounced his verdict on a long chieftaincy dispute involving two royal families in Essumeja. The dispute was about who was eligible to ascend the Essumeja stool following the demise of their paramount chief, Odeneho Oduro Numapau.

In his verdict declaration, Otumfuo directed the Aduana family head (Aduana abusuapanin) of Essumeja to proceed home to nominate from potential claimants a royal to be installed as the successor chief to the late Odeneho Oduro Numapau. Further to his directives, the Abusuapani should do as requested in consultation with the female head of the Aduana royal family, Obaapanin Nana Adwoa Aborah.

During the hearing on the chieftaincy dispute, credible historical facts and narratives were adduced to convincingly prove that really, the antecessors and descendants of Obaapanin Nana Adwoa Aborah are the true royals of Essumeja hence Otumfuo ruling in her family’s favour.

The Ghana Chronicle newspaper in its edition of 26 November 2012 published thus, “THE END of the Essumeja Chieftaincy dispute is in sight as Otumfuo Osei Tutu II, the Asantehene, has directed the Abusuapanin (head of Aduana Royal family) of Essumeja to immediately nominate a royal for installation as chief. The nomination is to be done in consultation with the Obaapanin of the family, Nana Adwoa Aborah in order to choose from among potential claimants within a week.

Otumfuo gave the directive last Thursday, when the Asanteman Council met to determine the dispute bordering on the eligibility of the Queen mother of Essumeja, Nana Adwoa Obro Pokuaa Nyankronpon and a royal of Aduana family, Madam Adwoa Abora”

Nevertheless, this same Otumfuo Osei Tutu II has today turned around to say there is no any royal, or true royal family, in Essumeja. Therefore, the Essumeja stool belongs to him, and him only. Subsequently, he can give it to whomever he pleases, he says.

He made the above declaration following the townsfolk silent opposition to him for selecting, and ensuring the enstoolment of, one Mr George Yaw Okyere Ntramah, as the paramount chief of Essumeja.

The said person he has forced on Essumeja as their paramount chief is a complete outsider, unknown to the royal family, as far as the eligibility for ascension to the throne goes, a reliable source reveals.

By tradition, that person is nowhere near the royal family, so he cannot, and should not, under any circumstance, be enthroned as the paramount chief (Omanhene) of Essumeja.

Essumeja is the head of the left wing stools of Asanteman.

Dr Yaw Sarfo, the self-styled Kumawuhene Barima Tweneboa Kodua, in the meeting conveyed to the attention of Otumfuo Osei Tutu II that Nana Adwoa Aborah is his (Dr Yaw Sarfo’s) sister. Therefore, she is a true Aduana royal of Essumeja whose family has been ruling with her own mother once the queen of Essumeja.

Otumfuo Osei Tutu II caught off guard by Dr Yaw Sarfo’s statement and with his head hanging in shame, is alleged to have said, “Sikadwa appeared to me in my dream. It mentioned exactly the name George Yaw Okyere Ntramah, his mother’s name, the house and family he comes from, the work he does, and ordered me to give the Essumeja stool to him”. I was directed by Sikadwa to select the person I have, as described above. Therefore, there was nothing I could do, whether or not the person is a royal, but to follow the directives given to me by Sikadwa”

Dr Yaw Sarfo is the person Otumfuo has illegally imposed on Kumawu as their paramount chief but being challenged by the likes of Rockson Adofo. Otumfuo has absolutely no right of say in the nomination, selection and enstoolment of a royal candidate as Kumawuhene, let alone, impose one on Kumawu as he has done, using brute force aided by government machinery.

I find his submission in defence of installing an outsider as the paramount chief of Essumeja completely uncustomary and untraditional, if not false. He has not the conventional right to appoint who becomes the chief of Essumeja, but the Essumeja royal family head in consultation with their Obaapanin. It is the sole prerogative of the Aduana family head and the queen and the Obaapanin of Essumeja.

How could Sikadwa do something that is contrary to what it stands for – unity in truth? How can Sikadwa remove the originators of a stool from it, when they have done nothing untoward to warrant their removal, to give the throne to a complete stranger? This does not make sense to any intelligent, honest and serious person except fools and sycophants.

By Otumfuo’s submission, we can say without fear that if that is how Sikadwa has decided to behave, irresponsibly of course, then it is not worth anyone’s time and efforts to venerate it any longer.

I know from my heart of hearts that Sikadwa has not directed Otumfuo as he alleges but out of his own self-serving behaviour, overflowing with corruption, insatiable greed, bullying and taking others for fools, he decided to give the Essumeja stool to that stranger.

I understand the person is rich. He is the Managing Director of both Anglogold West Africa and Newmont Ghana. It is alleged he was recommended to Otumfuo for enstoolment by Mr Samuel Esson Jonah, popularly known as Sam Jonah, Otumfuo’s best super rich friend.

How I hope Otumfuo had not taken some huge sum of money from him prior to offering the stool to him.

The truth will surely out as long as God remains Omnipotent, Omniscient and Omnipresent.

Why are the Asanteman chiefs always mute when Otumfuo Osei Tutu II does things tailored toward rewriting the Ashanti history to suit his selfish parochial greedy and corrupt interests?

If they will not talk to correct him, the proud and fearless son of Kumawu/Asiampa soil, Rockson Adofo, shall.

Otumfuo must come again as his offered reason does not make sense one bit. It is completely deceptive. It denigrates Sikadwa.

Before Kumasi or Asanteman came to be, Essumeja was, and it has had royals ruling the town.

Why was Essumeja called Asantemanso? Was it not the place from whence came the Asantes from a hole in the ground? Does not a forest still exist in Essumeja to precise exactly where Asantemanso is?

Therefore, for Otumfuo Osei Tutu II to claim that Essumeja belongs to him and that the town or the division has never had any true royals is just the figment of his warped imagination.