John Mahama: A Servant-Leader And Not A Ruler Like Akufo-Addo 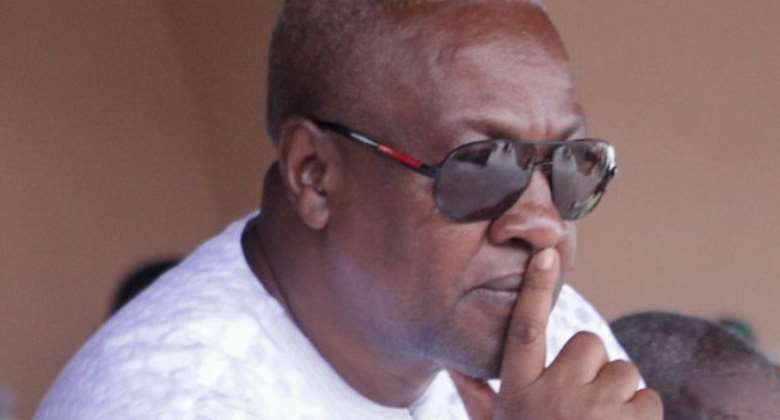 Beyond the politics of everything, John Mahama is a great leader who served his people with integrity, honesty and selflessly. Reading from Kenneth Hartley Blanchard’s “Servant Leader”, I could see and feel President John Mahama in his profound quote…”Servant leadership is all about making the goals clear and then rolling your sleeves up and doing whatever it takes to help people win. In that situation, they don’t work for you, you work for them.”

This was a President who narrowed his leadership from his humble beginning into the reality of the Ghanaian situation. He served and not ruled with a sense of entitlement like Akuffo-Addo is doing now. We were told that Akuffo-Addo was raised from the castle; so he lived like a lad born into the royal family of the United Kingdom, and waiting to be crown a Prince. Without knowing, the ascension of President Akuffo-Addo to the Presidency of Ghana was like installing a King who was waiting as a Prince for decades.

Any wonder, he has this sense of entitlement; a feeling that he was born to rule, just like how it was summarized by Daddy Lumba in the campaign song for Nana Addo in 2008-thus “Nana is born to succeed; he was born to win”. So, when Ursula Owusu made the point that “Ye Gye Ya Mae”, she literally meant that the crown Prince had finally taken his crown and ready to rule with an iron fist.

A servant-leader like John Mahama comes with a vision. A vision that will impact in unborn generations. That is why his industrialization vision propelled him to invest in building more energy plants with higher capacity to stand any future industrialization drive of Ghana. A vision, Nana Addo and his NPP have run down and trying as usual of them to cajole the Ghanaian that the “excess power” is needless. So, you ask yourself, if the 1D 1F were a reality, wouldn’t the so called excess capacity be a sound footing for an effective takeoff?

Indeed, a servant-leader takes responsibility for things he knows nothing about and things he didn’t even contemplate. He takes the blame and stay put in fixing the challenges ahead. At the height of the crippling energy crisis in 2014, President Mahama took responsibility for this revolving crisis which had been managed over the years without a one-off solution.

Mind you, energy crisis (dumsor) hit Ghana in 1983, 1998 and 2006/07. Due to the fact that generation capacity of the existing power plants by 2014 went below the national peak power demand of 2200MW, we were visited by this revolving crisis. President John Mahama didn’t blame his predecessors (ie President Rawlings and President Kuffour) but took responsibility for this visiting crisis. He had this to say at the 2014 SONA…”In the past, what we have done has been to manage ourselves out of the situation. I do not intend to manage the situation as has been done in the past. I intend to fix it! I owe it to the Ghanaian people. I, John Dramani Mahama, will fix this energy challenge.” This is a servant-leader and not a ruler who cannot be blamed even for his own mess. Has Nana Addo ever taken responsibility for anything? In effect, Nana Addo is a ruler and not a leader!

A servant-leader like John Mahama listens and respect opinions of the masses and not to assume the repository of knowledge and call the bluff of genuine dissent. When the issue of the bus branding hit the waves, President John Mahama was blamed and vilified for an administrative decision made by a subordinate. When Ghanaians cried, he listened by stepping in immediately with an enquiry. The said Minister resigned even before the findings of the investigation were made public. Monies were refunded and an apology rendered. Same as the issues about the 2014 FIFA World Cup.

Can anybody show me one instance when Akuffo-Addo ever shook a flesh in admission that what has happened is wrong, and that he has heard our voices and ready to work to reverse it? Is it PDS he didn’t defend or it is the hiring of private jet he didn’t call the bluff of Ghanaians over. At a point, President Akuffo-Addo went as far as calling his critics names and making it sound like Ghanaians complain too much. He even went as far as attacking Civil Society Organizations for calling him out at a point. This is not a listening President, and of course not a President who can accommodate dissent and admit genuine concerns. Even when majority of Ghanaians stood against his penchant of renting a private jet at the expense of the taxpayer and at a time we are told that there is no money to even on greater salaries of public sector workers by more than 4%, President Akufo-Addo will neither listen nor respect the concerns of the masses.

If President Mahama were intolerant to a quarter of Akuffo-Addo’s, like the likes of Mananseh will be in jail by now; like Joy FM and Citi FM would be shut down, and like Kennedy Agyapong’s Oman and Net 2 TV and their presenters will be candidates for exile. Did you watch the body language of Akuffo-Adoo when he replied the Afloa Chief in that unfortunate interview with Peace FM? Did you watch his body language in the just past BBC interview? He feels like you can’t ask me that question. The level of President Mahama’s tolerance of his opponents and needless critics is partly to blame for his defeat in 2016. Who would have thought that after that shameless work of Manansseh on the so called Ford bribery scandal, which was aired on the day President Mahama’s mother passed on, he (Manansseh) could have the guts to walk freely to President Mahama’s office to sell his book to him? Can he walk to the Flad Staff house after the militia documentary?

Indeed, a servant-leader build bridges and unite the people even in the midst of the storm. Here was a man whose legitimacy was questioned in a useless 8 months election petition. Nana Addo and his NPP then swore to smear his legitimacy, make the country ungovernable, attack his personality and do everything to create a demon out of him in the eye of the Ghanaian people. In the midst of this, President Mahama’s public speeches, his demeanor, his approach to issues, all point to the fact that he wanted to lead a United country irrespective of our political differences.

Fast forward into the current regime, President Akuffo-Addo in most of his public speeches either mock the opposition, call them names and as usual, engage in pure divide-and-rule tactics. Imagine the President addressing young SHS students, and his admonishing to them is that, they should pass to shame his (Akuffo-Addo’s) critics. Not that they should learn, pass and become the light of the world and Ghana in particular. The least opportunity he gets, he divides the country either along political lines or ethnic lines. On some occasions, he tried to fuel religious sentiments in an already polarized religious atmosphere. Does is look like he’s a leader who mean well for Ghana?

Joseph Yamin to clear weeds in all abandoned Mahama projects...
4 minutes ago