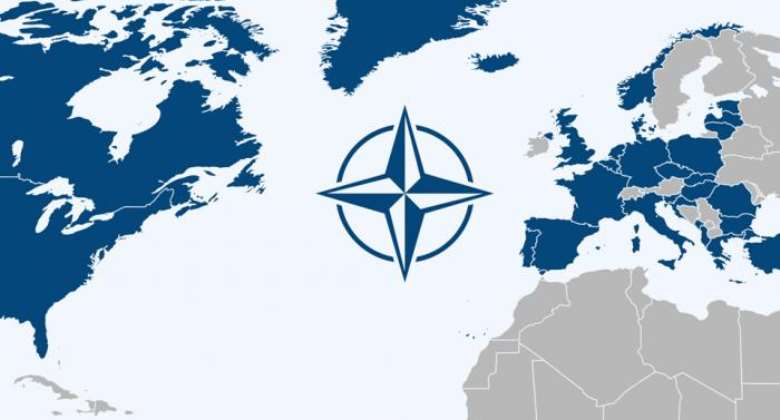 NATO which stands for North Treaty Trading Organisation established in 1946 after World War 2 to reintegrate global economy and scientific industrialisation which got setbacks as a result of the devastation cause by WW2, especially in Europe. Both WW1 and WW2 arise as a result of a hasty decisions taking by the power blocks or alliances. In the case of WW1 which started between Austro-Hungarian and Bosnia-Serb after Austro-Hungarian accused Bosnia-Serb of assassinating their heir in the persons of Archduke Franz Ferdinad and as result declare War on the Serbs. Prior to the WW1 there were two powerful blocks namely the Triple Entente which comprises of Russia, Britain and France and the other block known to be Triple Alliances comprises of Germany, Austro-Hungarian, and Italy. Russia who happens to be in one of the blocks came to the aid of the Serbs to fight Austro-Hungarian who happens to be member of the other block therefore forcing Germany to also declare their support to Austro-Hungarian, subsequently these actions rope in the remaining continent/ countries into the War as result of the block each country sympathise with. WW1 recorded casualties both military and civilians 9 million and 5 million respectively.

Similarly, WW2 had the same pattern to that of the WW1 after Germany invaded Poland under the Nazis Regime led by Adolf Hitler. Germany was part of the Axis Alliances, on the other hand France and Great Britain who happens to be part of the Western Alliances came to the aid of Poland. This response from the Western Alliances led to clashes between the two blocks and further spread to the rest of the world as a result of block a country allied herself with. WW2 was more devastated than that of the WW1, the war recorded about 85 million casualties, and this resulted a greater setback in area of economic and scientific advancement. These two wars drew Europe backwards as a powerful continent and therefore the need to come out with a standardised military blocks apart from the various intergovernmental organisations such as the UN, European Union, African Union and the rest of the unions to prevent countries from having appetite of invading another sovereign country since the New block (NATO) would be more inclusive than the initial blocks form prior to WW1 and WW2. Countries within Eastern Europe led by Russia attempted to establish a rivalry military block in 1955 that is Warsaw Treaty, but this block could not survive after East Germany merge with west Germany to become Republic of Germany and later on joint NATO which has its membership beyond the boundaries of Europe, which comprises America and Canada. The establishment of NATO as a standardised military blocks has ensured a measurable amount of peace within the globe specially within Europe which happens to be prone War continent, though Russia attempted once again uniting Eastern Europe through the establishment of Soviet Union which could not survive because of lack of well establish structures and the ambitions of Russia to rely on this block to become most powerful country across the globe.

NATO which was establish just aftermath of WW2 has 30 country members and per the organisation Treaty Article 5 attacking any member country means attacking the rest of the members and the organisation has a modality of coming to a country's aid, specially countries that are not being part of NATO even though in the past NATO had intervene in non-member countries like Libya civil war but a conclusive decision had to reach before any action is taking.

The question I seek to sort in this article of mine is, are those asking for NATO to intervene in Russia-Ukraine war by calling for no flight zone within Ukraine air space or territory justifiable since most of them argued similar interventions were done in certain battles example Afghanistan, Libya, Syria etc

The Russia-Ukraine war has seen a lot of calls from countries and some leaders for NATO To intervene by declaring Ukraine territory or air space as no-fly zone which means Russia Air flight can be gun down since most of the Russian attacks is launched through the air space in order to mitigate the death being recorded specially on part of Ukrainian innocent children and women. NATO has rather opted economy sanctions as a measure in compiling Russian oligarchy or billionaire and their citizens to force their president in the persons of Vladimir Putin to cease fire and rather go for diplomatic ways of settling their differences. The second stands taking by NATO which is led by America is the best measure considering the geopolitical nature of the globe in an event NATO led by America declares Ukraine territory as no flight zone area it would trigger other non-American Allied countries particular China and North Korean to poke their nose into the war which eventually might have a dire consequence to the peace of the world.

NATO through its 30 member states and their Allied specially within Eastern European countries like Finland and Czech Republic together with other continent must continue to distance themselves from having any international relations with Russia as a country and these measures would compile Russia through her leadership Putin to go for other options to ensure world peace. Other non-military blocks such as the UN which has 193 members of which Russia happens to be part had also taken some Stance of distancing itself from Russian and this was seen on 4th March 2022 in one of their diplomatic foreign meetings when it got the turn for Russian Foreign ministers to give a speech the entire reps within the conference hall walk out.

Akufo-Addo going to IMF is not victory, it's a day of sadnes...
17 minutes ago