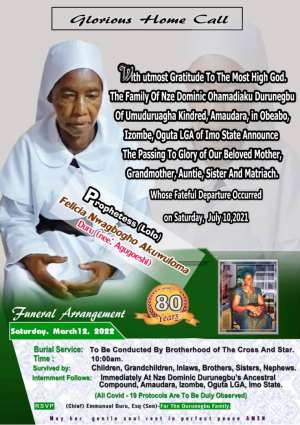 Mother of famous Communications Strategist and Chairman, Freedom of Information Coalition in Nigeria, Dr. Walter Duru is no more. She was aged 80.

According to an announcement, signed by the first son of the family, Chief Emmanuel Duru and made available to newsmen, the late Mrs. Felicia Duru will be buried on Saturday, March 12, 2022 at her family compound in Umuduruagha, Amaudara, Obeabo Autonomous Community in Izombe, Oguta Local Government Area of Imo State.

The announcement reads in part: “It is with deep sense of sorrow, but with submission to the will of God that I write to notify you of the death of our dearly beloved mother, Senior Prophetess (Lolo) Felicia Agboghomma Duru (Nee Agugoeshi) at the age of 80.”

“Lolo Felicia was the Matriarch of the Nze Durunegbu Dynasty of Umuduruagha, Amaudara, Obeabo, Izombe, in Oguta Local Government Area of Imo State, and until her departure, was also the mother-confessor, counsellor, rallying point and fulcrum of women from all walks of life across the length and breadth of our Izombe clan; and beyond. She was a devout Christian, loving, caring mother and a lover of peace.”

“Her burial is slated for Saturday, March 12, 2022 in her family compound, Nze Dominic Duru’s compound, Amaudara in Obeabo autonomous community, Izombe, Oguta Local Government Area, Imo State. Our family will be honoured by your esteemed presence at the funeral.”

The late Lolo Felicia Duru is survived by many children and grand children.

Franklin Cudjoe back calls for probe into Covid-19 expenditu...
25 minutes ago

North East: One killed in clash between two communities
25 minutes ago