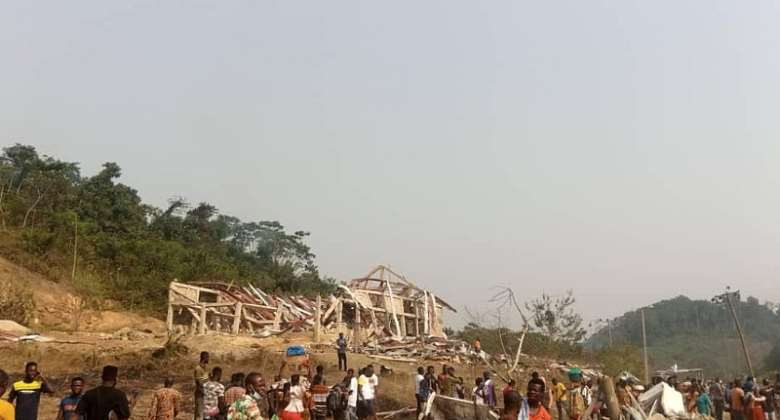 The National Disaster Management Organisation, NADMO has said about 95% of the over 200 households at Bogoso-Appiate in the Western Region have been demolished by the 'huge' explosion that occurred on Thursday.

Speaking on the Citi Breakfast Show on Friday, the Deputy NADMO Director for Prestea Huni- Valley, Louis Afful, explained that the explosion happened in two phases, one underground and then the top, affecting residents in the process.

“The opposite side of the road has a few structures, including a church building and a school. The impact of the explosion was so great such that it threw off a transformer. The truck itself cannot be found.”

He further indicated that the impact was quite severe as most of the houses in the area are made of mud.

“Most of the houses in the area are made of mud. These houses were first swept away as they are in front. The block houses were situated at the back, and even for those, there are only 4 of them, including a 6-unit classroom block left.”

“In my estimation, about 95% out of the about 200 households were swept away.”

So far, 17 people have been confirmed dead, while 59 injured persons have been rescued in the deadly explosion as authorities mobilise rescue efforts.

The government in a statement from the Information Ministry, noted that out of the 59 injured persons, 42 are receiving treatment and some are in critical condition.

It thus outlined some measures taken so far by the government to handle the situation.

Preliminary investigations by the police said a vehicle transporting explosives to a mining site collided with a motorcycle, resulting in the explosion.

Meanwhile, Chirano Gold Mines has confirmed that the truck that was involved in the explosion was destined for its site.

To forestall a secondary explosion, government has deployed a joint team of police and military explosion experts to examine the situation and put in place the requisite measures.