By Ananpansah B. Abraham
Agriculture 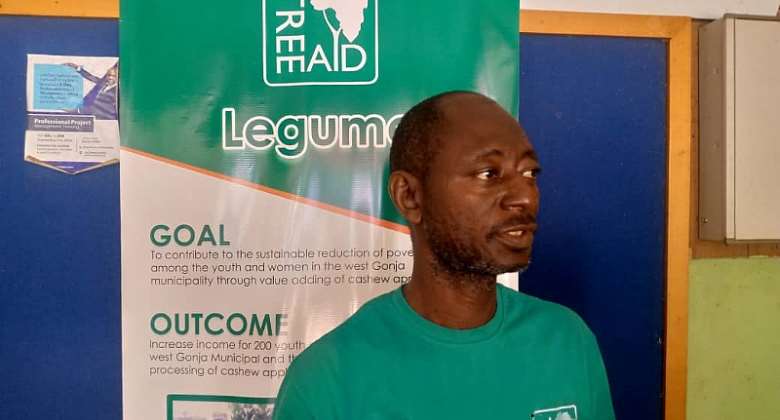 The President of the West Gonja Chapter of the Cooperative Cashew Farmers and Marketing Union, Iddrisu Sumani Azambuja, is accusing some allied middlemen in the cashew value chain of conspiring to exploit cashew farmers in the West Gonja Municipal of the Savannah Region.

This he said was barefaced in the low prices the middlemen hide behind the value chain to offer cashew farmers in the municipality for their many years of toil.

In an engagement with the media, Mr Azambuja said it is regrettably that cashew farmers in the municipality were currently being paid as low as Ghc2 to Ghc3 per kilo of raw cashew nuts against the Ghc5 minimum price set by the Agric Minister somewhere in December, 2021.

"Friends from the media, it is disgusting to point out that cashew farmers in our municipality after toiling many years to take care of the tree crops are offered between Ghc2 and Ghc3 per kilo of raw cashew nuts purchased and same is sold to exporters at a rate above Ghc7 per kilo.

"It can be recalled that in December 2021, the Minister of Food and Agriculture, Dr. Owusu Afriyie Akoto announced the minimum price of raw cashew nuts to be Ghc5 per kilo and cautioned all buyers not to offer any price below the minimum price at farm gates across all cashew growing areas in Ghana," he said.

He said the cashew farmers are compelled by pressing social needs to sell the raw cashew nuts to the allied middlemen at any price offered, a situation which he believed was discouraging many farmers and especially, the youth from venturing into cashew farming in the municipality.

Mr. Azambuja called for unity and a collaborative effort among cashew farmers under one umbrella to foster a stronger voice and increase bargaining power through the cashew union for a guaranteed price.

The cashew advocate disclosed that there was the need for the over 3,000 existing cashew farmers in the municipality to adopt and discuss the Cashew Pricing Notification System developed by TreeAid Ghana for cashew farmers, buyers and processors to transact a win-win cashew business.

This, he said will enable cashew farmers to directly enter contracts for competitive cashew prices for members. He also hinted at plans to go into future processing of cashew into fruit juice, jams and cashew kernels for domestic market consumption in northern Ghana.

While calling for stakeholder support to reverse the current trend, he launched a passionate appeal to the Regional and Municipal Agric Directorates to help build the capacity of cashew farmers in the union, especially in the areas of pricing and marketing.

He disclosed that henceforth, legal actions would be taken against any middlemen who will attempt to exploit cashew farmers through the backdoor and non-cooperative members sanctioned accordingly.

Prepare for hunger in Ghana — GAWU warn Ghanaians
37 minutes ago