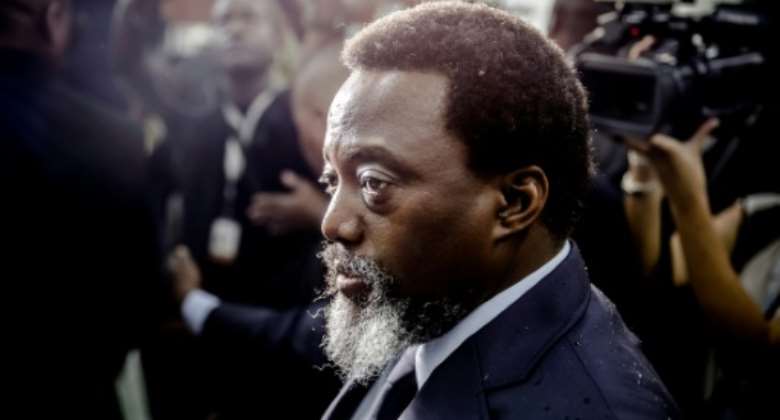 Civilian plaintiffs in the case and 50 NGOs had asked the court to have former DR Congo president Joseph Kabila (pictured December 2018) testify at a trial into the murder of a rights campaigner. By Luis TATO (AFP/File)

A military court in DR Congo on Wednesday rejected a bid to have former president Joseph Kabila testify at a trial into the murder of a prominent rights campaigner.

Three policemen are appealing against a death sentence over the killing of activist Floribert Chebeya in 2010 -- a case that stoked international concern over rights abuses during the Kabila era.

Civilian plaintiffs in the case and 50 NGOs had asked the court to have Kabila and several other figures give evidence, but the request was turned down.

"We are very disappointed by this position," Rostin Manketa, executive director of Chebeya's campaign group, Voice for the Voiceless (VSV).

Until now, "the court was heading in the right direction (but) this poorly reasoned decision... makes us realise that they want to keep grey areas," he said.

Chebeya was found dead in his car on the outskirts of the capital Kinshasa in June 2010.

He had been called to the police station the previous day -- his driver took him there for the appointment but subsequently went missing and is suspected to have been killed.

Five policemen were later convicted of Chebeya's death. Three were sentenced in absentia and are appealing.

Military prosecutors recently said they now suspect that the country's former head of police, General John Numbi, also played a part in the killing. He has disappeared.

Numbi was placed under US and European sanctions in 2016 for a crackdown on protests in the Bas Congo region in 2008 that according to Human Rights Watch (HRW) claimed more than 200 lives.

But in 2017, he was given an award by Kabila, a move that incensed campaign groups.

The following year, Numbi was appointed armed forces inspector general, but Kabila's successor, Felix Tshisekedi, forced him out in July 2020.

Kabila stepped down in January 2019 after 18 years in power, in the first peaceful transition in the history of the Democratic Republic of Congo.