NEC Chair Must Resign or Be Dismissed by the President 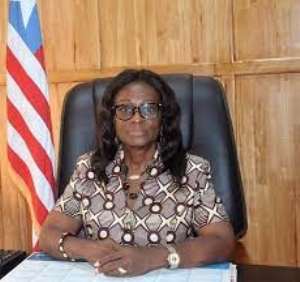 Since December 15, 2021, when the Liberia Anti-Corruption Commission (LACC) charged and subsequently forwarded to court for prosecution the Chairman of the National Elections Commission (NEC), Davidetta Browne-Lansanah, and her alleged accomplices for an alleged act of malfeasance, Mrs. Browne-Lansanah, remains uncompromising in challenging the allegation. She and her alleged NEC collaborators say the LACC’s accusation is untrue.

The Commission recently indicted her for conflict of interest after she reportedly admitted to presiding over an NEC’s bidding process that fraudulently awarded a contract to a Liberian business, Tuma Enterprise Incorporated. The monetary value of the contract is more than 182 thousand US dollars; and the company allegedly has a family tie to her. According to the LACC, Mrs. Browne-Lansanah and the company’s Vice President for Operations, David Browne are paternal half-siblings while Mr. Arnold Badio, owner, and incorporator of the company, is Mr. Browne’s maternal half-brother.

In an indictment, the LACC said the Chairperson is being prosecuted for violating Section 1.3.6, of the National Code of Conduct, which speaks against conflict of interest. In addition, she allegedly transgressed Part II, Section 2.2 of the LACC Act and section 15.3 of the Money laundering Act of 2012 while awarding a contract for the lease of 20 facial recognition thermometers at the total cost of US$182,320. The NEC reportedly used the thermometers to monitor access and attendance for safe and efficient access control of personnel during the conduct of the November 2021 by elections held in Nimba, Bong, Grand Gedeh, and Bomi counties. The corruption case at the NEC was initially uncovered by the independent Daily Observer Newspaper in the latter part of 2021.

However, Chairman Borwne-Lansanah in a counter argument described as frivolous the LACC’s report, which accused her and some NEC executives of admitting to engaging in acts of corruption during a recent probe conducted by the Commission. Then she reported, “Following its investigation, the LACC told the public that it has completed its investigation and read out an outcome claiming we had made certain admissions of guilt during our appearance before the LACC”. She furthered, “This is false and misleading. We appeared before the LACC with our legal counsels, submitted the requested documents along with written statements. At no time during the interviews did any of us ever make any admission of guilt as falsely stated during the December 15 LACC press conference.”

In the wake of the LACC’s lawsuit, the embattled and troubled Chairman at a news conference held in Monrovia on December 31, 2021, amazed Liberians, and the international community when she accused NEC Commissioner Floyd Sayor for illegally inserting more than 2.8 million US dollars in the Commission’s 2022/2023 budget unknown to her and other NEC commissioners.

According to her, Commissioner Sayor reportedly inserted the money in the budget for the purchase of live monitoring and tracking systems, vehicles, motorbikes, and canoes that maybe needed for the transportation of election materials during the 2023 general and presidential elections. Also, the money was to be used for the compensation of casual laborers. However, Commissioner Sayor has since refuted the allegation.

Distractions and Loss of Public Trust

Davidetta and her alleged collaborators are exerting all legal means to overturn the antigraft Commission’s allegations, but the damage has already been done. The lawsuit and her recent allegation made against Commissioner Sayor for allegedly inserting more than 2.8 million US dollars in the NEC 2022/2023 budget unknown to her and other commissioners are serious embarrassment and distractions for her and the NEC. Moreover, the negative publicity associated with the current situation has stained the image and integrity of the electoral body. Furthermore, it has eroded the people’s trust and confidence reposed in the Commission.

As an integrity institution, the NEC cannot afford to be associated with issues of distrust and corruption. Simply put, the NEC must remain above the fray, but the prevailing Internal rift between Mrs. Browne-Lansanah and Commissioner Say or coupled with the LACC’s criminal charges against her and some executives of the NEC have put a dent in the reputation of the Commission. The Commission has literally lost its moral standing amongst Liberians and the peoples of the world.

Resign or be Dismissed

The NEC is the gateway to a democratic, peaceful, and stable Liberia. At a critical period like this when Liberians are preparing for the most talked about 2023 general and presidential elections, the reported leadership and dishonesty crisis at the NEC is undesirable. Chairman Browne-Lansanah has lost the ground for leading such a critical institution. She must demonstrate leadership by publicly accepting some of the reported administrative lapses at the Commission. Additionally, she must help in protecting the credibility of the Commission by honorably resigning her position with immediate effect. Yes, Davidetta and her alleged collaborators have failed Liberia miserably; and she must muster the courage to go in peace.

The conflict of interest and money laundering charges levied against her are serious offenses that have called into question her hard-earned reputation and that of the NEC. While most Liberians including this author do acknowledge that over the years, she worked very hard in the execution of the NEC’s duties and responsibilities, it is however, important that she quits her position now because the current legal battle between her and the LACC is doing more harm to the credibility of the electoral body than good. No amount of grandstanding will help her and the NEC in the ongoing crisis because a crime was allegedly committed.

Additionally, her recent dishonesty claim made against Commissioner Sayor for allegedly inserting more than 2.8 million US dollars in the NEC 2022/2023 budget without her knowledge and that of the other NEC commissioners is not helpful for her as a leader. Making such claim now when the 2022/2023 national budget, which includes allocations for the NEC is before the National Legislature for debate and passage into law, speaks volumes about Chairman Browne-Lansanah’s leadership inadequacies at the NEC.

Like this author, the questions most people are asking now are: When did she get to know about the more than 2.8 million US dollars, which Commissioner Sayor allegedly inserted into the NEC’s budget? How effective is her oversight or supervisory authority? As Chairperson, does she review or take a critical look at important documents that require her approbations, before releasing them to the public? Until Davidetta convinces the public that she is an effective manager, her accusation against Commissioner Sayor will make no difference in the alleged corruption case at the NEC.

Except proven otherwise, the LACC’s charges against Chairman Browne-Lansanah are cogent. If she refuses to honorably resign or walk away from the NEC, President George Manneh Weah must intervene politically. He must act swiftly in saving the Commission from the public ridicule it has suffered in recent times. The President should remove Davidetta for acts incompatible with her status. Although she and the commissioners of the NEC occupy tenured positions, any of them can be dismissed or replaced for a cause or causes. The crimes she is accused of are examples of such causes.

Davidetta allegedly violated the national code of conduct, which frowns on conflict of interest; and she engaged in money laundering. These violations are serious criminal offenses that have drawn the reputation and integrity of the NEC into public ridicule. The embattled Chairperson and her associates allegedly committed crimes against Liberia; and they must be held liable if, the CDC’s professed fight against corruption in the country is to be taken seriously.

As the LACC’s lawsuit against Mrs. Browne-Lansanah proceeds, some Liberians including opposition politicians and supporters of the embattled NEC Chairman have begun speculating in Monrovia that the unusual swiftness of the LACC in the prosecution of the Chairman insinuates a ploy by the Coalition for Democratic Change (CDC) administration to remove and replace her with a CDC zealot that will help the Party in swaying the outcomes of the 2023 presidential election in favor of Mr. Weah.

However, most Liberian intelligentsia including this author are ambivalent in accepting such claim without cogent evidence. Liberia has come a long way in terms of peace and stability; and Mr. Weah and the CDC wouldn’t covertly or openly engage in any act that has the capability of plunging the country into another political crisis. Mrs. Browne-Lansanah and her associates identified in the LACC’s indictment reportedly committed crimes against Liberia and they must be held liable if convicted. The fight against unbridled corruption in Liberia has got to start from somewhere; and for now, Davidetta and her alleged accomplices are unfortunately the perpetrators. The law must take its course!

Currently, Davidetta has no moral ground for staying at the NEC. If she doesn’t resign or get dismiss by President Weah, the repercussions of keeping her at the Commission will be profoundly huge as Liberia prepares for the 2023 general and presidential elections. The NEC will suffer an integrity problem that has the propensity of undermining the outcomes of the 2023 general and presidential elections.

About the author: Moses D. Sandy is a US based broadcast Liberian journalist. He’s co-host of the Issues Room, an alternative social media, mainly Facebook and You Tube, platform. Mr. Sandy is former Editor-in-Chief of the state-owned Liberia Broadcasting System (LBS). Also, he is an eminent Liberian community leader in the US.