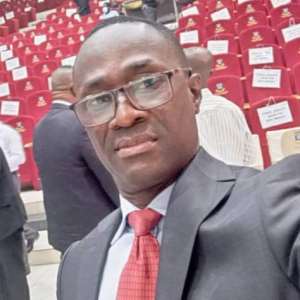 Lawyer Eric Delanyo Alifo, an outspoken NDC stalwart has urged the leadership of the NDC to allow true democracy to thrive in the party.

He wants the internal elections to be conducted at all levels of the party.

Lawyer Alifo states that not too long ago, there were attempts to skew the internal elections of the party by first conducting constituency to national elections before holding elections at the branches.

He said he had hoped that once that unpopular attempt was thwarted, he thought the party had gotten it right until he heard about new guidelines a couple of days ago.

According to him, the new guidelines directed that there shall not be new registration of members of the party.

It added that branch elections shall not be held at all newly created branches across the country, but instead constituency executives shall appoint branch executives for all the new branches.

Lawyer Alifo thinks these directives shall spell doom for the NDC before the 2024 general elections.

He urges all supporters of the party to wake up to this reality in good time.

READ HIS FULL STATEMENT BELOW:

REORGANIZATION OF NDC BRANCHES: ARE WE GOING TO BE MOTIVATED OR DEMORALIZED?

Many of us, supporters of the NDC, and particularly, our youth, have been waiting for a very long time for the leadership of the party to release guidelines for reorganizing our branches, constituencies, regional chapters, and the national leadership in order to prepare in earnest for the 2024 general elections.

Unfortunately, the guidelines were not forthcoming, and whenever we hear snippets of information about them, we are not encouraged by what we hear, but rather dismayed by them. Not too long ago, there was news of a process to introduce a change into the party's constitution to allow for constituency elections up to national election of officers to be held before coming to elect officers for the basic units of the party — the branches.

When the whitstle was blown, and there was uproar among our supporters, which thus attracted the attention of our pleasing upcoming standards bearer, and former President John Dramani Mahama, and he had to speak publicly to condemn the said attempt, many of us thought we had finally got it right, and some hope and confidence had returned among the rank and file of our supporters.

But just a couple of days ago, we heard again about the following new directives, among others:

1. That there shall not be registration of new members at the branches before the pending internal elections; and

2. There shall not be elections of executives at the newly created branches of the party, but instead, all the executives of the new branches shall be appointed by constituency executives.

Our information is that the main reason given for the decision not to allow for new registration of members was that such registrations may be influenced and manipulated by Members of Parliament through loyal constituency executives, almost all of whom are working closely with the MPs of their constituencies.

I just cannot make much sense of these new guidelines. Perhaps there must also not be new elections of constituency executives and primaries to elect PCs at all because these already seem rigged by these new directives. New contenders may only waste their time, resources, and energy.

In fact, the directives are recipes for disaster for the party, and I hope they shall be shirked or revised forthwith. Some of us are already working very hard to win back our supporters that have defected to the NPP in our strongholds, and these directives shall only serve to derail our efforts in our strongholds, and cause further damage to the party across many constituencies in the country.

Many of our supporters are on standby to register as card-bearing members of the party and to contest for various elective positions from the branches to national leadership, and I shall urge the leadership of the party to create a flexible opportunity and atmosphere for as many who would be ready and willing to present themselves for the positions, and to work for the party to do as they wish.

I am an agent for good administration and organization of our party; for true and total democracy in the party; and for full participation of the youth in the decision making process of the party. These are the reasons why I am regularly making these observations, and going through this struggle. I just want our party to be organized and managed in the right manner in order to remain attractive to all of us including new potential members.

I know I shall be making enemies within as I make these interventions, which have the tendency to disrupt the intentions of some powerful interests. But I am doing this because of my deep love for the party. Many of our youth are leaving in droves and joining the NPP, and I think we have the responsibility to run the party in a manner that shall win back their trust and confidence. It is therefore important for those who are managing the party on our behalf to so in the utmost interest of all of us. It is our prayer that they shall do just that and keep the party as strong as steel, and united forever.

Thanks a lot for reading.