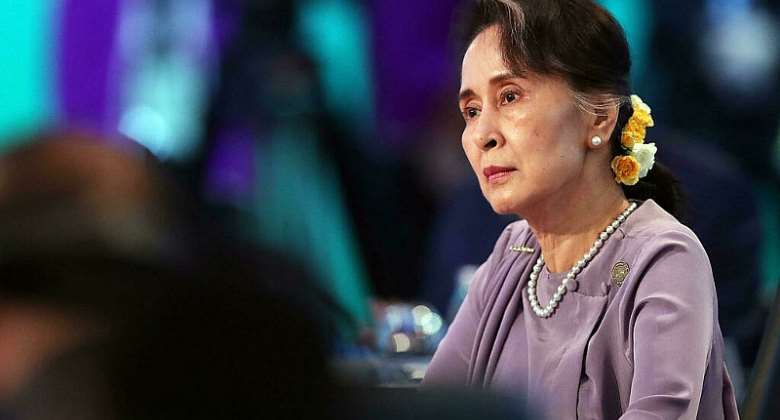 Myanmar's military rulership "pardoned to two years" a four-year jail term it had given earlier in the day to ousted leader Aug San Suu Kyi.

The reduction in the sentence came hours after criticism by the EU,  the US,  and the UN calling the sentencing "politically motivated" and a "blatant violation of human rights".

Earlier on Monday, EU foreign policy chief Josep Borrell had issued a strong worded statement on behalf of the 27 member states, saying that Suu Kyi's sentence "represents another step towards the dismantling of the rule of law".

Suu Kyi, 76, has been detained since the generals staged a coup and ousted her government on 1st of February, ending the southeast Asian country's brief period of democracy.

She has since faced a series of charges, including violating the official secrets act, corruption and electoral fraud, and she faces decades in jail if convicted on all counts.

Incitement
On Monday, the 1991 Nobel peace prize laureate was initially sentenced to two years for inciting public unrest and another two years for breaching Covid restrictions. Later in the day, the total sentence was halved.

According to New York-based Human Rights Watch, the 76-year-old de facto leader of Myanmar prior to the February military coup faces an additional 10 charges.

Those charges include possessing unlicensed walkie-talkies, corruption, and election fraud, carrying a total potential sentence of more than 100 years in prison.

Ousted President Win Myint was initially sentenced to four years but also had his sentence reduced to two years.

Contempt
"The European Union strongly condemns this politically motivated verdict, which constitutes another major setback for democracy in Myanmar since the military coup on 1 February 2021," Borrell said.

"The military's actions show complete contempt for the will of the people, expressed clearly in the November 2020 elections," he said.

"It is imperative that the Myanmar military authorities allow a swift return of Myanmar to the path of democracy," he added, praising the the people of Myanmar for rejecting the coup.

The United Nations High Commisioner for Human Rights, Michelle Bachelet, also issued a statement, charging that "the conviction of the State Counsellor following a sham trial in secretive proceedings before a military-controlled court is nothing but politically-motivated."

Special UN rapporteur for  Myanmar, Tom Andrews, warned that the proceeding that convicted Aung San Suu Kyi "should not be confused with a trial. "It is theatre of the absurd. She, and thousands of others, are guilty only in a system of injustice that punishes those who exercise the basic human right to speak and assemble freely," he said in a tweet.

The US, meanwhile, slammed the jail sentence as "affronts to democracy and justice."

"We urge the regime to release Aung San Suu Kyi and all those unjustly detained, including other democratically elected officials," Secretary of State Antony Blinken said in a statement