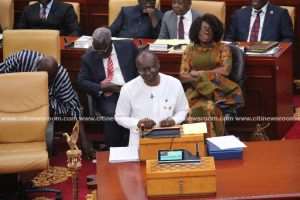 The 2022 budget is themed ‘Building a Sustainable Entrepreneurial Nation: Fiscal Consolidation and Job Creation’. It is expected to consolidate the macroeconomic gains achieved post Covid-19 and address the economy’s short to medium-term risks.

On revenue, the government has projected to raise GH¢ 100.5 billion in total revenue and grants in 2022 compared to GH¢ 72.4 billion projected in 2021. As at the end of September 2021, provisional total revenue estimates stood at GH¢ 47.2 billion compared to the programmed amount of GH¢ 51.3 billion. The revenue target for 2021 is likely to be missed should tax compliance derail. The government envisages increasing total revenue as a percentage of GDP from 16% in 2021 to 20% in 2022. Key revenue measures include the imposition of an Electronic Transaction Levy (e-transaction levy) of 1.75% on the value of digital transactions and exempting daily transactions of a cumulative value of GH¢ 100. Fees and charges are also expected to see an upward adjustment by 15%. The government’s revenue mobilisation drive is not ambitious enough to grow the direct tax-paying population from the current 2.3 million out of a labour force population of 12.9 million.

Domestic financing estimate for the end of September 2021 reached a provisional figure of GH¢ 20.39 billion compared to a projected estimate of GH¢ 14.06 billion. This trend is worrying as the government is actively in the market crowding out the private sector for credit.

Public debt hit GH¢341.76 billion (US$58.24 billion) as at end-September 2021. Ghana’s public debt is rising steadily. From a nominal public debt stock of GH¢ 122.2 billion in 2016, it rose to GH¢ 291.6 billion by the close of December 2020. With the fiscal challenges posed by the Covid-19 pandemic, financial sector clean-up and energy sector debt, Ghana’s debt and its accompanying high interest rate could trigger macroeconomic instability in the medium term.

The Services sector continues to be the main driver of Ghana’s GDP, followed by Industry and Agriculture. The Services sector recorded a growth rate of 7.2% in the first half of 2021 compared to 2.3% last year. Industry, however, contracted by 1.3%, mainly resulting from the significant derailment in growth in the mining and quarrying subsectors, which fell by 11.2% and 18.9%, respectively. A main contributor to the contraction was the -13.4% growth in the oil sub-sector due to low production. To spur growth in the oil and gas sector, the Government must structure policies to ensure maximum economic recovery from petroleum resources, especially in the wake of the global energy transition agenda. In addition, corporate tussles within the sector like the ENI/Springfield tussle must be resolved quickly to make the sector attractive.

The e-levy of 1.75% is expected to generate GH¢ 6.96 billion in 2022. According to the government, Ghanaians who transact below GH¢100 a day average 35%; hence it will not negatively affect the poor. Government should further engage with stakeholders to review the levy and explore other revenue generation measures such as curbing illicit financial flows and corruption.

There is also evidence from studies conducted in Kenya and Tanzania that suggests a likely reversal to cash transactions by citizens in a bid to avoid taxes that are deemed extortive. The new levy will likely erode the gains made from creating a formal banking system to foster inclusion for persons within the informal sector. We expect that retail transactions that require e-payment methods will experience sharp declines in the coming year. This will be in contravention of the government’s promise to create a cashless economy.

In April 2019, the government slashed Benchmark Values by 50% on selected general goods and 30% on vehicles. This policy has been reversed, and it is likely to reduce the competitiveness of Ghana’s port. The 2021 budget is projected to raise the import duty of GH¢6.6 billion. This is expected to increase to roughly GH¢ 9.03 billion in 2022. The high import duty is not the only component making Ghana’s port uncompetitive. Government should review all other cost components at the port to make Ghana’s port competitive among the ports in the sub-region. On the other hand, the government should be committed to import substitution industrialisation, which is the surest way to grow the domestic economy.

The reduction of withholding tax on sale of unprocessed gold by small-scale miners from 3% to 1.5% will positively impact the industry and to a large extent help to curtail the smuggling of gold.

In an effort to reduce travel time and vehicular traffic on roads, the government has removed road tolls. However, it will compensate for the loss in revenue through an imposition of e-levy of 1.75% on electronic transitions. The impact of this levy has been discussed above.

The government’s quest to support youth entrepreneurs with up to GH¢ 10 billion together with its partners in the medium term is commendable. As trading under the African Continental Free Trade Area (AfCFTA) progresses steadily, youth entrepreneurs can take advantage of the market size of 1.2 billion people with a combined GDP of US $ 2.5 trillion.

The 2022 budget attempts to resolve the structural problem of widening the tax net, but a lot of work remains to be done in this area. Expenditure rationalisation is a prudent option to reduce the budget deficit and high public debt. Going forward, broader stakeholder consultations are needed in the future before arriving at policy options.

C-KADD GLOBAL is a consultancy firm with over fifteen (15) years of combined experience of partners in economic consulting and general business advisory services. Our primary focus and service lines are;1. Economic Consulting; 2. Energy and Petroleum; 3. Accountancy and Tax Services and 4. General Business Consulting.

Let’s come together to build a resilient, prosperous society...
17 minutes ago