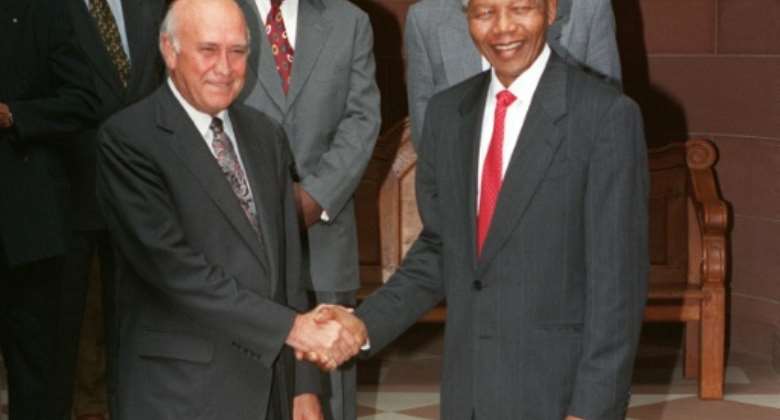 De Klerk's death-bed apology for apartheid has failed to pacify many in the country who felt he didn't do enough to atone for the regime's sins. By Philip LITTLETON (AFP)

South Africa on Tuesday declared four days of mourning for the last apartheid-era president FW de Klerk, ordering flags lowered to half-mast ahead of his funeral this weekend.

De Klerk, who helped steer the nation to democracy but never fully owned up to the horrors of the apartheid past, died on Thursday aged 85 after a battle with cancer.

His family will hold a private funeral on Sunday.

"President Cyril Ramaphosa has declared that the national flag be flown at half-mast as a mark of respect," his office said in a statement.

The mourning period will run from sunset on Wednesday until Sunday evening.

The government will hold a state memorial service in his remembrance, at a date to be agreed on with his family, the statement said.

In a video message released just hours after his death, De Klerk apologised "for the pain and hurt and the indignity and the damage that apartheid has done to black, brown and Indians in South Africa".

But that death-bed apology failed to pacify critics, who felt it did not adequately denounce apartheid nor clarify his personal role in the torture and killings used to enforce white-minority rule.

One confirmed dead in youth, Police clash at Kotobabi Market
10 minutes ago