Why Gambians should vote Sallah or Barrow, and urge others to drop and endorse 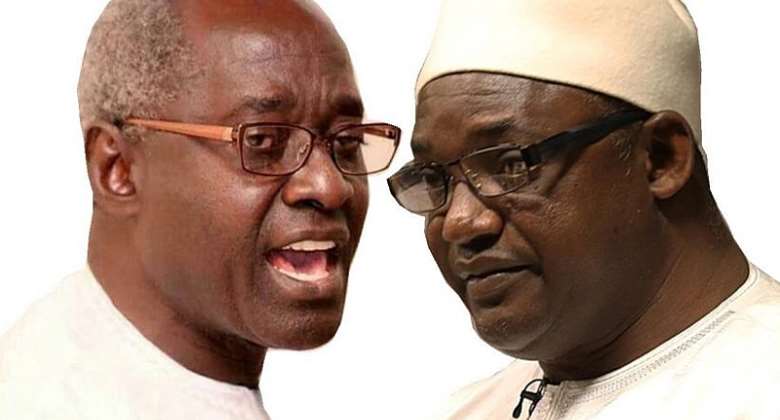 The Gambia is heading for another critical election, and it is vital for the world, not just Gambians, to honestly advise for prosperous and more just Gambia. Voting is not about personal interest or even whom you 'want' to vote for, but who you 'should' vote for. You are choosing a leader who will affect others' lives lot beyond atom's weight (mizghalazaratin), so the Lord will judge not just your intentions, but the probable affects you knew about, or should have known about if you 'use your eyes, ears, and faculties ', as per ch. 67 and others. It is vital for other candidates to avoid late dropping and understand the simple majority system in the Gambia largely favors the incumbent, with exceptions. Both guilty Jammeh and questionable Adama Barrow knows this fact and bank on the assumption the self-centered opposition will refuse coalition and endorsing the candidate with higher chances of winning the incumbent. Where the opposition party leaders fail, the ordinary citizens must avoid failing, and the best leading candidate must seek support from party leaders and its followers, but also consider last minute fight against destructive/disruptive opposition candidates. Among the final qualified candidates, Mr. Halifa Sallah has the highest potentials of defeating Barrow and helping the Gambia gets closer to higher path. Mr. Sallah and the PDOIS party are not perfect, but they are much better than the remaining opposition leaders.

Where are the Gambian liars who claim Mr. Ousainou Darboe 'fought for the Gambia the longest'? Tell them not to distort history, to learn from me and repent, or risk much harder confrontation from the truthful angels and stern God. They use the fractional facts of '22 years' Darboe under fought Jammeh to mislead the young Gambians and those with one eye, one ear, and half a mind? Halifa Sallah fought for over 30 years, but 22 years is somehow longest? Even during the 22 years, Halifa Sallah fought lot harder than ousainou Darboe, but Darboe suffered more due to his own poor ways of fighting and Jammeh's brutal cowardice.

Why mr. Mama Kandeh should drop and endorse Halifa Sallah? Kandeh is very similar to Darboe in self-centered, arrogance, probable tribalist, and history of refusing to endorse others within and outside a party, even in vivid questionable systems like simple majority. In 2016, Kandeh nearly kept Jammeh in power and that was precisely why I then said, vote Barrow or Jammeh... I clearly wanted Barrow to win and honestly thought Kandeh may be worse than Jammeh if empowered. I wrongly predicted Jammeh will likely win because of a divided opposition in a simple majority, not through stealing votes. His refusal to endorse Barrow means Halifa and others were more humble and wanted Jammeh out more than Kandeh; his refusal to endorse Sallah so far means he would have probably refused Sallah as coalition candidate in 2016. Do not endorse him too late for position, but you can demand Sallah to publicly support one term presidency in our constitution.

Why disqualified candidates like Banky should endorse Sallah with reasonable conditions? Rather than demanding Sallah to publicly support cannabis legalization, you have much higher chance to convince him to support the one term limit you and I support. Regardless of who sits, the Gambia and most of Africa will legalise cannabis within two to five years, if I am free and thriving. Sallah has already publicly pledged to serve one term, by helping him win and significantly develop the Gambia than supporters of Barrow claim, we will get closer to having one term limit. I already wrote extensively how one term limit may help Africa and the world, so I do not want to repeat myself where I have other issues to highlight.

Why Essa Faal should drop and endorse Halifa Sallah or Barrow? Mr. Faal says he saw what happened during the five years, so he jumped into politics or only if he has to lead? Was Mr. Faal blind or growing when Jawara was destroying the nation with low standards, mass corruption, etc? Mr. Sallah went into politics then and allowed Sidia Jatta to lead; he allowed a Nadd coalition to lead him; a 2016 coalition for TRRC and Essa Faal to brave up after being over paid to confirm the atrocities sallah, myself, and others exposed for free or love for country. It is not a crime to want to lead or form a party, but now that you went up to being one of the qualified candidates with reasonable support, if you urge your crowd to vote Sallah, it becomes your first real political sacrifice to a veteran who can help you effect change. Again, you can condition for policy, not position. If he agrees on one term limit, even if it means 6- or 7-year's election cycle, Gambians will have reason to consider Faal for leadership...

I honestly do not know much about candidate Abdoulie Jammeh, but he cannot be very far from Essa Faal, except Faal is much more popular. So, I ask him to drop and endorse Sallah or Barrow.

Where are the Gambians who claim Darboe is humble? They must repent and urge their candidate to drop and endorse Halifa Sallah.

Arrogant Darboe does not know gratitude to Sallah, but naive Barrow thought he will know gratitude to Barrow? When the Nadd coalition failed, gratitude was supposed to mean I will let others lead but will not retire from politics. I will support anyone who can take jammeh out, but God have to put him in prison for 'Moses Barrow' to rescue the cowards more than the Gambia? Well, it was Halifa and others who were the moses, not just Barrow. Arrogant Darboe was right in questioning the M.O.U of 3 years, but he was wrong in his Arrogant how. As mere vice president, he demonstrated arrogance and vividly hide on legality where diplomacy and sober press conference could have tamed the situation. This is a perfect example of how Darboe may be worse than Jammeh if empowered, and will be lot harder to fight because he will be legally unjust, indifferent, and inconsiderate...

Where are the lying Gambians who claim Darboe is brave? Forming a party or accepting to secretly lead banned corrupt PPP and NCP coalition in a new name is not enough to qualify as brave. His vivid cowardice in hiding at the American embassy emboldened Jammeh and contributed to the atrocities of Jammeh against Darboe and Gambians. The devil just had to whisper in Jammeh's ears and fractional mind: 'your bullying works, don't you see even their opposition leader is hiding in fear, please bully more...'

Where are the lying Gambians who claim Darboe was rich and successful, and not in politics for riches? Fractional facts can be very dangerous. I am not denying Darboe was well off compare to 80 percent of Gambians, but greed is about getting richer... many rich folks beyond Trump and Bloomberg understand politics can get you richer through fame and connections, especially after office. Darboe could have had one or two term limit to lead UDP In the party 's constitution. He can then still support others to win or he is the only one capable of winning in UDP and the Gambia? If he is truly not about 'me only' or want Barrow out, then let him call a press conference and endorse Sallah in gratitude. Once a favor deserves a return, twice or more a favor deserves what?

Why Halifa should secretly and publicly reach out to party leaders and opposition sympathizers? Secret reach out without secret deals for position is a form of humility PDOIS is yet to be known for, but vital. Public reach out is a combination of bravery and humility that is equally vital. Within the last two weeks, it is Vital for Halifa to say: vote Sallah or Barrow, if other candidates ungratefully refuse collaboration. Barrow needs a hard lesson, he may be a fairly good person, but he has terrible advisors, including himself. Barrow can say many things about Darboe and other opposition leaders, but his conscience will hunt him if he choose to lie against Halifa, who significantly helped him to win than Darboe as a person.

Why Barrow should consider saying, 'vote for me or Sallah'? We have seen the dangers of Darboe when Barrow was blindly calling him 'father', changing the constitution for him, etc. Barrow did not only allow Darboe to corrupt him in political greed, but he emboldened Darboe until two greeds clashed . Even if Barrow was to win, if Darboe finishes third or worse , it will teach him and his fans some hard lessons.

Why Darboe fans cannot say much against Barrow and nothing against Sallah? For over three years, Darboe was in many ways running Barrow and the country. With exceptions, Barrow actually improved after the split with Darboe. It became a rude awakening to him. How many great things Barrow did when Darboe was there? A lying NDP with huge political lies is now part of Gambia's history. The very APRC they focused to over demonised is now the partner in crime officially, but unofficially while Darboe was there. Barrow and Darboe were hiring APRC top folks in the name of experience. Some fans are attached to a person, not policies. Did you switch when a person or policy was changed?

My leaning is clearly I will vote Sallah, but not yet fully decided. I have publicly criticised both Sallah and Barrow, but the two seem much better than the rest. Dr. Ceesay, Ms. Sock, and others must endorse on time and know silence is indifference and history will judge. When you hear lies about or against your country, ch. 103 demands you exhort them to truth... some will repent and others will be confronted if they continue to lie. May God bless Showlove Trinity : let's learn, let's work, let's have fun.