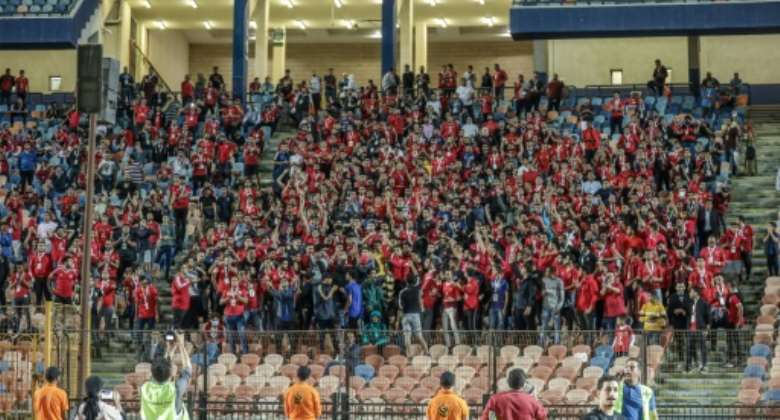 Some of the 1,000 Al Ahly fans allowed to watch the match at Cairo International Stadium, after a long absence. By - AFP

For the first time in years fans returned to Cairo's International Stadium on Friday for a classic local football clash between two of Africa's greatest rivals, Al Ahly and Zamalek.

Each Cairo-based side had the right to only 1,000 fans -- in a stadium with more than 70,000 capacity -- but their presence meant a return to partial normality after a long silence initially because of fan violence, and then the coronavirus pandemic.

In 2020 they battled behind closed doors, also at International Stadium, in the first ever CAF Champions League final between opponents from the same country.

"A big thank you to the public who supported us and were by our side," Al Ahly defender Akram Tawfik said at a post-match news conference.

The Cairo International Stadium has a capacity of more than 70,000, leaving a lot of room for these Zamalek supporters. By - AFP

For midfielder Amr El Solia, "the return of the public gave us an enormous boost for a three-point match against a ferocious opponent like Zamalek."

"There's a young generation that has never seen Al Ahly and Zamalek compete in front of their supporters," one fan, Ahmed, tweeted to hail his side's victory.

"Tonight they saw that Al Ahly fans were there."

When the teams clash on the pitch, authorities always fear unrest between their supporters in the Arab world's most populous city.

Security forces were stationed inside and around the stadium, where only minor incidents were reported in contrast to years past.

In February 2012 more than 70 people, mostly Al Ahly fans, were killed during a stadium riot in Port Said at a match between the Cairo club and local team Al Masry.

It was one of the world's deadliest football clashes and led Egyptian authorities to ban fans at all domestic matches.

Three years later in 2015, after the ban on attendance was lifted, at least 20 Zamalek fans died after a stampede at the June 30 Stadium's gates, prompted by police use of teargas and live bullets.

That led to a reinstatement of the fan ban.

Al Ahly players celebrate a goal on the way to a victory they said was boosted by having fans in the stands. By - AFP

Al Ahly's and Zamalek's respective "Ultra" groups -- fanatical organisations synonymous with inter-club tensions -- announced their dissolution in 2018, in another step toward a public return of the most-watched football classic in the Arab world.

Then the deadly coronavirus intervened, and since March 2020 no matches in the national championship were attended by the public.

The Egyptian league clubs' association said last month that each team would be allowed to trial the return of 1,000 fans in the new season that began in late October.