Lord Commey's reckless talk is a threat to Ghana's security 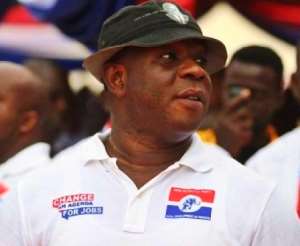 The recent reckless speech made by one Lord Commey, an NPP politician, is not only a threat to Ghana’s security but can also generate violence in the country if the unwanted NPP government possibly rigged the elections again in 2024.

Should in case this happen, the Electoral Commission’s boss Jean Mensah's life could be in danger again more than before because she knows what she did to keep the incompetent Nana Akufo Addo in power.

What Commey did is a political strategy because like the majority, he has smelled the total failure of the NPP government, therefore, he thinks he has to do something for his political party to hold on to power in 2024.

However, it is up to Jean Mensah, she should be very careful. The Electoral Commission’s boss, Madam Jean Mensah, should remember she is there to serve the people, not a political party.

She should, therefore, take her job seriously by not playing with people's emotions or igniting violence in the country.

After the 2020 elections, many are still hungry and angry.

If she couldn’t do the right thing in 2020 and still wants to repeat the same crime, she committed with impunity in 2024, then I wish her good luck.

The truth is you don’t need to be educated, to be a political analyst or a soothsayer, to know that the NPP government has totally failed and disappointed the people, therefore, that political party has zero percent chances of winning the 2024 elections.

The winning of the NPP government in 2024 is totally impossible; Commey knew that this is the reason he made that gathering spewing out the venom.

He knew Jean Mensah is there, therefore, she can repeat it but then if Jean is a fool, then she can go on to accept the commands of the NPP's leader, instead of the people.

In Ghanaian politics, there is not only nepotism and tribalism which have destroyed the entire foundation of Ghana but also power-thirsty politicians, that don’t care about whatever they do or say, even if that could lead to violence.

Power corrupts the mind; therefore, the influence of power-thirsty politicians, their reckless attitudes, consisting of insults, corruptible activities, and unprofessional behavior in Ghanaian politics, demand the call for psychiatric evaluation.

Despite the unfortunate incident which happened during the 2020 elections resulting in the declaration of Akufo Addo, the loser a winner, due to the fraudulent activity of the Electoral Commission’s boss, Jean Mensah, Commey still had the guts to spew out such rubbish.

In a time that everything in Ghana has been ruined by the NPP government, a political party that had previously promised to make Ghana a better country, Commey shouldn’t have made such a reckless and provoking speech because the youth in that country can explode if they can’t take it any longer.

Lord Commey confirms what Ghanaians have been saying all the time that the president, Nana Akufo Addo, has no respect for Ghanaians because if he has respect for the people, Commey wouldn’t have any platform to stand on it to make such insignificant provoking comments.

Commey should understand if he is not a fool that the majority of Ghanaians not only have no interest in the Ghanaian president, Nana Akufo Addo but the entire NPP party. In fact, the NPP politicians are worse than the NDC government.

At least, the former government that was declared corrupt by Ghanaians has left many uncompleted projects surrounded by overgrown weeds. After all these years Nana Akufo Addo became president, he must tell the intelligent ones among Ghanaians what he has achieved.

According to Commey, the former Ghanaian leader, the late John Jerry Rawlings said, “Hand over power to whom?” Will the ignorant Commey stand on this comment to deny the majority of Ghanaians that have lost interest in the NPP government a better life? What kind of by-force power is this?

It seems to me that since Ghanaians didn’t react or demonstrate against the Electoral Commission in 2020, the NPP still thinks they can let history repeat itself without any consequences. If this is exactly what is in Commey's mind, then he must be careful of what he wishes for.

Ghana is for Ghanaians, it is their votes the politicians depend on to take posts in that country, therefore, if they don’t want you, just pack your bags and leave.

The NPP government must begin to pack out their belongings from the Flagstaff House before 2024 because the majority of Ghanaians say so, it's not me who is demanding that.

The Clerks of Parliament walked me to my reserved seat in th...
52 minutes ago