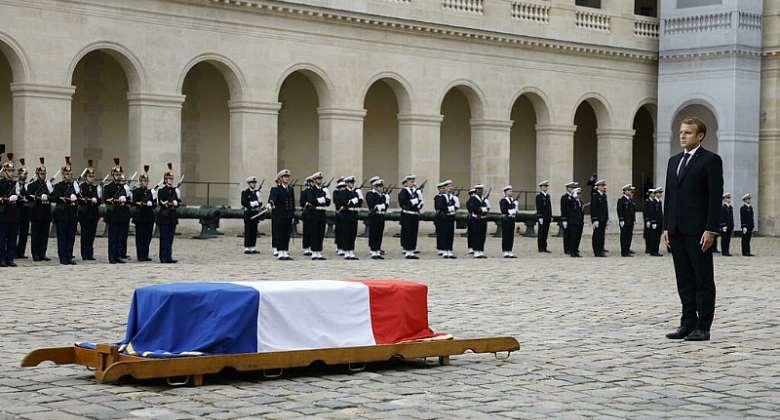 French President Emmanuel Macron on Friday paid tribute to Hubert Germain, the last surviving member of the Order of the Liberation and an officially designated hero of the resistance, at a solemn ceremony at Les Invalides in Paris. Germain's passing this week at the age of 101 marks a turning point in how France will continue to remember its war heroes.

His coffin and medals of honour were carried during a military ceremony also attended by Prime Minister Jean Castex, Defence Minister Florence Parly and other officials.

"He was known for being unruly as a teenager, and his disobedience worried his family. His only loyalty lay with his nation," Macron said in an address.

"Even though he left his friends behind when he went to England, he found new friends and a new family who responded, like he did, to General de Gaulle's call."

Germain joined General Charles de Gaulle in the summer of 1940 and fought with the resistance movement in Bir Hakeim, El Alamein, in Libya, Tunisia, Italy and in France until 1944.

It was back in 1940 that de Gaulle created the Order of the Liberation, to reward exceptional actions taken by military personnel during the liberation of France from Nazi occupation.

Germain was among 1,038 men and women decorated for their heroism, receiving his honour in November 1944.

It's the second highest order in France after the Légion d'honneur.

Macron will preside over a ceremony for Germain on 11 November – Remembrance Day marking the end of World War I and the victims of conflict – at the Arc de Triomphe in Paris, as well as at his burial.

Germain will be laid to rest alongside other members of the elite order at Mont Valérien, the military fortress west of Paris where more than 1,000 resistance fighters and hostages were executed by the Nazis.

Macron is also expected to announce changes to the way the Order of the Liberation is now handed down, seeing as the last of the Resistance fighters has died.

"Hubert Germain had already spoken to the President about his ideas of transforming the Order," Christian Baptiste, national delegate who oversees the Order, told France Info.

"He felt that it only made sense to have this award if it could be useful for today's society," referring to a possible transfer of this award to the young generation.

"The Compagnons (companions) gave their blood, sweat and tears for the Order.

"He (Germain) felt it was necessary to keep the flame of patriotic duty burning so that young people would find inspiration and follow in the footsteps of those who have served France."