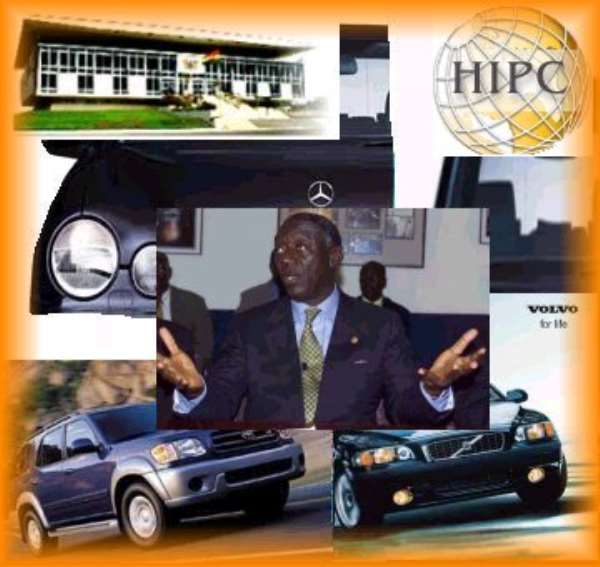 Since intense public outcry erupted in Ghana in October 2001 that members of Ghana’s Parliament were planning to award themselves some whooping sums of Twenty-Five Thousand US Dollars (US$25,000) to purchase cars, both the government as well as the Members of Parliament have not been able to get the story straight.

First the Office of the President feigned ignorance; that the President was unaware of the arrangement. That story got nowhere. No-one, apart from the President’s Office, was prepared to “believe” that the Minister of Finance will approve these ridiculous grants to Members of Parliament without the knowledge of the President. Then a story was put out that it was only an idea that had come up for discussion and that no decision had been taken.

But the pronouncements of some Members of Parliament including some senior members of the government suggested that there was truth in the story and that they were bent on taking the grants (loans?) no matter what the public mood and opinion was. Senior Minister J. H. Mensah put it more bluntly when he asked a reporter whether the public expected MP’s to ride on bicycles to visit their constituencies.

Ghanaian citizens, both at home and abroad, have been outraged and very consistent in their opposition to this daylight robbery of the public Treasury under the guise of “loans”. Public consensus was that the state of the economy could not support the doling out of such amounts to Members of Parliament under the guise of loans when all the available statistics and facts indicated that the “loan” recipients will be in no position and had no capacity to repay them. In effect, they will be just fat welfare cheques.

Just as Ghanaians thought that the issue was buried, news coming out of Accra indicate that the MP’s have granted themselves those big welfare cheques to buy cars. In confirming the story, Finance Minister Yaw Osafo Maafo said over 100 MP’s have already taken delivery of their cars and that they have three years to pay off the loans which range from US$15,000 to US$20, 000.

This story really shows that those who find themselves in the Parliament of Ghana (some of them by accident) think that they are above the law and care less about public opinion. We all know that the MP’s have absolutely no capacity nor the inclination to repay these “loans”. We know that if we take their whole salaries and allowances for the remaining three years of their terms, that will not even account for half the amount of the “loan”, not counting interests.

Since the inception of the last Parliament in January 2001, the parliamentarians have been behaving as if they are the most righteous human beings in that part of the planet. Over the past fifteen months they see everything wrong with every institution and arm of government in Ghana apart from themselves. But they have been the ones who have openly thumped their noses at the public that they claim to be representing and in whose interest they “fight”.

This car “loan” issue will come to haunt these people in the years ahead. Ghanaians will definitely remember this at the appropriate time. The MP’s have lost their moral obligation to criticize corruption, greed or arrogance in public life because these are the very attitudes that they have openly and defiantly displayed in this car welfare cheque saga. For MP’s who are in their third term in Parliament, this will be their third car “loan”, none of which have been paid back in full. If some of them get re-elected in 2004, they will take new car “loans” in the “new Parliament, their fourth and on and on it goes.

Ghanaians will be watching their MP’s pronouncements from now on and we hope they will not really take them seriously except those that concern the comfort and good living standards of the members of Parliament themselves.

Ghanaian News Canada Views expressed by the author do not necessarily reflect those of Ghanaweb.