Why the Internet may be Africa's best hope... 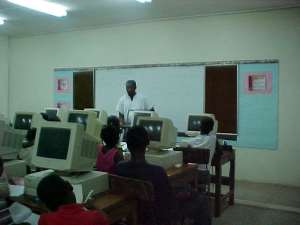 A village in Ghana -- and a new UN report -- suggest the Internet may be Africa's best hope By Nicholas Thompson for Boston Globe PATRIENSA, Ghana -- Down a steep hill, on the edge of the deep green forest that encircles this village in Central Ghana, a man with a strange growth on his upper arm lies on a wooden bench in great pain. Mary Agykpomaa, a local healer, has just cut a hole in his shoulder and another one in his chest. Now she's squirting a strange potion into one hole and watching it ooze out of the other. She boils leaves, burns snakes, adds mud, and then stews it all up into a potion that she uses to treat AIDS, bad vision, and pretty much everything else.

Meanwhile, Osei Darkwa, a genial 43-year old man with a slight paunch and vast ambitions, is strolling around, taking pictures of the patients with his digital camera. Soon he'll upload them to his webpage, complete with Java scripts, Flash animation, and a soundtrack of African drummers. "I want the world to know her," he says.

Born in Patriensa, a remote village of mud huts and minimal electricity, but educated in the United States and Europe, Darkwa believes in Agykpomaa's healing skills, and his photographs prove that she has cured at least one ghastly tumor. But he also knows that Merck and Pfizer make better medicines than Agykpomaa's brews. That's why he's building a 10-room hospital on top of the hill, where every room will be connected via satellite to the Internet and thus to the Centers for Disease Control and Prevention website. He has stacked dialysis machines and oxygen pumps in a corner of one room. There aren't any doctors in the village, but Darkwa figures he can find instructions on how to use them somewhere online.

Darkwa isn't just seeking better health care, though. He also wants to build a radio station and a data-processing facility for foreign companies. He has already constructed a solar-powered headquarters called the Telecenter, imported scores of second-hand computers from the United States, and started computer literacy courses. He has the area's first photocopier. And he has set up a crafts village where local residents make African art they hope to sell online. He's signed a deal to provide computer training for employees funded by Florida-based Citrix Systems, a company that provides software for use at a nearby fish farm.

Considering the obstacles he faces, Darkwa has surely set some of the most ambitious goals of anyone on the planet.

Forty years after sub-Saharan African nations won independence, and 40 months after the NASDAQ peaked, the idea that the Internet might help save the continent sounds naive and even antiquated. But according to a report issued Thursday by the United Nations Conference on Trade and Development (UNCTAD), the Net has immense potential to help create business opportunities in developing countries. The number of users online in Africa is still tiny, but it has doubled in many countries around the world over the past two years and looks likely to keep climbing. In Patriensa, it's increased from zero to scores, with many more to come if Darkwa has his way.

While there are many reasons for Africa's woes, the story starts with the continent's crushing geographical isolation, which has made it unable to benefit from technical and cultural innovations elsewhere. As Jared Diamond has explained in his book "Guns, Germs, and Steel," writing developed in Egypt in North Africa before 3,000 BC, but it spread throughout Europe and even South America well before it made its way anywhere south of the Sahara.

Now Africa is suffering a new form of isolation: a disconnect from the world's increasingly interconnected economic system. Companies might make shoes with laces from Jakarta and soles from Rio while a supervisor keeps watch from Berlin. But nothing happens in Dakar. As the network of globalization hums, Africa remains unplugged.

This latest form of disconnection, however, is more easily solved. Given that the same satellites circle above Idaho and the Ivory Coast, setting up the Internet is not difficult. And it's vastly easier than crossing the Sahara has ever been.

To Darkwa, information technology represents the way up and out for his village, country, and continent. Connecting Patriensa to the world, he believes, will allow people to access the world's greatest library, read the news, and learn that a leader can be more than someone with a big belly and a sack of gold that he's willing to barter for a vote. It can make the farmers actors in the international cocoa market by allowing them direct access to global markets. According to the UNCTAD report, coffee farmers in Brazil have been able to double the prices they receive by selling directly through online auctions instead of passing their coffee beans up a chain of middlemen until they finally reach a consumer abroad.

The Internet is still far from an African panacea. Many of the continent's first technology jobs have been simple outsourcing tasks for foreign countries, such as typing in handwritten New York Police Department tickets. But these jobs can open the door to more complicated and better-paid work as companies start seeing that the continent is open for business and programmers improve their skills -- moving from data entry, for example, to software programming. In India, according to the UNCTAD report, exports of computer software comprised nearly one-fifth of the country's total exports last year.

High technology is probably the fastest growing industry in Ghana. Affiliated Computer Services, which processes health-care claims online in Accra for American corporations, has created more jobs nationally than any other company in the past three years. The jobs pay only about one dollar an hour, but that's still vastly better than the dollar a day that the average Ghanaian lives on.

Of course, a number of the customers of Ghana's Internet cafes are more interested in Visa-card scams than cocoa prices. And while Darkwa has convinced some American companies to donate the computers, he's also had to bring liquor to local chiefs, wrangle with nearly impassable bureaucracies, and staff his center with people who have rarely held full-time jobs. He has been unable to get any loans from local banks, which shouldn't be that surprising in a country that doesn't have checks, credit cards, or clearly defined land rights that can be used as collateral. And then there's the language problem. While everyone learns English in school, many people in Patriensa don't speak it at home.

Still, Darkwa sees much to encourage him. One night several months back, a young boy, probably about 10, wandered into Darkwa's house and started tapping at the computer. He didn't know to press ENTER to create a new line. But slowly and surely, he pecked out a love letter to a girl in the town. As his mother called him out of Darkwa's house, he promised to come back to finish his letter.

This boy's not a dot-com entrepreneur or an active citizen of the globalized world yet. But he will have a shot at becoming one, as long as Osei Darkwa gets his way. Nicholas Thompson is a senior editor at Legal Affairs.