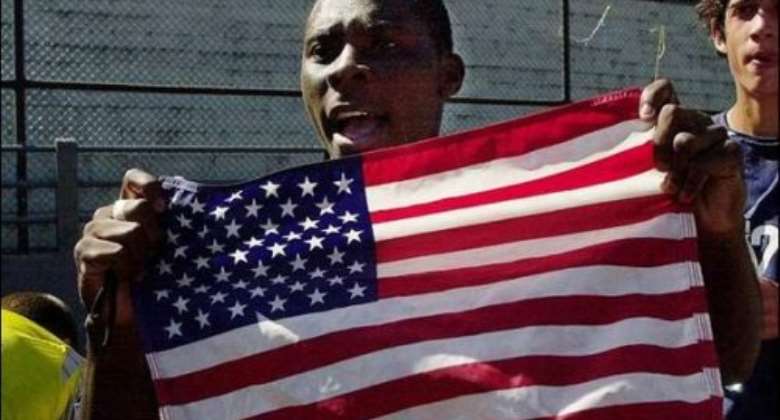 Hold off the hand-wringing over Freddy Adu.

Spare us the sermons about child labor.

Despite what some people are saying, paying a few million dollars to a 14-year-old to play pro soccer is not exploitation. It doesn't mean thousands of kids will run breathlessly off rec-league fields this weekend and demand to talk to agents. All it means is a windfall for one very fortunate family.

Adu and his mother, Emelia, took a gamble a half-dozen years ago, after she won a State Department visa lottery, uprooted her family from Ghana and staked their future on the United States. Now, American soccer is returning the favor.

"He is widely considered the best young soccer player in the world," Major League Soccer commissioner Don Garber said the other day, announcing the league's four-year deal with Adu. "And we believe that playing in his home country, in MLS, will further develop him as a player and, most importantly, as a person."

The prodigy business is still risky, but it has come a long way since Mozart died haunted and broke. And in the sports world these days, with TV execs, league presidents and sportswear manufacturers all in wild-eyed pursuit of the next big thing, broke is almost out of the question.

Those prodigies whose gifts are largely physical play the game earlier, and if they don't burn out, become serviceable — if sometimes forgettable — pros. A precious few combine those skills with imagination and change the game forever.

Hockey great Wayne Gretzky picked up hundreds of assists by parking himself behind an opponent's net and firing passes to his onrushing teammates. One day, after noticing the goalie never turned around while sliding from post to post trying to anticipate the pass, Gretzky simply flipped the puck over the net and banked it in off the goalie's back.

Imagination remains the hallmark of Tiger Woods' game. For all the breathtaking shots he's produced, the ones that inspire the most awe remain the ones he improvises to get out of impossibly tough situations. Shaping shots was a habit he started working on at age 7 and never quit.

While many players learn to hood the face on their clubs to create "knockdowns" — typically mid- to short-iron shots that bore through the wind — Woods patiently taught himself to do it all the way through the 3-wood. With that club, the ball not only travels 75 feet high, but a ridiculous 270 yards down the fairway by the time it stops rolling. Who wouldn't like to have that shot in the bag when your tee ball has found the trees?

If Adu turns out to be that good, the few million cobbled together to sign him would be America's biggest bargain ever in the world's game. The most unremarkable thing about Freddy may be, that like most 14-year-olds, he thinks he's ready for just about anything. At the MLS signing, he spoke with ease and confidence, and without notes. He went right to the bottom line: "If you're good enough, you're old enough."

He plans to be good enough to earn a place with DC United (news) next season and with the U.S. national team for the 2006 World Cup, which starts a week after his 17th birthday. Adu will have to be very good by then to impress current U.S. coach Bruce Arena.

"There are young athletes in every sport in this country and around the world that are highly regarded by the adults at early ages that never meet the expectations of the adults," he said.

Claudio Reyna, one of a dozen American players competing in the top leagues in Europe, was slightly more upbeat.

"It's great that he'll be wearing our colors for the next 15 or 20 years. And it's nice that one of these rare gems has finally landed on our shores."

But Reyna, who plays for Manchester City in England, cautioned about expecting too much.

"There are players in leagues in England, Germany, Italy representing countries from all corners of the world. That never was the case 10 years ago. There are Americans, Japanese, Chinese, Koreans. Any country can produce a good player," he said.

Soccer is not America's game, and may never be. But genius in any sport, especially in someone so young, is so rare that it hardly needs translation.

Go watch the grainy black-and-white highlights of Pele from 45 years ago and it's easy to see what mesmerized the rest of the world. He was 17 when the 1958 World Cup began and looked like a boy among men. By the end, he left little doubt about who was master of it all.

Jim Litke is a national sports columnist for The Associated Press. Write to him at [email protected]