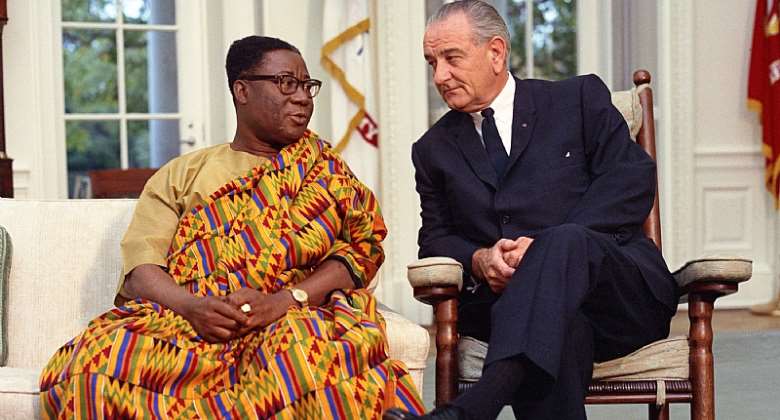 One month after the overthrow of the CPP-led-government of Mr. Kwame Nkrumah, General Ankrah, chairman of the NLC, wrote a personal letter to the then United States president, Lyndon Johnson.

General Ankrah gave the reasons that forced the Army and Police to remove Nkrumah from power.

Accra, March 24, 1966.
My dear President Johnson,
I am taking this opportunity to write to you personally in order to explain the circumstances that led to the recent change of government in Ghana, and to discuss some of the most crucial problems which the National Liberation Council inherited from the old regime since it assumed power on 24th February, 1966. In view of the fact that there had recently been changes of governments in a number of African States, I thought my explanation would enable you to make a correct assessment of events in Ghana and to view the military take-over in its correct perspective.

The Army and the Police Services were compelled to intervene to stem the tide of a growing communist menace in Ghana and the catastrophic deterioration of our economy. As I told the people of Ghana in my nation-wide radio and television broadcast on 28th February, “this grave step was taken because no other means was available to restore to the people of Ghana the blessings of liberty, justice, happiness and prosperity for which we all have struggled for so long”. By his arbitrary use of power, Nkrumah lost the confidence and support of the people of Ghana and in keeping with our tradition we had to remove him from power by the only means available to us.

We became convinced that the ex-President and his communist friends, not excluding his party renegades, were determined to use Ghana as a bridge-head for the dissemination of communism and subversion in Africa South of the Sahara. To achieve this, he began by systematically destroying the independence of the judiciary and the legislature. Nkrumah turned the civil service into a political instrument thus weakening its effectiveness and discipline.

We watched with dismay the destruction of our civil liberties. The cherished rights of the individual were contemptuously disregarded, and ideologies alien to our culture and traditions were imposed upon us. Trade Unions, Farmers’ organizations and the National Council of Ghana Women were all made integral wings of the banned Convention People’s Party. The press, radio and television services were all rigidly controlled and used as the mouthpiece of the ruling Party. All legitimate opposition to the old regime was ruthlessly suppressed and the people of Ghana could not even voice their grievances without running the risk of arbitrary imprisonment or detention.

Nkrumah leaned heavily towards the East and brought into the country hundreds of so-called Chinese, Russian and East German technicians and experts. We knew, however, that some Chinese experts were in fact training saboteurs in special camps to subvert other independent African States. The Russians were also using East German nationals to train the ex-President’s guard and security men. Secret arms and ammunition dumps had been built in many parts of the country by the deposed President and these were only discovered after his overthrow.

What is more, by their reckless political adventures and spurious economic theories, the deposed President and his Party drove Ghana to the brink of economic disaster and alienated the sympathy and support of our traditional friends in the West with whom we had enjoyed years of friendship and economic co-operation.

At this stage, it is not possible to make a complete assessment of the moral, intellectual and material damage which the former regime has inflicted on the people of Ghana. The National Liberation Council has fully assumed the onerous task of mentally rehabilitating our people. We on the Council are determined to make good the damage which the former President and his colleagues have created in the minds of our young people. We are determined to remove all traces of alien ideological influence from our country and improve relations with our traditional Western friends, among whom we count the people of the United States. We plan to re-educate the youth of Ghana and wean them from the pernicious ideologies with which their minds have been tainted. All these appear formidable for the new regime, but what is even more formidable, Mr. President, is the critical state of our economy.

When the National Liberation Council took over the administration of the country, the economy was in a very chaotic state, mainly as the result of gross mismanagement and unbridled spending of public funds on prestige projects of doubtful value. Ghana’s balance of payments is in serious deficit, essential commodities are in short supply and inflationary pressures are mounting by leaps and bounds, while unemployment figures keep on rising. In the face of these difficulties, we are being called upon to meet some of our most urgent overseas payments within the next few weeks.

The Economic Committee of the National Liberation Council is formulating realistic plans to stabilize the economy. This calls for a drastic re-examination of several projects with a view to eliminating those that are not economically viable. The Committee is also making contacts with friendly countries from the West, the United Nations, the Economic Commission for Africa and the International Monetary Fund for assistance. These will, however, entail some protracted negotiations, but something will have to be done immediately to improve our foreign exchange position, thus enabling us to make immediate payments for essential imports.

If we fail to take immediate steps to meet this emergency, Ghana will be plunged into an acute economic crisis of catastrophic proportions. To aggravate this ominous situation, we are also threatened with a famine within the next few months. Should this situation continue unchecked all our efforts to salvage the country’s economy will be nullified and the hopes of millions of Ghanaians for a happier and brighter future obliterated.

To tide us over the critical weeks that lie ahead, the National Liberation Council has appealed to your great country, Mr. President, for aid and food, and I do earnestly hope that your response will be swift and substantial. Furthermore, it is my hope that we will establish a line of credit with the United States as soon as possible. While we look to our friends for whatever help they can give us, we are working hard with our very limited resources to ensure the survival of our economy.

If the National Liberation Council succeeds to arrest this economic disaster, the people of Ghana will be convinced that they have been ushered into a new era, bright with prospects for a better life. The Council will also have the satisfaction of achieving their objective of restoring to Ghana democracy, the rule of law and economic sanity.

The Council will thus hand over the administration, at the appropriate time, to a civilian government. As I said in my recent broadcast, “the Armed Forces and the Police who put their lives at stake to bring about this long-awaited change from Nkrumah’s oppressive regime to a democratic form of Government have no ambition what-so-ever to rule this country indefinitely.” In due course a Constitutional Reform Commission will be set up to produce a Draft Constitution acceptable to all sections of our people and their recommendations presented to the nation for adoption at a referendum. We will also re-introduce the separation of powers of the legislature, the judiciary and the executive which Nkrumah and his Party wantonly destroyed.

We know that a strong, viable and democratic Ghana will exert great influence in the councils of Africa and the world. The people of Ghana are determined to turn to their friends in the West. We are conscious of the goodwill and sympathy of the American people with whom we desire to maintain a close and warm friendship. As a developing country, our main pre-occupation is to build our nation as you have built yours since your independence.

You can depend on me, my Government and the people of Ghana to support your democratic principles and your way of life. As a great Power, we know you do not want us to play the role of a puppet state, but at least following your example, we can re-educate our children to admire the glories of real democracy. To be able to do this, we definitely need your help and encouragement.

I look forward to keeping you informed personally of developments in Ghana from time to time and to hearing from you. I hope that it will be possible in the near future to meet you, exchange views and benefit from your ripe and varied experience.

Accept, Mr. President, the assurances of my highest consideration.