Tales of a living legend - the Osagyefo of all times 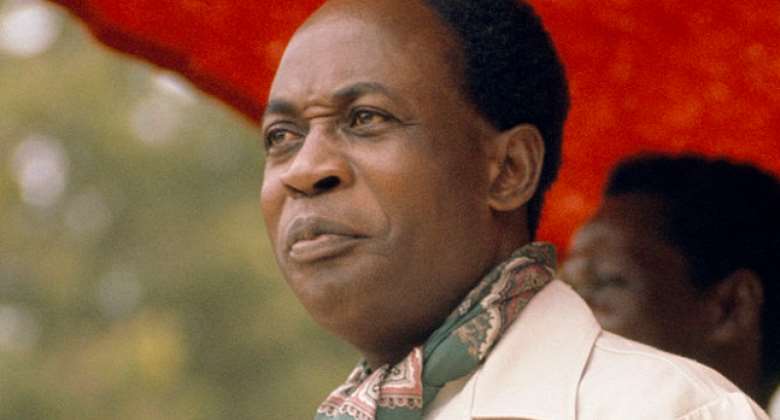 A man of his words. Born with worth on the 21 September, 1909, at Nkroful in the Western Region of Gold Coast (modern-day Ghana). Accomplished his mission on earth on 27 April,1972 (62 years on earth) in Bucharest, Romania.

The powerful brain behind the formation of the Convention People's Party (1949–1966) after breaking away from the United Gold Coast Convention (1947–1949). Ousted in a coup led by Gen. Afrifa and Kotoka in 1966 that brought to an end the first Republic.

A Pan-Africanist who united the entire Africa and waged a bandwagon that led to Africa boycotting the 1966 World cup over unfair treatment (Africa, Oceania and Asia were asked to compete for only a single slot). He will later organize the West Africa Football Cup in 1959 and birth the Ghana Black Stars in the same year in history. A treasure to cherish.

It is or should be said that on the 6th of March, out of a task that was daunting and might, this man with great valour descended words like thundercloud from mars:” At long last, the battle has ended! And thus, Ghana your beloved country is free forever!”

Yeah yeah! That was the eloquent and enthusiastic voice of my gallant first president. And worth as it was, the crowd with eyes widely opened cheered, hurray! Yes, it was a clean break and our country was given the long rope to think – free and build bridges again without looking neither East nor West but forward.

Infact, our forbearers led by transformational Nkrumah haven’t fought and won the battle as expected. They were confronted with the challenges of independence which in itself was a novelty, but were never overwhelmed by that fact and hence did more than Napoleon to avoid any penalties therefrom by taking useful steps to lay the foundation of our dear country.

This was visible in the massive industrialization. Indeed, the country was very young, but their vision for the infant rare noun (Ghana) was long and we don’t need to go any yonder to find the burden of that vision. It was a vision far beyond just political freedom. A vision of hope and transformation.

And as birds of passage at the mercy of the creator’s say, are now eternally away! Several years down the lane, the baton has been handed over to successive crop of leaders to continue the leadership marathon race by intensifying the political freedom so anchored with extensions in economic freedom, financial freedom, freedom of the mind ad infinitum.

Let's start reflecting on the truth:

After many decades of independence, have those so entrusted with power continued the vision, ideas, policies and transformational agenda of the founder? Have we felt Ghana so envisioned or it is best reflected in mere speeches?

Have our trustees led us in trust to reshape our destiny as a country through functional policy directions to justifiably pride ourselves as the beacon of democracy in Africa, and for that matter, the first African country South the Sahara to gain independence?

Guided by our present condition and consciousness, should our political independence provide a cause to celebrate the gains or a recourse to reflect again and think about our collective failures towards a change? Well, your answers might just be right as mine.

Several decades after independence,we are in the midst of abundance and should be reflecting towards liberating our people from the clutches of unjustified poverty, diseases and hunger. It is an error of grace to allow ourselves to be constantly compelled by our visionless leaders of today to atone for mediocrity or what Dr Mensah Otabil refers to as “Ordinariness.”

We have over the years planted history wrongly in the minds of the innocent generation.

Countrymen as Dr. Kwame Nkrumah of all times will put it, I humbly submit that it’s a point of reflection and change when after so many decades of independence, and with all the minerals, cocoa, oil, water, power and fertile lands, the masses are still enslaved in unbridled poverty with little or no access to education and basic health care.

When our educational system is still highly colonial in nature. Or is it the case of what Nkrumah said which I have slightly modified, “Ghana is a paradox which illustrates and highlights neocolonialism.

Her earth is rich in natural resources, yet the products that come from above and below the soil continue to enrich, not Ghanaians predominantly, but the west or groups and individuals who work to Ghana’s impoverishment”.

Imagine this blank truth: after these many years, we feel very proud and content to kneel before the very people we boldly told in the face,” the black man is capable of managing his own affairs! for aid?

These words were meant with action from the founding fathers but we long lost the vision and reaction, and surprisingly are not learning any lessons. As if he knew, Nkrumah rightly warned us against dependence on capitalist global institutions such as UNO and the Breton Woods institutions such as IMF and World Bank. But a stubborn child is always a stubborn child and will not hearken to wise counsel. Such a child is like the prodigal son who after lavishing all his due in wild living would have to bow his head down in shame and return to where he had known for forgiveness and support.

Today, our highly revered security have adopted the habit of aiming at unarmed civilians and shooting to death in a shameful bid to satisfy unseen political hands. Citizens killed and maimed with impunity for clueless leaders to assume the reigns of power. What a pity!

Agriculture which happens to be our backbone and major informal sector employer is reported to be on the verge of collapse by the World Bank. This should be a cause for reflection and change not celebration.

Countrymen,this is our current state and an honest assessment of our individual and collective situation will reveal shame. But I can clearly state without equivocating, that there is still hope for my country no matter the circumstances. And that hope is you and must be reborn on common sense revolution and national reconstruction. We must think again and reap the gain! Let us together as a country, put our best foot forward and scrape the transformation agenda together. Let us whistle in the night with eyes wide open. We can’t be comfortably glorifying mediocrity year – in – year out. It’s an error!It is equally an error to claim to have leaders when the masses are ironically “laughing”.

It doesn’t happen that way.

Ghana was born in me and I explore you at this point to join hands let's celebrate the life of a living hero - Dr Kwame Nkrumah, who never dies. We must draw useful lessons from his selfless life and leadership story.

I love my country and challenge you at this point in history to stay awake and say: We will not sleep anymore! No more blind politics. The development we must get. The poverty we must not.

I hope you read and appreciate this piece like a Ghanaian(statesman) and not a politician.

May God bless our homeland Ghana and make us great and strong to build a better nation.