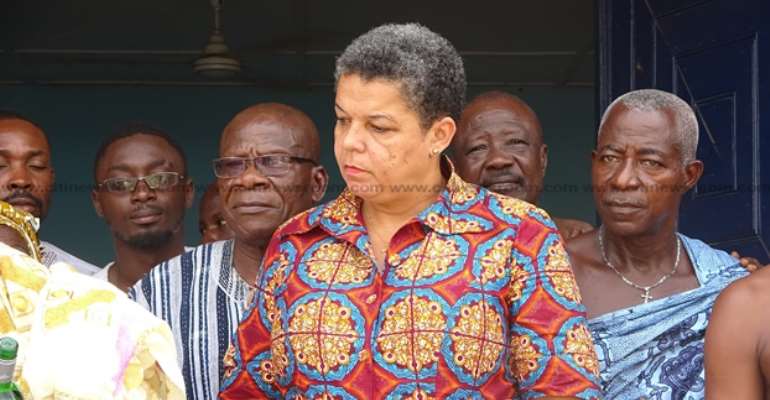 On Friday, 15th September, 2021, two NDC branch executives at Nyarkokwaa in the Awutu Senya West Constituency fought over an amount of ¢600.00 which led to the hospitalisation of one of them, after sustaining deep knife wounds.

Facts gathered on this assault case are that, Hon. Gizella Tetteh-Agbotui, the Member of Parliament for Awutu Senya West Constituency, gave an amount of ¢600.00 to her branch executives at Nyarkokwaa to share for the work they did in the 2020 elections. However, Emmanuel Kwame Lartey, NDC branch secretary at Nyarkowaa spent the money alone.

As concerned constituents of Awutu Senya West Constituency, we have been waiting for Hon. Gizella Tetteh-Agbotui to issue a statement to condemn Emmanuel Kwame Lartey and advise all the youth in the constituency to abhor such irresponsible, greedy inspired criminal act but that has not yet happened.

To the shock of reasonable constituents, Hon. Gizella Tetteh-Agbotui who visited the hospitalised victim, whom we have all been praying for to survive, also visited the alleged criminal who is currently in police custody. Why the shock because it is a good thing to visit them, especially the hospitalised guy? That is true but we find it worrying for the Gizella led NDC delegation to call for out of court settlement, looking at the nature of the case.

What makes the NDC's decision on this case wrong and politically irresponsible is not far fetched. This criminal incident happened a few days after John Dramani Mahama called on his party members to risk everything at the polling stations in 2024 to ensure that their party wins the next general elections. Many Ghanaians perceived John Dramani Mahama's "Do or Die" comment as a call for violence among fanatical party supporters at the grassroots level.

If after such incisive comments by John Dramani Mahama, NDC party executive at the branch level would greedily spend money that does not belong to him alone and master the courage to inflict his colleague with knife injuries, the matter must be taken seriously by the state. It will therefore not just be wrong, but also irresponsible for anybody at all to suggest that such a matter should be settled out of court.

To prevent a situation where party hooligans think they can hide behind unthoughtful political comments by their political heroes to commit crimes with impunity, I would want to appeal to the office of the Attorney General to show keen interest in this matter.

It has always been the case that some politicians take advantage of the poor Ghanaian to selfishly do things in a manner that favour them. I am therefore highly suspicious that the family of the victim may be financially induced to accept that the case be settled out of court but if this happens, it would encourage more NDC youth to take inspiration from Mr Mahama's "Do or Die" comment to perpetrate more violence in the Awutu Senya West Constituency.

From another angle, I would want to commend the NPP youth activists in the Awutu Senya West Constituency for acting responsibly since this incident occurred. Looking at the sort of noise and poor political communication being executed by the NDC youth in the Awutu Senya West Constituency, they would have accused Nenyi George Andah of trapping his party members with ritual monies. However, showing that they are more matured and respectful, the NPP youth activists have spared Hon. Gizella Tetteh-Agbotui of this dirty politics.

Concluding with emphasis, I would want to reiterate that the Attorney General's office should not allow Hon. Gizella Tetteh-Agbotui and her NDC succeed in getting this case out of court since that would encourage more "Do or Die" related violence among the NDC "Do or Die" soldiers.