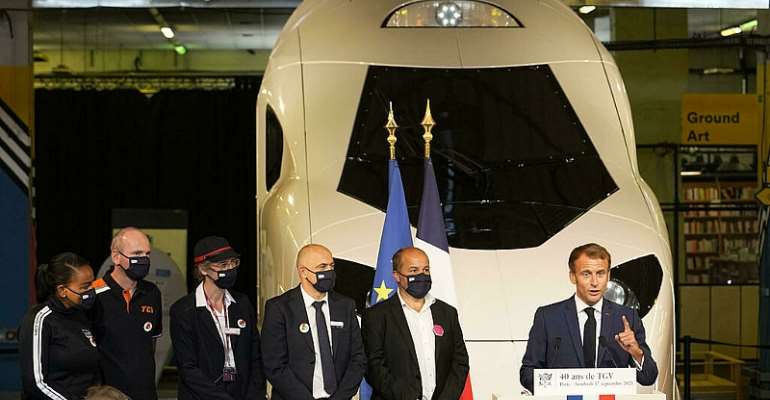 French President Emmanuel Macron on Friday unveiled a mock-up of the next generation of greener super high-speed trains, known in France as TGVs — four decades after the first TGV was launched. But will new trains be enough to keep the SNCF, France's state-owned railway company, on track?

“This decade for the TGV will be about innovation," Macron said, adding that France must “respond to the challenge of moving around by emitting less and promoting new energy forms.”

Macron spoke in front of a full-scale model of the new TGV M. It will carry more passengers — 740 compared to the current train's 600 — and is planned to enter service in 2024. It will also use one fifth less electricity than the current model, while maintaining its top speed of 320 kilometers per hour.

The ceremony took place 40 years after another French president, François Mitterrand, launched his bold new gamble in technology at the same station — the first TGV, or “Train a Grande Vitesse” ("High Speed Train").

With a line speed of over 270 km/h, according to France's SNCF railway company, that train went on to change the face of modern train travel. It has since been emulated around the world, including recently in the U.K.'s highly anticipated HS2 project.

Macron's government has promised 6.5 billion euros in new investments this year to expand high-speed train lines, and boosting train use has been part of his government's strategy to reduce emissions.

Privatisation
But there's a more pressing reason to modernise as well: privatisation. According to a statement by the SNCF, in the 2000s, the markets for freight and international passenger travel opened up to competition. More recently, regional and long-distance passenger rail (high-speed service and Intercities) are following.

According to the SNCF, France officially opened its passenger railway system to competition by private enterprises in December 2019, when bidding started, and as of December 2023, the French state actors are required to put bids itself as well and the entire national rail network, except for certain suburban RER links, will be open to  EU-wide competition.

Earlier this month the Marseille-Nice line became the first to be operated by a private entity - Transdev, a French company headquartered in Issy-les-Moulineaux - instead of the SNCF.

Feeling the pressure, SNCF's CEO, Jean-Pierre Farandou, told BFM TV that the group will suppress between 2,000 and 3,000 positions, or 1.5% to 2% of its total workforce.

The railways were already in trouble as a result of a series of strikes at the end of 2019 and the beginning of 2020, which paralised train traffic, and the consequent lockdown of France as a result of the Covid-19 pandemic, which largely reduced the amount of travellers.