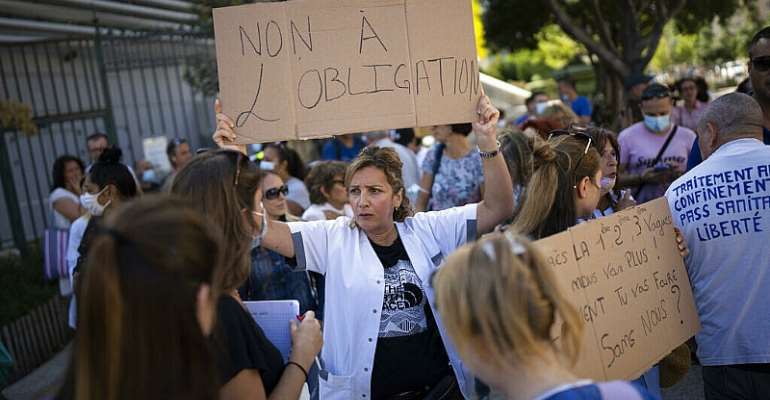 Some 3,000 health workers across France have been suspended without pay for failing to get vaccinated against Covid-19, Health Minister Olivier Veran has said.

In line with a new rule which came into force on Wednesday, France's 2.7 million health, care home and fire service and ambulance workers must have had at least a first dose, unless they had a valid reason to be exempted.

Veran said 3,000 employees at health centres and clinics who had not yet been vaccinated had been notified on Wednesday.

However, "a large number of these suspensions are only temporary" he said, with many agreeing to get jabbed because “they see the vaccination mandate is a reality".

Those suspended were mainly support staff, with "very few nurses" among those told to stay home, he told RTL radio.

France's national public health agency estimated last week that roughly 12 percent of hospital staff and around six percent of doctors in private practices have yet to be vaccinated, meaning at least 270,000 staff at at risk of being suspended.

In the Paris hospitals group (AP-HP), vaccination rates are high and only 5 percent have not received a first dose.

"In Paris, we did a lot of work explaining [the importance of vaccination] to staff," emergency services doctor Patrick Pelloux told RFI.

But in some other cities the non-vaccinated figures are higher, leading to concern over disruption to health services.

In just one hospital in the southern city of Nice, 450 hospital staff have been suspended, according to local press reports.

“Services would have to be closed down,” he said.
In Montélimar, also in the south, one hospital told AFP it had begun cancelling non-urgent operations because of a shortage of vaccinated anaesthetists.

A video from Strasbourg posted to Twitter showed firefighters taking off their helmets and health workers their white coats in protest at staff being suspended on the back of staff shortages.

Health Minister Veran said "the continuity of care and quality of care were maintained yesterday in all hospitals and medico-social facilities,” although some services such as scans were halted for a few hours.

Veran admitted “a few dozen" staff had resigned rather than sign up for the jabs.

"We have chronic staff shortages and it's difficult to find trained care workers who will stay. We're going to lose colleagues that we desperately need to look after our patients and do our jobs."