Of "Changfangs" And The Rest Of Us! 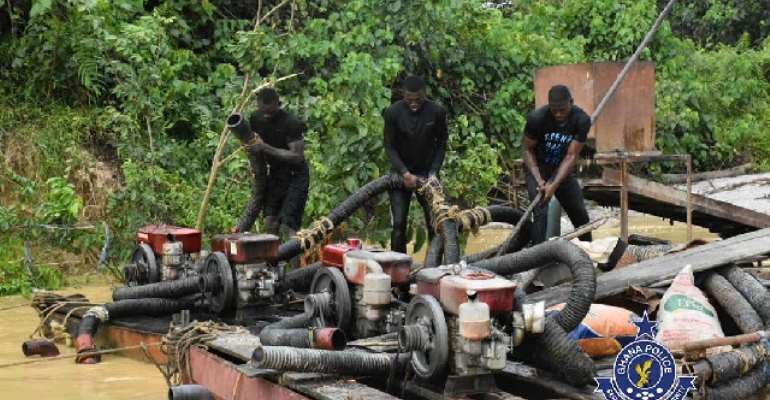 Writing is one of the most lonely undertakings in the world.

Indeed, if one writes constantly, one thereby involuntarily inters part of one's personality.

I am afraid Ghana is a place where if one writes constantly about matters that concern one's entire community, or even one's Planet – instead of participating in the superficial discourse on personalities and transient political issues – one is gladly derided for making some “abstruse” matter one's “issue”!

I was alerted to this phenomenon by the late Dr Doris Yaa Korantenmaa Dartey, who sadly passed on 19 July 2020. She was a former chairperson of the Graphic Communications Group Limited.

Another fine lady journalist, Ajoa Yeboah-Afari, was present when Dr Dartey made the “serious joke” to me about the “yourissue” paradigm in current Ghanaian journalism.

She was quite right. Look at this: the other day I wrote a piece about the warning the United Nations had issued about how the world's continued use of fossil fuels was creating climate change so rapidly and to such a huge extent that if humanity did not change its ways, the Earth would be uninhabitable a few decades hence. It may in fact be too late already to save the Planet from the fires and floods we watch on TV so often these days.

Do you know what some clever Ghanaian found time and wifi space to write as his comment on the article?

“You've said it before, dear sir. But Galamsey 'cartels in your back yard is (sic) destroying the relatively virgin environment of ours”. UNQUOTE

Do you note the sarcasm? And how he personalises the issue by using the term “you” twice in one line? Yes, it's my “issue” and I should not continue boring him with it, right? I wonder, in fact, why he bothered to read it? Ah – maybe he wanted to construct a dart out of my prose to stab me in the heart with it? Such enforced

introspection does not help any writer, no matter how used he manages to get to it.

Ahem!Just imagine my joy, then, when, a few days later, my attention was drawn to an article written by that superb Columnist, Ajoa Yeboah-Afari (former editor of The Ghanaian Times):

QUOTE: “GALAMSEY PLAGUE: TIME FOR COMMUNITIES TO FIGHT BACK BOLDLY”!UNQUOTE

She was forthright: “Wouldn’t it have been phenomenal, if the ‘♯Fix-the-Country’demonstration... had included a commitment from the group of some practical actionsto help solve the problems they listed?...(Ajoa asked).

She went on: “...If their protest on August 4 [2021] Founders’ Day, was non-political, not intended to score political points, why can’t they join hands with the Government to fix the problems?...w

Now this was real bravery. To assign “political motives” to people who project themselves as “objective” intellectuals who are using “academic” methods to “fix” the country's problems?

But Ajoa fears no foe: “One well-known problem confronting the country that immediately comes to mind is illegal gold mining, or, galamsey.....”, she specified. Oh? She was entering “issue” territory, wasn't she? Galamsey? Everyone knows it is destroying the country. But so what? Why make an issue of it? After all, the people engaged in it “merely want to earn a living,” don't they? It's like... like those fellas at Kasoa and elsewhere who engage in armed robbery because they want to “earn a living”, isn't it? Yes!

“Interestingly,” Ajoa observed with her disconcertingly sharp eye: “one of the demonstration placards read: “Galamsey is unpatriotic behaviour”, meaning that theyidentify with the urgency of ending that persistent vexation!...

“Conceivably, an offer by the protestors to help fix, for a start, the galamseyscourge would have underscored their patriotism – and good faith. Summing up the gravity of the peril, a commentator, cited below, put it this way: “Ghana is on the edge of a precipice”.

‘Wateris life’ says it all.

“Yet, the illegal miners seem deaf and blind to the adverse effect of their activities, through the chemicals they use, on the suffering communities as well as on the rest of the country. Obviously, when water sources are contaminated, more moneyis needed to purify the water and that, naturally, means more demands on taxpayers.

“Notably, an article in the August 17 issue of the Daily Dispatch,by A.S. Tetteh, coincided with the circulation on social media platforms of a series of highly disturbing pictures of the current completely polluted state of one of Ghana’s prime water bodies, River Ankobra.

“My interest in the pictures was also sparked by a line-up of some machinery on the Ankobra, which appeared to be the equipment known as Changfangs.....

“Changfangmotors are floating contraptions used by galamsey operators to wash the ore, during mining. [They] contribute to the high pollution of water bodies in the desperate search for gold....

“I had associated Changfangs with Chinese illegal miners. Indeed, the word ‘changfang’ does sound Chinese! And now it emerges that the machines, or some, are actually manufactured in Ghana! [EMPHASIS ADDED]

“Why then has it taken the Government so long to ban their manufacture locally?” (Ajoa asked. ) Was she not frightened of being accused of impertinence? Surely, the Government chooses to act when it feels like doing so, doesn't it? So changfangs continued to be manufactured locally after their importation was banned, so what? The Government had now realised that that was wrong and rectified its mistake, hadn't it? As for “these” journalists! Instead of congratulating the Government, they were making snide remarks about its laudable action!

Ajoa next quoted some more of Mr. Tetteh’s article, published before the ban [on Changfangs] was announced:

.... “The technological shift, from the use simple tools like pans for alluvial mining, to the mounting of Changfangs on river bodies, [Mr Tetteh pointed out] “has occasioned a rate of destruction of flora and fauna which far exceeds the rate of success of past and present anti-illegal mining interventions.

“According to the Water Resource Commission, illegal mining activities have resulted in the pollution of 60 per cent of all water bodies in Ghana. Projections based on current trends also point to acute water shortage in the foreseeable future, which will compel the country to import water by 2030 .

“These statistics are grim. Never has the urgency to act and actdecisively become more critical for the collective survival of Ghanaians than now. In February this year,[2021] the government launched another intervention dubbed ‘Operation Halt’,which has shown prospects of success, due to the application of what some consider to be draconian measures, including the burning of mining equipment on site....

“However, the Operation Halt success is limited in the extent it can go to ensure a total eradication of the illegal mining menace, as it is designed to factor in, the infeasible plan of permanently deploying military personnel to guard all river bodies in the country.”

Here, I, Cameron, would like to interject a question: “Yes, Mr Tetteh, I agree that the Government cannot permanently deploy military personnel “to guard all river bodies in the country.” But can't the Government make it extremely expensive for the galamseyers to continue their operations. We know we have “porous borders” through which goods can be smuggled into Ghana. But ever since colonial days, hasn't the Government endeavoured to detect smugglers and make them pay a painful price? By way of huge fines; the seizure of contraband goods and the imprisonment of smugglers?

But I won't belabour the point because the rest of the discourse goes like this: “Perhaps the time is right for the implementation of other measures which include, but are not limited to, the ban on the importation or manufacture of changfang machines. Failure to adhere to such measures should attract severe punishment, either in the form of a hefty fine or a jail term.”

[Cameron's concluding Comment: Mr Tetteh, please are you of the mandatory sentences laid down for local and foreign galamseyers by the Minerals and Mining Amendment Act 2019, Act 995”?]

Finally, here is how Ajoa appended her own “view” to the problems of solving the galamsey menace: “Following the changfang ban, there are two more facets of the galamsey plague to be tackled. Firstly, there is [an] urgent need to assist the galamsey cohorts to find an alternative source of income.

“Secondly, it’s not only moral support that is needed to defeat the menace but, equally important, there has to be a sustained, bold, fightback by the affected communities. Traditional rulers, opinion leaders, men and women; the youth, all need to see the fight against galamsey as their fight, principally, not a Government fight.

“After all, they are eye-witnesses to the destruction of water bodies and attendant harmful effects on their own lives. They are the immediatevictims, so they must be encouraged and empowered to join in the offensive against galamsey, or scale up their resistance; fight as if their lives depend on it.”

I say AAAAMEN! to all that! But I would like to remind Ajoa that as regards “alternative sources of income,” the Government DID expend a lot of money, in 2018, to “train” illegal miners in safe AND EFFICIENT mining practices, at the Tarkwa University of Mines.

Apart from paying allowances to “small-scale miners” who attended the course, the Government granted them licences to apply for “concessions” on which to mine. However, MOST of them immediately sold their “permits” to affluent and/or politically strong “galamsey entrepreneurs”!

And we got back to Square One. Today, Operation Halt, despite its successes, is being “modified” again! If we are not careful, we shall be back to “Square-One-Minus-One”!

13 Nigerians who engaged Police in gun battle at Weija reman...
37 minutes ago