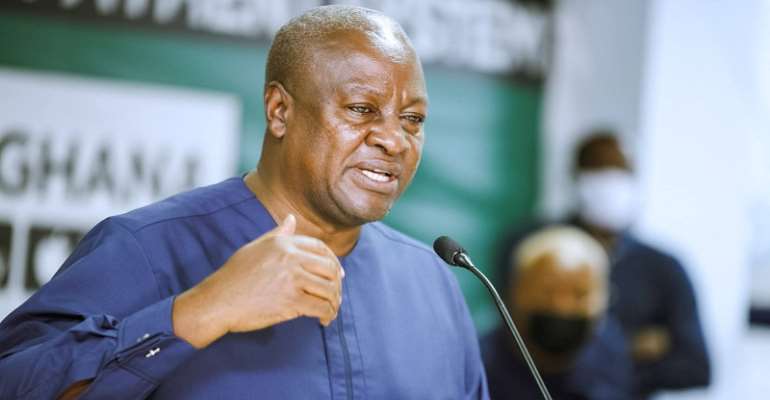 I hate pessimists because they possess evil and devilish can-not-do spirits. They break hearts and lower the morale of people who aspire to do good things for society. They are like cowards who die many times before their deaths. Nations are not built with people with can-not-do sentimentality. The best thing to do is to leave them behind as we trudge on towards our desired goes.

I always insist that Mr. John Dramani Mahama is not a good historian. He doesn't look back like the way historians do so he always fumbles and makes a mockery of himself. Historians do not fumble because when they look back, they see what went wrong before taking a step forward. In the run-up to the 2008 general election, then candidate John Agyekum Kufuor told Ghanaians that when he held the reins of power, he will abolish the Cash and Carry system of health delivery in the country. His argument was that because people could not get cash to access basic health care, many die. Because in politics you do not place all your cards on the table, Mr. Kufuor did not tell Ghanaians how he was going to abolish the deadly Cash and Carry system of health delivery.

When the message caught on well with Ghanaians, then candidate Atta Mills (now of blessed memory) went to Wa in the Upper West Region during the electioneering campaign and told his gullible listeners that what Mr. Kufuor told Ghanaians was a gimmick and a political talk because no one could abolish the Cash and Carry system which Ghanaians had lived with for close to twenty years. He received a loud ovation amidst the shouting of “Eye Zu, Eye Za NDC party slogan. In fact, he did not end there. He also told supporters of the NDC in Cape Coast in the Central region that Ghanaians should be weary of politicians who come promising juicy ideas like the Cash and Carry system of health delivery because the country is not in a position financially to carry the bill. He admonished politicians not to take the electorate for granted.

In the heat of the 2008 general election when the NPP used the NHIS as a campaign tool, the NDC became so jittery that they were lost in words as to how to attack the NHIS. Mr. Mahama as running mate to Prof. Mills went to Techiman in the then Brong Ahafo Region to tell them on a local FM station, ASTA FM, that Mr. Kufuor and his NPP government did not plan the NHIS well and that when the NDC came to power, they will rather introduce a one-time premium since some people could not get money every year to renew their premium. Many voters, especially, the poor who live in the rural areas believed in Mr. Mahama and voted for them. That was the mistake they did. They were seriously misled by a politician seeking for power.

For the eight years that the NDC took over power, the promise of a one-time premium became a mirage and the NHIS itself came tumbling down. Service providers were not paid and Ghanaians found themselves paying for their medical bills in some health facilities who refused to accept NHIS cards. Cash and Carry was back. The one-time premium played a meaningful role in the disgraceful defeat of Mr. Mahama in the2016 presidential election. Ghanaians are not fools. The issue of one-time premium is still an albatross hanging on the neck of Mr. John Dramani Mahama, the accomplished loser. If Mr. Mahama has any shame in his lexicon, he will never mention any one-time premium in this country. If he thinks he was able to take Ghanaians for a ride, he must think again because Ghanaians are not shortsighted as he told us some time ago.

The evil and devilish spirit of can-not-do again came staring us in the face in 2012 when candidate Nana Addo Dankwa Akufo Addo repeated his promise in 2008 that he will introduce a free Senior High School when voted to power. Once again doubtful Mahama jumped on the shoulders of Mr. Akufo-Addo, calling him a liar who wants to lie his way to power. He said Nana Akufo-Addo was desperate for power, hence his penchant for making unachievable promises to Ghanaians. NDC communicators took the battle against free SHS to a different level with some saying a free SHS will become possible in twenty years' time. Okudjato Ablakwa told us that in a matter of five years the free SHS will collapse. Five years have come and gone and we are still waiting for the collapse of the live-saving initiative. And this is an honorable Member of Parliament!

When the free SHS rolled out nine months after the coming into power of the Akufo-Addo-led administration, John Mahama and his team of naysayers changed gear and also changed their swansong. They started doubting where the government will get money to finance the project barely a year of the takeoff. For two years, their focus was on how the project will be financed. On the third year when intake had rocketed, the naysayers, led by Mr. Mahama shifted gears and started attacking the Double Track system introduced to curb the influx of students. Mr. Mahama sarcastically called it 'traffic light system of education'. As school blocks and dormitories started sprouting up in all the districts to accommodate the students, they have now back paddled, recoiled into their shelves and kept mute.

Today these shameless NDC apparatchiks have regrouped and have started the mischief again. The President promised to build one hundred and eleven hospitals in some districts and that too has been met with attacks as if he is going to build all the hospitals in Kyebi, the President's home town. Unknown to Mr. Mahama and his people, the President had set up a team to work on the areas where the hospitals are to be built. The Ministry of Local Government and Rural Development had facilitated the acquisition of lands and other documentations and sources of financing the projects have been secured. Now the NDC is asking for the government to publish the names of the contractors who will execute the projects. Habba!

Where I come from, when people start to behave like the way John Mahama and the NDC are doing, our elders hire exorcists to deliver them from evil spirits. I really don't know what Mr. Mahama wants from Ghanaians. You have been a President before and you want to come back to power again which is your right. Someone else is in power and trying his best to develop the country so that when you come back to power you will only need to continue from where he ended and you say La! Is that how to build a nation?

The late Fidel Castro of Cuba is my role model when it comes to cigar smoking. At eighty five years old, he was puffing ten sticks of his custom made Havana cigar a day. I smoke five cigars a day and that is not enough particularly, when the rains are falling. Don't mind me while I pollute the air with a stick of Churchill.

13 Nigerians who engaged Police in gun battle at Weija reman...
22 minutes ago