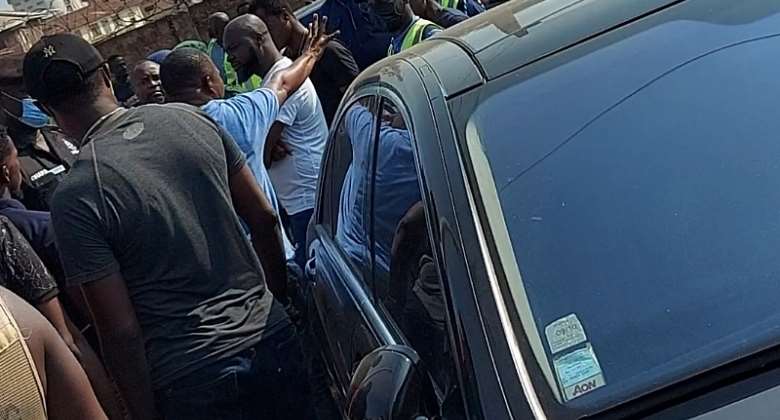 The “make Accra work again” taskforce has stormed the Kokomlemle along the Insight News Paper stretch today. The taskforce made up of the Ayawaso Central Municipal Assembly City Guards, Officials of the National Disaster Management Organisation (NADMO) and joint Police Force encountered resistance from individual Vehicle owners who parked wrongly along the stretch. Majority of them had acquired shops along the road and obviously parked along the stretch making it difficult for pedestrians’ safety and easy vehicular flow.

It is worthy of note that the Greater Accra Regional Minister, Henry Quartey wasn’t part of the team. His absence to a large extent brought about a heated argument among the taskforce and the traders which nearly led to serious brawl. As I observed from afar with my journalistic video taking technic in place, I was able to have a fair idea of agitations and counter agitations from both parties.

The argument which lasted for closed to 15minutes brought tempers very high. I saw a journalist who was taking close shot of proceedings heckled. He had to run for his dear life living his diary and pen on the floor in the process.

As I observed proceedings from afar, one thought came to mind. Can Accra work again? Obviously yes, but it will take time for people to understand the need for our capital to be stench free and less crowded. The Greater Accra Regional Minister deserves some accolades for his effort but can he alone do the job since some Ghanaians will pose as nuisance. When this insubordination continues, we can’t possibly achieve our target and all efforts will come to square zero.

I was shocked at what I saw today basically in the sense that after all, Henry Quartey had made it explicit that people shouldn’t view his action towards “Making Accra work again” through political lenses. He even opined that all strategies he has adopted to make Accra livable and safer are all aimed at improving the sanitation situation and by extension, the living conditions of residents. So, if this is anything to go by, why was the team subjected to insults and name calling?

Ghana can only develop when the politician changes his attitude but most importantly, the onus lies of the citizens to also change their attitudes. Parking indiscriminately along a stretch isn’t proper.

Let’s be law abiding citizens and Ghana will be better for all of us.

Those in secular world live better because they work hard th...
5 hours ago