Cup of Nations 'beacon of hope' for battered Cameroon economy 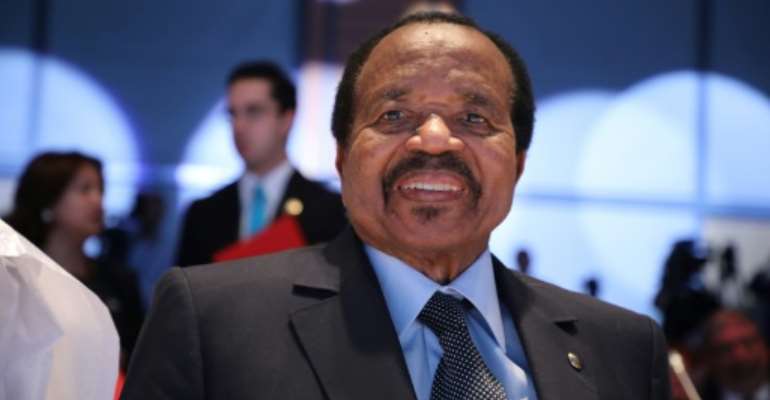 Paul Biya has been president of Cameroon since 1982 and, at 88, is the oldest head of state in Africa. By Ludovic MARIN (AFP)

The Africa Cup of Nations in January and February is a "beacon of hope" for a Cameroonian economy battered by the coronavirus pandemic and two conflicts, businessmen and traders say.

A sign of depressing times is that only a few merchants populate the once crowded aisles of a handicraft market in coastal city Douala, the economic hub of the central Africa country.

"We first had the Boko Haram crisis in the far north, then the separatist conflict in the English-speaking zone. Covid-19 has finished us," says Mouhamadou Isolha, president of the Douala craft market.

"We had very complicated months. No more visitors came. We are experiencing something unheard of," he continues.

"The CAN (Cup of Nations) can change a lot of things with the influx of tourists and spectators."

In Yaounde and Douala, the largest cities, the 24-nation biennial tournament is eagerly awaited.

Cameroonians are dreaming of an economic upturn and of success for the national team, known as the Indomitable Lions, who have been African champions five times, most recently in 2017.

The economy, which represents more than 40 percent of the GDP of the Central African Economic and Monetary Community, is the most diversified in the region.

But a third of the inhabitants live on less than two euros a day, and the poverty rate is almost 40 percent.

Covid-19 has lowered public and private investment and consumption. According to the World Bank, the worst affected sectors include hotels, restaurants and transport.

Francoise Puene, chief executive of a Yaounde hotel, told AFP: "For us, the CAN is the light at the end of the tunnel.

"We have invested 12 billion francs ($21 million/18 million euros) in the future," she says as expansion work continues at the four-star establishment.

"With Boko Haram and the Anglophone crisis, they now have the feeling that everything can change at any time. I hope the CAN will give tourists the desire to come back to Cameroon."

But economist Dieudonne Essomba believes the "CAN cannot have a strong macroeconomic effect".

"The stadiums are prestigious investments, but do not have a structural impact on the lives of the people," he told AFP. "The average Cameroonian needs water, a job, access to healthcare."

Jean-Michel Nintcheu from the opposition Social Democratic Front party criticised the government of President Paul Biya for creating "a vicious debt" by choosing to host the Cup of Nations.

"We are talking about more than 3,000 billion CFA already granted for this event," he told AFP, a figure the government has not confirmed.

"We could have used part of this money to support economic operators, build hospitals and schools, invest heavily in agriculture, boost agribusiness and strengthen the supply of (electricity)," he said.

The draw for the tournament takes place in the country on Tuesday.