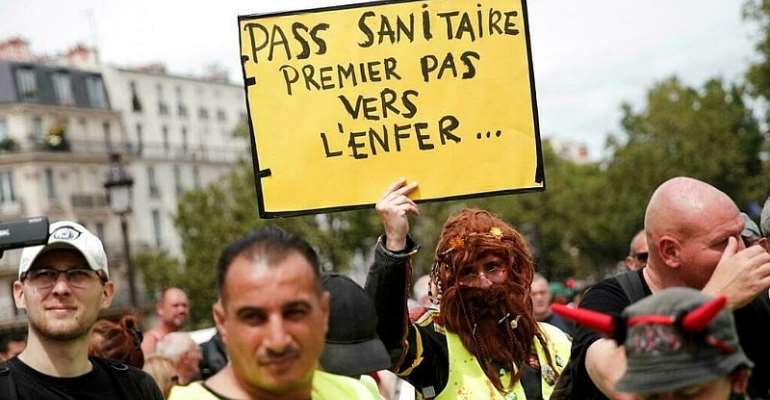 Demonstrations against the health pass brought together more than 15,000 people in the south of France in the cities of Marseille, Nice and Montpellier, to cries of "Freedom, Freedom", while protesters in Paris clashed with police.

French anti-riot police fired teargas as clashes broke out during protests in central Paris against COVID-19 curbs and vaccination.

Marseilles protests
In Marseille, a procession of 4,300 people marched through the centre of the city, filling a good half of the Canebière.  "Marseillaises" were sung under tricolour flags and banners calling for the respect of freedom of conscience - "Freedom is not injected", "We are not ready for slavery" or "Freedom is immune to your ideas", some of the banners proclaimed.

"I'm 18, I've just passed my baccalaureate and I haven't had time to be vaccinated. I couldn't celebrate my 17th birthday because of Covid and now I feel excluded again," says Moevai Barati.

"I will not take the injection," says Sandra, a 49-year-old nurse who refuses to give her name: "So I will have to look for another job. My life plan is changed but I will go through with it."

"Our country is becoming totalitarian", said Jean-Claude Dib, 71, a retired lorry driver who said he was "ready to fight back".

In the procession, other demonstrators held up signs questioning the safety of vaccines: "Neither guinea pigs, nor pariahs", "Our children's bodies handed over to the labs, do you say yes?

Nice demonstrations
In Nice, a procession of 6,000 people caused huge traffic jams in the centre and on the Promenade des Anglais in the early afternoon.

The marchers included anti-vaccine campaigners, so-called 'Yellow Vests' and opponents of Emmanuel Macron, all of whom marched under the same slogan: "Freedom".

'Health dictatorship'
Finally, in Montpellier, 5,000 demonstrators took over the Place de la Comédie to cries of "Freedom" and "down with the health dictatorship", before marching through the city centre.

"It is our freedoms that are being attacked under the guise of a health crisis," Yasmine Tellier, a 42-year-old nurse, who is vaccinated but militant for the right for each person to decide whether or not to be vaccinated, said.

"Health care workers are being singled out for vindication (...) even though they are the ones who were at the front when the Macronists showed themselves incapable of managing this crisis," says Amin, a 24-year-old medical student who prefers not to mention his name.

"Politicians are increasingly disconnected from people's lives: they don't listen to the people grumbling," comments Gilles Fernandez, a 37-year-old worker who wears a yellow waistcoat.