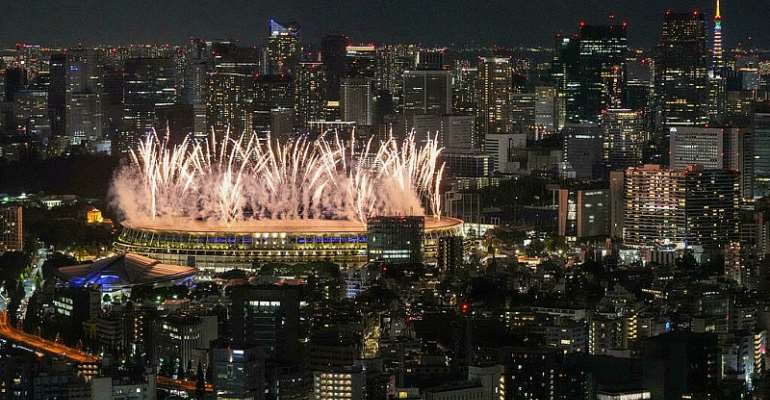 The much-delayed Tokyo Olympic Games finally got under way on Friday under heavy restrictions following a year of uncertainty.

Only about 1,000 people were on hand to fill the stands of the 68,000-seat stadium for the opening ceremony, where pink fireworks burst into the air after a countdown.

It had been five years since the Olympic flame was handed over to Japan by Brazil at the end of Rio 2016.

This year's opening parade took place before 200 officials and dignitaries, including Japan's Emperor Naruhito, US First Lady Jill Biden and French President Emmanuel Macron, whose country will host the next Games in 2024.

While some 5,700 athletes joined in, others chose to skip the event because of early competitions the next day, or to avoid risk of exposure to the coronavirus.

Socially distanced parade
This parade differs from most others because the nations were spaced out – a nod to social distancing.

As per Olympic tradition, Greece entered first, followed by the Refugee Olympic team. Other countries were slotted by their order in the Japanese alphabet.

Moments before the parade set off, a wooden set of Olympic rings was displayed at the center of the stadium in a nod to the 1964 Tokyo Games.

There, athletes from around the world were asked to bring seeds that could be planted and become trees.

Contagion fears
The Olympics have faced opposition in Japan over fears the global gathering of 11,000 athletes could trigger a super-spreader event.

Organisers have put strict virus measures in place, banning overseas fans for the first time ever, and keeping domestic spectators out of all but a handful of venues.

Polls have consistently found a majority of Japanese are against the Games, with opinion ranging from weary indifference to outright hostility.