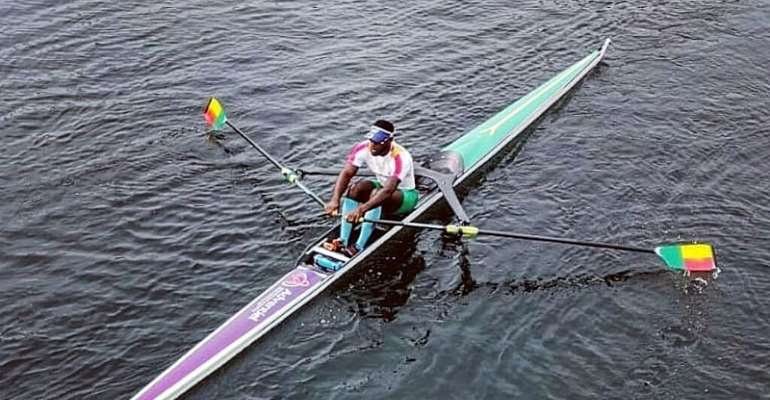 The most popular sports in Benin are football, basketball, or even bowls. No one thought Benin had a chance at the 2021 Olympic Games. Privel Hinkati has proven them wrong.

In Benin, rowing is not a top-tier sport, so when Hinkati qualified for the 2021 Tokyo Olympic Games, he had to explain to his fellow citizens what the sport is all about.

“I'm proud to be the first Beninese to qualify for the Olympic Games in rowing. It's a page of history being written,” he told Africa Calling correspondent Foumilayo Assanvi in Cotonou.

Beninese and journalists had a lot of questions as to just what he does to make it a sport in a country where, with numerous waterways, using a boat for transportation is a way of life.

“It's a sport that is practiced on a boat with oars. We row,” he says he explained to everyone.

While Hinkati says he is very happy to represent his country, he wanted to use the opportunity to shine light on the sport, and the Beninese Rowing Federation.

Lots of water but no equipment
It has not been easy to start a rowing program from scratch in Benin. The lack of equipment is hampering the growth of the sport, says David Gbadamassi, the Rowing Federation president, even though there are now eight rowing clubs throughout the country, and more than 275 members. The Federation only started in 2012.

“This number started to decrease, because rowers haven't the equipment to train. When there are many athletes and few materials, others are frustrated,” he says, adding that they do not have the means to import more equipment.

Although this is part of the problem, the natural propensity for Beninese to use watercraft makes them natural rowers.

“For example, in the lakeside village of Ganvié, people don't move with bicycles, motorbikes, cars, or planes. They use boats. Even five-year-olds have boats, they row to go to school,” says Gbadamassi.

Iwaria: A stock photo company for Africans, by Africans

“They are potential professional rowers—we can take them to this stage. But, without materials, it's difficult to encourage the creation of rowing clubs and youth training,” he adds.

It was also a challenge for Privel Hinkati to find the right equipment in Benin for professional rowing. His qualification is the result of a long and difficult road.

For him, it's a dream come true after he failed to qualify for the Olympic Games in 2012 and 2016. But hard work, lots of training, and crowdfunding propelled him.

“It's a sport that needs huge amounts of money to [take part] -- the competition's boat, for example, costs €14,000 ,” says Hinkati, adding that it also costs money to transport the boat with the oars every time he trains.

The combination of two crowdfunding campaigns and sponsors helped greatly, he says.

Was the road to the qualification difficult? "Hell yes!” he says.

“To qualify, I had to be among the five best African athletes and it's not a small deal,” says Hinkati.

Training with an organized team in Caen, France and sometimes in the United States, where his trainer lives helped him up his game.

And he qualified in October 2019 as one of the best five African athletes.

Harnessing Benin pride
For the Federation's Gbadamassi, Hinkati's qualification provided a big boost to the sport.

“People of the lakeside villages of Bopa or Grand-Popo have been motivated by this to encourage athletes, so that future rowers will be assured,” he says.

One Beninese sports fan, who is also a sports trainer, discovered rowing, and Hinkati, thanks to the Olympian's Instagram page.

“Privel's qualification for the Olympic Games makes me proud and happy, and shows there are people, who defend the Benin flag internationally, especially in sports that aren't promoted,” says sports trainer David Talon.

“We are waiting to see him give his best. Young Beninese, every Beninese and I, are behind him and supporting him,” he adds.

From zero fans to hometown hero, all of Benin is hoping Hinkati will come home with a medal—the first for the country.

“We're the last country in West Africa, that has no Olympic medal. Why not Benin? Rowing will get a medal for this country and Privel Hinkati is on a good road,” says Gbadamassi.