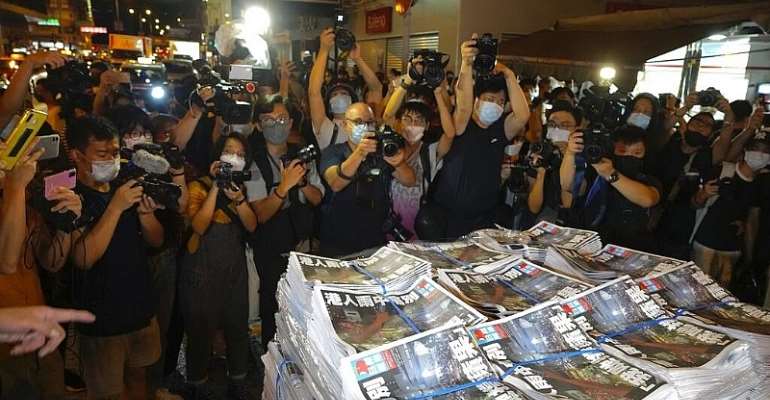 The final edition of Hong Kong's last remaining pro-democracy paper sold out in hours Thursday, as readers scooped up all 1 million copies of the Apple Daily, whose closure is yet another sign of China's tightening grip on the former British colony.

People lined up early in the morning all over Hong Kong to buy the paper, which in recent years became an increasingly outspoken critic of Chinese and Hong Kong authorities' efforts to limit freedoms. The paper was gone from newsstands by 8:30 a.m. local time.

In a statement, the newspaper said it was forced to cease operations after police froze 2.3 million dollars of its assets, searched its office and arrested five top editors and executives last week, accusing them of foreign collusion to endanger national security.

Paris-based media watchdog Reporters Without Borders (RSF) said in a statement it "deplores the suffocation to death of Apple Daily, one of the last major Chinese-language media critical of the Beijing regime.

“The tearing down of Apple Daily, after years of harassment, is sending a chilling message to Hong Kong journalists,” says Cédric Alviani, RSF East Asia bureau head. “If the international community does not respond with the utmost determination, President Xi Jinping will know that he can erase press freedom in Hong Kong with complete impunity, as he has already done in the rest of China.”

"Political turmoil"
Not all agree. The Apple Daily "greatly exceeded the information function of the media and turned into a political revolt-seeker. It has been stirring up trouble and running in the frontline in Hong Kong's growing political turmoil," explains the Global Times, a pro-Beijing, Communist Party controlled newspaper.

Since last year, Beijing stepped in and all but took over politics and policing in Hong Kong by imposing a stringent "National Security Law" that gives police wide-ranging powers detain people, and effectively ended the "one country-two systems" model that was promised to Hong Kong when London handed back its crown colony to Beijing in 1997.

Reacting to the growing chorus of criticism, the Global Times explains that "in European countries, people cannot see an influential media outlet that can behave like Apple Daily to instigate confrontation against the constitution."

China's foreign ministry spokesperson, Zhao Lijian, in a routine press conference, pointed out that "Hong Kong is a society ruled by law, and it is not beyond the reach of law. Press freedom is not an excuse for impunity and whoever disrupts Hong Kong has no extrajudicial privileges."

Broader crackdown
The paper printed 1 million copies for its last edition — up from the usual 80,000. On the front page was an image of an employee in the office waving at supporters surrounding the building, with the headline “Hong Kongers bid a painful farewell in the rain, 'We support Apple Daily.'”

While pro-democracy media outlets still exist online, it was the only print newspaper of its kind left in the city.

The pressure on the paper reflects a broader crackdown on Hong Kong's civil liberties, ramped up after massive anti-government protests in 2019 unsettled authorities. In response, they imposed a sweeping national security law — used in the arrests of the newspaper employees — and revamped Hong Kong's election laws to keep opposition voices out of the legislature.

The result is that dissenting voices have been almost completely silenced in the city long known as an oasis of freedoms on mainland China's doorstep. The increasing restrictions have come despite China's promise to protect Hong Kong's civil liberties for 50 years after the city's 1997 handover from Britain.

Dark day for press freedom
The closure of Apple Daily raises the specter that other media outlets — though none as outspoken — will become even more cautious, such as the more than 100-year-old English-language South China Morning Post. The paper, while identified with the political and business mainstream, has thus far continued to report on controversial issues in Hong Kong and on mainland China, even after its owner, internet business titan Jack Ma, dropped from sight last year after publicly criticizing Chinese government policies.

“Without Apple Daily, Hong Kong is less free than it was a week ago. Apple Daily was an important voice, and it seems unlikely that any other media outlet will be able to fill its shoes, given growing restrictions on free speech and freedom of the press,” he said.