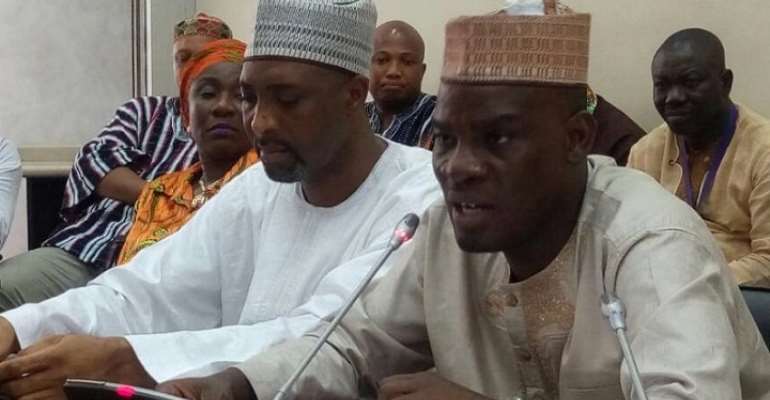 The Minority caucus in Parliament has vehemently denied claims that it was enticed with money to approve President Akufo-Addo’s ministerial nominees.

The caucus has received heavy bashing from a section of the party after approving all nominees on Thursday when the party had earlier asked them to vote against some of the nominees especially those with security portfolios.

Following that move, the National Communications Officer of the NDC Sammy Gyamfi in a tirade berated the leadership of the Minority accusing them of betraying the party for their selfish interest.

Comrades, the betrayal we have suffered in the hands of the Speaker of Parliament, Rt. Hon. Alban Bagbin, the leadership of our Parliamentary group, particularly Hon. Haruna Iddrissu and Hon. Muntaka Mubarak, and dozens of our own MPs, is what strengthens me to work hard for the great NDC to regain power.

“They brazenly defied the leadership of the party and betrayed the collective good for their selfish interest. And we, must not let them succeed in their parochial quest to destroy the NDC, the party that has done so much for them and all of us. The shame they have brought on the party will forever hang like an albatross around their necks,” Mr Gyamfi wrote in a statement Thursday.

However, in reaction, the Minority leader Haruna Iddrisu in a statement said the Caucus has never been and would never be for sale.

“The past few days have been the most difficult for the NDC Minority Caucus in Parliament following the approval of President Nana Addo Danquah Akufo-Addo’s nominees for ministerial appointments. Justifiably, the party’s base and grassroots are unhappy and in some instances have had cause to reject and even condemn the decision of the House to approve the three nominees that went through voting. For many, it is unimaginable how they could pass the test in the hands of the same Minority that secured them a Speaker of Parliament from an opposite Party in the Executive on the 7th January 2021,” the statement said.

It further explained: “The Leadership and entire Parliamentary caucus of the NDC wish to reiterate our commitment to the cause of the great National Democratic Congress. We expressly reaffirm our resolve to hold the Akufo-Addo government to account over the coming days, months and years for their stewardship to the Ghanaian people. This is nonnegotiable. You may be disappointed in this outcome but we will not disappoint or let you down in the future. The Caucus has never been and would never be for sale. We categorically deny all allegations of influence or favour as a consideration for the approvals in the House. It is important to note that we are parties of equal strength with; NDC 137 and NPP 137+1, how we wish we had just 140. We acted in accordance with our oath of office and in good faith and conscience. We hold dearly our founding principles of probity, accountability and social justice in our every engagement on behalf of our Party.

“The Caucus remains loyal to our base and wishes to call for restraint and calm. We ask all NDC faithful to have faith in the Caucus leadership as we navigate our path to recapturing the Presidency in 2024. The Caucus would lead the vanguard with the support of our loyal grassroots. May we always be reminded that the things which bind us as comrades far outweigh whatever may divide us”.

A/R: Over 500 houses earmarked for demolition in Afigya Kwab...
2 minutes ago