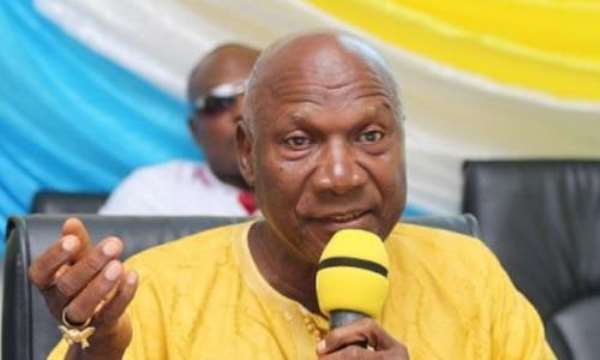 Mischief maker Ayarilie is at it again. This time, it's a ploy to hoodwink NUGS into agitating, against its own interest, that university education becomes totally free. This is the man who tarnished the reputation of the Executive with a dubious tractor deal and has continuously brought the image of the Legislature into disrepute.

He was the compulsive liar originator of the diversionary Agyarko bribery furore that took precious business time of the Seventh Parliament. He was there among the double salary takers; and he was deeply embroiled in the scandal of dodging paying taxes on imported LUXURY vehicles.

He has enjoyed the loot of V8 every four years, plus a mansion, by the Legislature. Along with his unpatriotic colleagues, they have stashed into their private pockets ex gratia payments that, together, could take care of the education of a fair number of university students.

He actively hounded Adamu Sakande to prison and death over dual citizenship. Today, he's hypocritically a key part of the congress wall protecting one of their own from answering dual citizenship questions in court. This person has no credibility and deserves no attention from anyone serious about moving our dear motherland forward in progress.

The history of who cares about citizens being meaningfully educated at minimal or no cost exposes Ayarilie and his congress people. From the beginning of the implementation of the 1951 accelerated education strategy until 1971, tuition and boarding was free for university students. Those from the northern parts of the country were paid transport and clothing allowances.

In 1971, the Busia Progress Party government introduced a loan scheme for students to take care of their boarding and lodging. Tuition was still free. In 1973, Acheampong's NRC abolished the loan scheme and restored the “everything free.” However, that same Acheampong regime would reverse course and re-introduce the loan scheme in 1976.

It was the PNDC government, which overthrew Limann in a coup and later transformed itself into the NDC, that introduced, not a loan scheme, but fee-paying by university students. It is the party of the man who is shouting free at all cost which put a price on university education.

In 1996, at the instigation of the Bretton-Woods World Bank/IMF institutions, the NDC government introduced the Academic Facilities User Fee (AFUF). Before long, it would add Residential Facilities User Fee (RFUF). NUGS was muzzled by bribing to separate the leadership from the student body to kill any opposition. NUGS today should look for the leadership of the NUGS of those yesteryears. Meanwhile, free for students from the northern parts of the country justifiably never changed; even as they have had their fair share of leading NUGS.

But even with the AFUF and RFUF, the universities were still teetering on the brink of collapse when the Kufuor NPP administration assumed office in 2001. In earnest, that government took bold steps to pour money into the Ghana Education Trust Fund (GETFUND) which had been established, but like many things the NDC did, existed only in name with no funds in it.

The NDC had “established” UDS, UHAS, UNER, UMaT – all in name but with no infrastructure to operate. It was the Kufuor administration that built them all up. Note also that the nation was not producing oil at the time. Kufuor had found money, alongside physically building the universities, to prospect and discover oil ready to be mined as a legacy.

The legacy of oil money which could have been used to provide free university education, like Tunisia and Libya were doing with their own, the Mills/Mahama NDC administration splashed on “capacity building” schemes, the results of which they alone can point to now. NDC squandered the oil money.

NUGS of the 1970s had been much about fighting for improvements in the living standards of the citizens of the motherland. In the 1980s, it slipped into becoming complicit with the PNDC in suppression and oppression of the people. A considerable proportion of past NUGS leadership became key actors in the policy and practices of defunding education. Funds for education dwindled.

Even the FCUBE they claimed to be implementing suffered asphyxiation from funds, with shortage of basics like chalk and other inputs. High school was worst. Schools for persons with disabilities were shut because the NDC government denied them the feeding costs. NUGS could not be found because its former leaders were the ones largely running the P/NDC governments.

So if NUGS is looking for relief in education funding, they should look for individuals like Lawyer Akoto Ampaw. They were the nationalists whose efforts catapulted NUGS to international fame for volunteering services in constructing the Dawhenya and Okyrɔko dams; along with facilitating the inception of the National Service Scheme.

If NUGS is looking for a government that would support education, they should be talking to the NPP. At least they have demonstrated variously – with their capitation and free bus ride for schoolchildren as well as the current free SHS – to have the capacity to work out a scheme. They should not allow themselves to be deceived by a cheap popularity fisher.

An Honourable man will say: “Mr. President, please here's my illegal double pay I stole, the taxes on my luxury cars I dodged, the tractor dealings and all the ex gratia I have ever taken. Please ask others in the Fourth Republic, including the estates of the dead as well as the one million dollars a House leader extorted from a telco, plus all the judgment debt Congress paid, to return everything they stole from the State, and let's see if that cannot take care of university students for the 2021-2022 academic year.” That will save the motherland from the antics and crookery going on now.