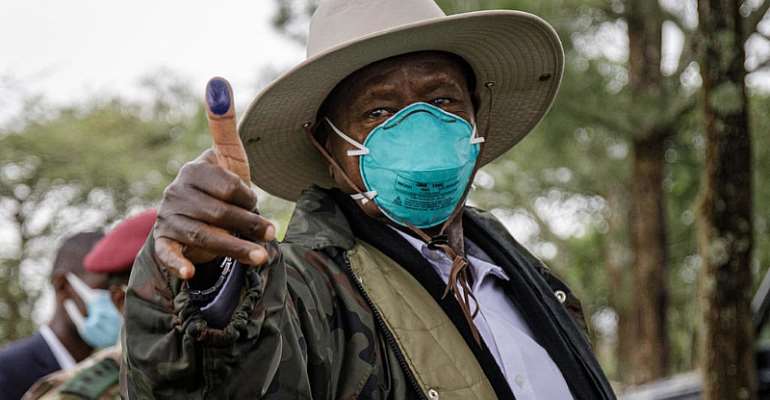 Uganda's long-time President Yoweri Museveni has won a sixth term in office, electoral officials say, in an election which his main rival said was marred by fraud and violence.

Uganda's long-time President Yoweri Museveni has won a sixth term in office, electoral officials say, in an election which his main rival said was marred by fraud and violence.

76-year old Museveni won with 58.6 percent of votes with his main rival, Bobi Wine, trailing on 34.8 percent, according to the Electoral Commission.

Wine, a singer-turned-MP, alleges the election was a sham and the results were rigged, but the Commission denies any vote-rigging in Thursday's poll.

Wine was under heavy guard at his home on the outskirts of Kampala as results were announced.

A spokesman for Wine's National Unity Platform (NUP), Joel Ssenyonyi told AFP Bobi Wine "is under effective house arrest", while the government said it was merely providing him with security.

"People are angry because their vote has been stolen. They don't need me or Bobi Wine to tell them to get angry... Even we can't control them."

Security forces poured into the streets of Kampala after the announcement.

Images on state television showed jubilant Museveni supporters in his home district waving flags and cheering, while soldiers in the capital helped marshall motorcycle drivers for a parade - handing them yellow vests and Museveni posters.

Uganda's election took place after one of the most violent campaigns in years, with harassment and arrests of the opposition, attacks on the media and dozens of deaths.

Wine and other opposition candidates have been arrested on several occasions, and during protests that followed one arrest in November, more than 50 people were killed.

Wine alleged widespread fraud such as ballot box stuffing and said his party agents had in some places been beaten and chased away from polling stations.

Tibor Nagy, the top US diplomat for Africa, said on Twitter that the vote was "fundamentally flawed", citing the denial of accreditation to election observers and "violence and harassment of opposition figures".

The internet has been down for four days, and government spokesman Ofwono Opondo said the measure was taken due to "abuse, misuse, disinformation, fake news with the overall objective of undermining the integrity of the electoral process including the results... and possibly to cause destabilisation".

He said the internet would be restored once the threat had passed, possibly on Monday morning.

Bobi Wine believes the internet shutdown is being used to block communication and as a way of compromising the vote.

"I will be happy to share the videos of all the fraud and irregularities as soon as the internet is restored," Wine said.

Museveni has ruled Uganda since seizing control in 1986 and he is one of Africa's longest serving leaders.

He used to be credited for his commitment to good governance, but the former rebel leader has crushed opposition and tweaked the constitution to allow himself to run again and again.

Many in the country, where the average age is 16, no longer found him relevant or sufficient.

Wine, with his humble origins in a slum and popular songs about economic and social injustice, struck a chord with young people, but observers said the odds were stacked against him with Museveni's powerful grip on the state.

His newly formed NUP party is on track however to become the main opposition party in parliament, notably winning eight of nine constituencies in the capital Kampala.