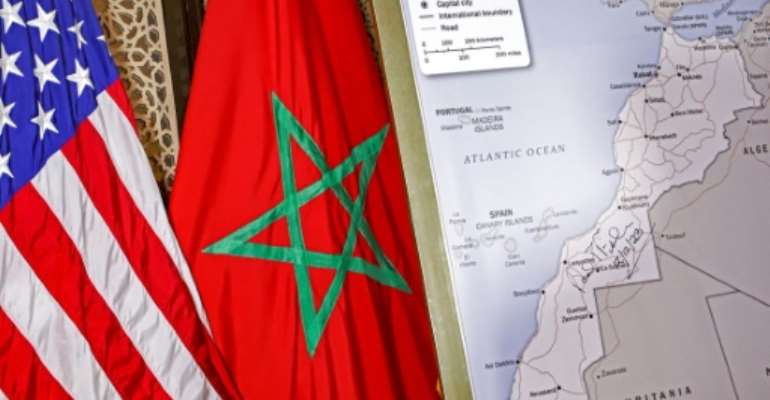 A photograph taken on December 12, 2020 shows US and Moroccan flags next to a US State Department authorised map recognising the contested territory of Western Sahara as part of Morocco. By - (AFP/File)

A top US envoy visited contested Western Sahara on Saturday, after Washington recognised Morocco's sovereignty there in exchange for Rabat normalising ties with Israel.

Western Sahara is a disputed and divided former Spanish colony, mostly under Morocco's control, where tensions with the pro-independence Polisario Front have simmered since the 1970s.

In return, US President Donald Trump fulfilled a decades-old Moroccan goal by backing its contested sovereignty over the barren but phosphate-rich region, which lies next to rich Atlantic fishing zones.

The US Embassy in Rabat called the trip by David Schenker, Assistant Secretary of State for Near Eastern Affairs, and the highest-ranking US diplomat for North Africa and the Middle East, "a historic visit". 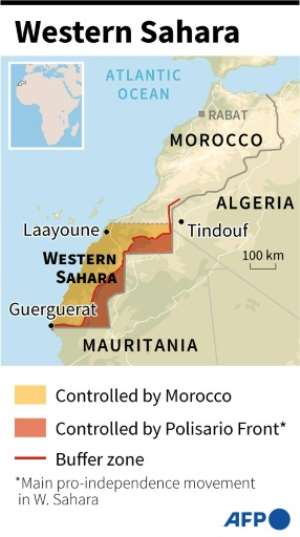 Schenker, who is on a regional tour including Algeria and Jordan, also visited a United Nations base in the region, MAP said.

UN peacekeepers in the Western Sahara are mandated to organise a referendum on self-determination for the region, and despite Washington's move, the UN insists its position is "unchanged".

Schenker's visit comes ahead of the expected opening of a provisional US consulate in the desert region on Sunday, according to diplomatic sources in Rabat.

Last month the US State Department announced it would open a "virtual" diplomatic post in Western Sahara before building a consulate, slated for the southern fishing port of Dakhla.

Joe Biden, who will replace Trump as president on January 20, has not publicly commented on Western Sahara.

"Every administration has the prerogative to set foreign policy," Schenker, speaking in his previous stop in Algeria, but ruling out any US military presence in Western Sahara.

But, he said, "let me be clear: The US is not establishing a military base in the Western Sahara."

Over a dozen countries have already opened diplomatic offices in the territory, including the UAE and several African and Arab nations.

The Algerian-backed Polisario Front, which fought a war for independence from 1975 to 1991, considers such moves violations of international law.

While the Western Sahara is home to fewer than a million people, it offers Morocco rich phosphate resources, fisheries and a key highway to Mauritania and the rest of West Africa.

In November, the Polisario announced it regarded a 1991 ceasefire as null and void, after Morocco sent troops into a UN-patrolled buffer zone to reopen the road.

Reason why Kwame Nkrumah's children were prevented from seei...
32 minutes ago