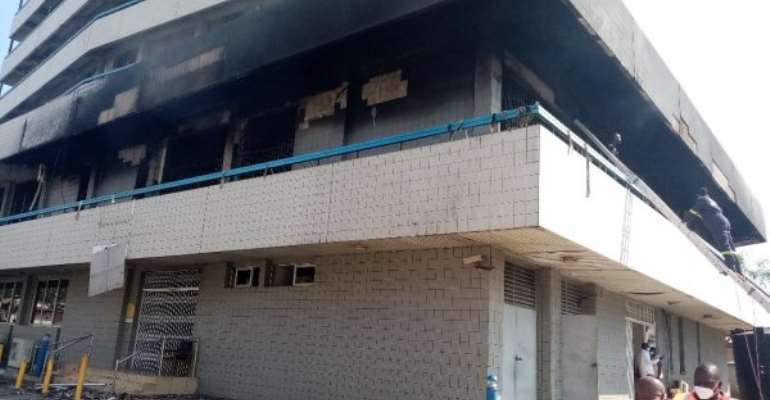 It has emerged from initial investigations that the Saturday morning fire that caught the Liberty House branch of the GCB Bank in Accra, started from a storeroom where sanitizers, papers, and batteries had been packed.

Mr. Ellis Robinson Okoe, Divisional Officer 1, the Public Relations Officer (PRO) of the Ghana National Fire Service, told the Ghana News Agency (GNA) that, “only a small part of the first floor of the building got burnt,” and that firefighters determined the cause of the fire in time.

Mr Okoe said his office got a distressed call around 1059 hours that the GCB Liberty house branch was engulfed in fire and rushed to the scene with eight fire tenders.

He said the personnel within an hour, brought the fire under control and stopped it from spreading to other parts of the building.

The PRO commended the Police and the Bank's security men for ensuring people did not take advantage of the situation.

Madam Stella Ackah, a trader at the entrance of the Bank, said around 0700 hours they saw smoke from the first floor of the building and informed the security guards who told them they were fumigating the place.

She said after a while, the smoke became heavy necessitating the placing of calls to the Fire Service.

Madam Ackah commended personnel of the Fire Service for preventing the fire from extending to other parts of the Bank and surrounding shops, adding that some traders fled with their wares when the smoke became very thick.

Meanwhile, a source at the Bank told the GNA that management of the Bank was in an emergency meeting and would issue a statement on the incident soon.