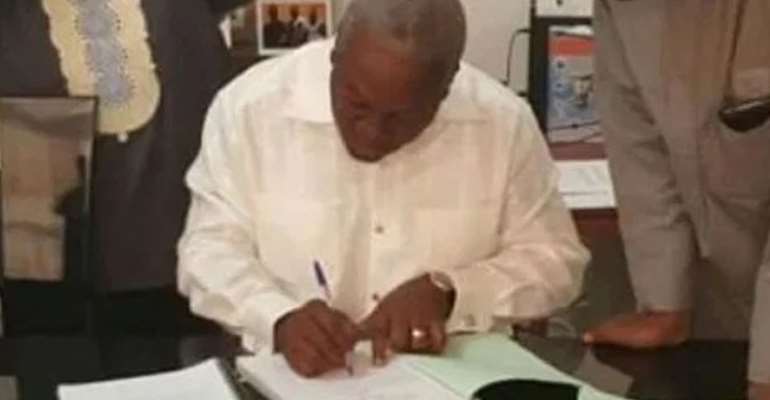 When former President John Mahama recently took a swipe at the inappropriate language by politicians which he said was listened to by “our children” we thought voila we were on the verge of witnessing a new John Dramani Mahama.

We also thought he had educated his “sharp-teethed boys' particularly their Goebbels, to be mindful about their language so decency would return to our political space once more.

Our excitement was short-lived. His description of Special Prosecutor Martin Amidu as 'stupid' and not being man enough was for us, un-statesmanlike.

Those who listened to the remarks were taking aback by his use of abrasive words.

Our former President should consider managing his adrenaline level just so he does not go overboard during his political talks.

He is angry and anger does not deliver the message appropriately. He has ended up having people considering his language rather than the message he seeks to deliver to his audience as he crisscrosses the country.

The cacophony continues. Mr. Amidu would respond with a long treatise perhaps. He could be releasing this within the next few days and expectedly this would contain equally harsh language for both adults and children.

We can bet Ghanaians are already expecting the Amidu response.

We just wonder whether some of our politicians do not appreciate the importance of managing language during deliveries.

Many years ago children were encouraged to listen to radio so they can learn English and polish it orally.

The radio and social media are beginning to threaten our values, as the politicians with axes to grind their opponents use them to vent their spleen in a manner which is anything but acceptable.

We must teach our children critical values and etiquette so that they would grow up to become responsible citizens.

It is unfortunate that the politicians who continue to foul our national ambience with their harsh and offensive language are products of days when values and etiquette constituted a cornerstone of our society.

Today they have disappointedly abandoned the values they learned from their parents and teachers and treading on this ignoble path of vitriolic and disrespect for their colleagues and subordinates.

When the word 'stupid' is spewed by someone of the caliber of a former President, of course a role model to others, there is cause for us to get concerned and even apprehensive.

It must be time we taught our children which persons should not be considered role models.

Those who exude deference for our values, respect others among other qualities qualify to be emulated in their conduct in public and private life.

If we fail to do so we would end up having kids admiring the bellicosity, uncouthness, imbecility, mendaciousness and intemperateness of persons who held critical public office previously.