‘Everything we stand for is at stake’: Diversity teachers wary of Trump win 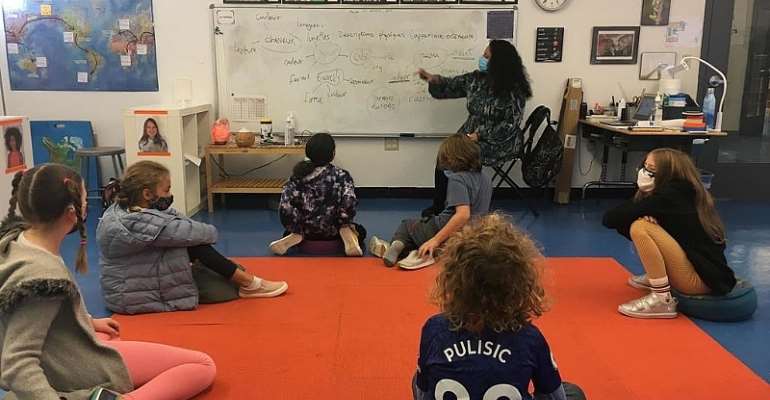 Against the background of a national reckoning on race in the US, teachers in New York are encouraging their students to tackle bias from an early age, but are worried diversity training could suffer under a second Trump term.

Children's chatter fills the halls of the Science, Language and Arts International School (SLA) in Brooklyn, now open again after a Covid lockdown.

Displyed on the walls of each classroom are self-portraits of the students, aged between two and ten years old.

“The drawings are done with oil pastels,” explains Jennifer Wilkin, the school's director, who says that pupils are taught colour theory from the age of four.

“In kindergarten, they try to match their skin tone. This goes with the whole conversation about skin colour. Many Americans are taught not to talk about skin colour, we try to not make it a taboo subject,” she told RFI.

Making children culturally aware and accepting of themselves and others is at the heart of the SLA's equity curriculum.

This anti-bias education is not new, but has taken on particular significance at a time when the US is facing a racial reckoning spurred by the death of George Floyd and a wave of Black Lives Matter protests.

“Imagine there's a girl in a bar, what could we say to avoid stereotyping her?” she asks in French, one of the two main languages taught at the school.

“We're trying to teach them very early on how to accept themselves and others,” she says.

“The way to do that is to give them the words to describe their physical appearance. We do this with kindness, we do this with inclusion and as they develop that kind of vocabulary, they are able to understand the ways in which we are both similar and different.”

Like most teachers and students in the school, Barker was born to immigrant parents. Her Mauritian father and Portuguese mother moved to France when she was young and she later grew up in Belgium, before coming to the US.

The forty-year-old discovered anti-bias education four years ago, in what she says was a “transformational moment”.

“I have been on this journey ever since. It is one of those things where, once you know, you can't unknow, and there's nothing else we can do. We have to work at it.”

School director Jennifer Wilkin has been tackling unconscious bias since the SLA's creation in 2011. Today, however the 52-year-old is worried about the potential harm a second Trump presidency could have on her school and her students.

For Wilkin, who became involved in the bilingual community after quitting her career as a classical violinist, Donald Trump is the antithesis of everything her school stands for.

“The idea that the president could win another four years and be someone who does not care about racial justice or the beautiful and wonderful diversity of our country and the founding principles of this country, which was, you know, based on immigration. It's just a very scary time here,” she said.

Students like Robert Cabbage are not convinced by Trump either.

“I hope Donald Trump doesn't win,” he said.
"I hope Joe Biden wins because he's going to be better for the country. He looks nicer,” Cabbage told RFI.

In the wake of an election campaign that has exposed deep cultural divisions, teacher Jessie Barker wants anti-bias training to move from the classroom into the outside world.

“If you only do it in the classroom, the work is half done. We need the parents to buy in so that these conversations can continue at home.

"And more than that, adults need to do their self-work to see where their biases are, because we are the problem,” she said.