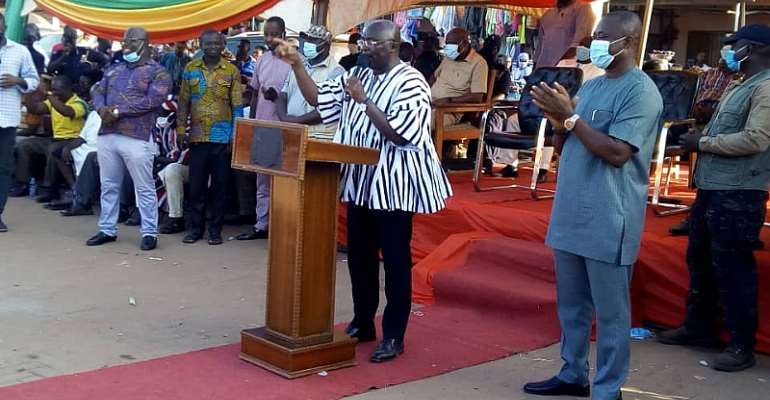 The Vice President, Dr. Mahamudu Bawumia has assured the people of the Atebubu-Amantin municipality of the government’s plans to build a modern district hospital in Atebubu under a programme to provide hospitals for 111 districts throughout the country which designs have been completed and awaiting take-off.

He made the disclosure when he addressed a durbar of chiefs and people of Atebubu as part of a two day tour of the Bono East region.

The Vice President enumerated several achievements by the current government which includes: free senior high school education, restoration of nurses, teachers, and Arabic instructors allowances, one constituency one ambulance, one district one factory and one constituency one million dollars adding that work is also currently on-going on the 100km Atebubu-Kwame Danso-Kojokrom road.

Dr. Bawumia averred that the New Patriotic Party has shown faith with the people of the Zongos by establishing a ministry for Inner Cities and Zongo Development and the subsequent Zongo Development Fund saying the face of Zongo communities throughout the country will change with time.

He said 40 Zongo youth both male and female have been sponsored by the government to study medicine in Cuba while the government will soon establish one model senior high school in a Zongo community in each of the sixteen regions of the country.

The Akwamuhene of the Atebubu traditional area Nana Baffour Gyan praised the NPP government for the ‘free SHS’ program which he said has come as a relief to most parents.

He said his own Duabone community is a beneficiary of the numerous road projects currently on-going in the municipality and urged the Bono East regional minister, Hon. Kofi Amoakohene who also doubles as Member of Parliament for Atebubu-Amantin and the Atebubu-Amantin municipal chief executive Hon. Edward Owusu remain focused in bringing development to the people.

He asked them to do everything possible to solve the water problems faced by residents of Atebubu and also called for the installation of traffic lights at vantage points within the Atebubu township to help reduce the spate of motor accidents.

The Vice President and his entourage presented 6 crates of soft drinks, 6 cartons of bottled water, 6 bottles of schnapps, and an undisclosed amount of money to the traditional council in support of this year’s Foryawo yam festival.

Ghana running into unsustainable debt levels topping 80% of ...
15 minutes ago