Arabs favour Biden over Trump in US election: poll 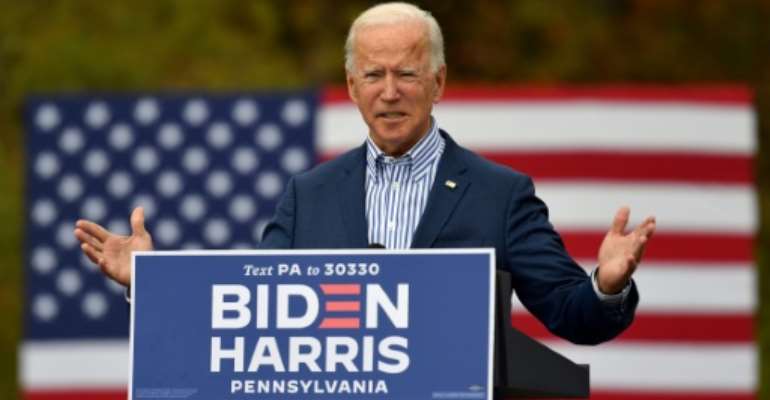 Out of 3,097 people polled across 18 Middle East and North African countries, around 39 percent favoured Democratic presidential candidate Joe Biden (pictured October 24, 2020) while only 12 percent opted for US President DonaldTrump. By ANGELA WEISS (AFP/File)

Out of 3,097 people polled across 18 Middle East and North African countries, around 39 percent favoured Biden while only 12 percent opted for Trump, according to the survey carried out by British pollster YouGov and commissioned by Saudi daily Arab News.

"When asked which candidate would be better for the Arab World if elected president, most believe that neither candidate (49 percent) would fulfil such a description, yet Biden is still considered a better option to Trump," the survey said.

The November 3 election, in which incumbent Trump is fighting to secure a second term in office, is being closely watched across the Arab world, where the United States plays a key role.

Trump is widely seen as the preferred candidate among a slew of Arab governments, including Saudi Arabia and the United Arab Emirates, for an array of reasons including his tough stance against their regional rival Iran.

But the poll reflects a different public opinion.

"If the Arab world were choosing the next president, Biden would win by a landslide," YouGov's chief Stephan Shakespeare told AFP.

"But that's partly because they don't know much about Biden -- only half say they have heard of them, while nearly everyone has heard of Trump."

Should Biden win, some 58 percent of Arabs said he "must distance himself from the Obama administration policies."

Biden served as vice president in the Obama administration.

Trump won some support in the poll for scrapping an Obama-era nuclear agreement with Tehran and imposing strict sanctions against the Iranian regime, but only 17 percent Arabs felt his stance would made the region safer.

The poll suggested Trump's 2017 decision to move the US embassy in Israel to Jerusalem proved overwhelmingly unpopular, with 89 percent of Arabs opposing it.

The poll listed youth empowerment, the Arab-Israeli conflict and the global coronavirus pandemic among the top three concerns Arabs would like the next US president to focus on.