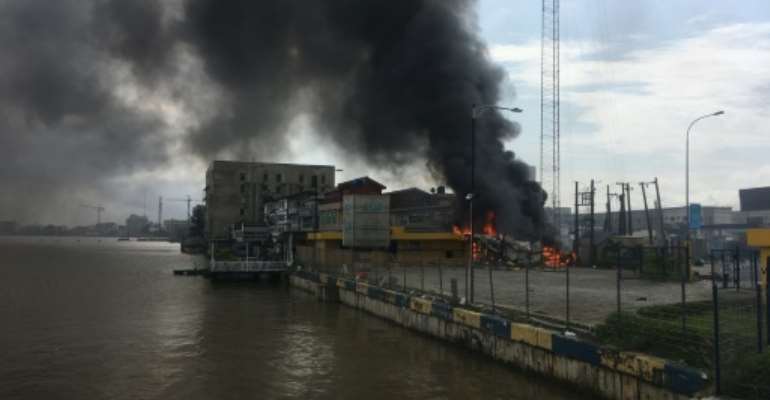 A building burns near the Lekki toll gate, epicentre of the Lagos protests. By SOPHIE BOUILLON (AFP)

Buildings were torched in Nigeria's biggest city Lagos on Wednesday as authorities shut down the economic hub after the shooting of peaceful protesters by security forces caused international outrage.

At least 12 people were killed by the Nigerian army and police in two locations in Lagos on Tuesday in a deadly crackdown on demonstrations, Amnesty International said.

Peaceful protesters had gathered despite a curfew imposed to end spiralling protests over police brutality and deep-rooted social grievances.

"Evidence gathered from eyewitnesses, video footage and hospital reports confirm that between 6:45pm (1745 GMT) and 9:00pm (2000 GMT) on Tuesday 20 October, the Nigerian military opened fire on thousands of people," Amnesty said in a statement.

The Lagos governor at first insisted no fatalities had been recorded but later said the authorities were investigating the death of one person resulting from "blunt force trauma to the head".

He said at least 25 others were wounded.

Demonstrator Paul Sunday who was at the scene told AFP that the men who shot at the crowd were wearing masks and had army uniforms.

"They attacked us from back and from front," he said. "They came around 7pm when everywhere is dark."

Pictures and videos showing scenes of chaos in the aftermath of the shooting were widely shared on social media.

The shooting drew international condemnation, with UN High Commissioner for Human Rights Michelle Bachelet saying reports suggested it could have been premeditated.

"There is little doubt that this was a case of excessive use of force, resulting in unlawful killings with live ammunition, by Nigerian armed forces," she said.

"Reports that CCTV cameras and lighting were deliberately disabled prior to the shooting are even more disturbing as, if confirmed, they suggest this deplorable attack on peaceful protestors was premeditated, planned and coordinated."

Nigeria, where the median age is 18, is a tinderbox of profound economic and social grievances, and the demonstrations  have snowballed from anger over police violence to broader demands. By PIUS UTOMI EKPEI (AFP)

Human Rights Watch corroborated reports that the Nigerian army had opened fire on the crowd in "a shooting spree".

"The authorities should immediately withdraw the military from the streets," said Anietie Ewang, a Nigeria researcher with the rights group.

The Nigerian army did not respond to AFP's requests for comment but on Twitter it called reports of soldiers firing on protesters "fake news".

The centre of Lagos, a sprawling city that is home to 20 million people, was largely deserted and shops closed on Wednesday under a curfew.

An AFP journalist said several buildings were burnt around the area of the shooting and remnants of violence -- broken glass, torn banners -- could be seen.

A few people were drifting around, but Lekki Toll Gate had emptied out, only graffiti denouncing police violence and bad governance remained.

A dozen soldiers and heavily armed police officers patrolled nearby.

In another district a bus station was set ablaze and there were sporadic clashes between bottle-throwing youths and police, who occasionally shot into the air.

A TV station linked to one of the ruling party's most powerful politicians was also torched.

Concerned by the escalating violence reported on Wednesday in a string of cities including Lagos, the International Committee for the Red Cross called for restraint.

"It is of paramount importance that first responders and ambulances are respected by all, so they can reach injured people safely," said Eloi Fillion, head of the ICRC delegation in Nigeria.

Lagos state governor Babajide Sanwo-Olu, in a televised broadcast, ordered all "state activities" to be halted across the city for three days.

He said he had asked for a probe into "the rules of engagement employed by the men of the Nigerian army that were deployed" at the scene during the shooting on Tuesday.

In South Africa, the continent's other economic powerhouse, hundreds of people took to the streets on Wednesday to voice their outrage at the shooting. By Phill Magakoe (AFP)

Sanwo-Olu had announced an indefinite curfew from Tuesday afternoon in Africa's largest city after claiming that criminals had hijacked the wave of demonstrations that erupted two weeks ago across the country.

The police chief also ordered anti-riot units to be deployed around the country.

President Buhari was yet to directly address Tuesday's incident but in a statement on the protests the presidency said he had appealed for "understanding and calm across the nation".

Nigeria, where the median age is 18, is a tinderbox of profound economic and social grievances.

British Foreign Secretary Dominic Raab said on Wednesday he was "deeply concerned" by the clashes.

"The Nigerian government must urgently investigate reports of brutality at the hands of the security forces and hold those responsible to account," he said in a statement.

Since Tuesday, Rihanna, Beyonce, Ugandan pop star-turned politician Bobi Wine and Manchester United striker Odion Ighalo added their names to a list of celebrities who have supported the protesters.